In previous projects I have researched the science behind the elements but I would like to take a more conceptual and physical approach with this part of the project. 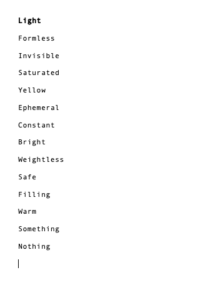 I began by coming up with some words I associate with light. I wrote down some words I think best describe light without going into the science of it and focused more on how it makes you feel and the physicality of it.

I left space at the bottom to continue to add to it throughout the project. Very much inspired by Francis Alÿs’s ‘A Personal Repertoire of Possible Behaviour While Walking the Streets in London Town’

I decided to do this with the lost videos and sound clips I made in part one of the project. I can’t get the videos back but if I describe what heard in them, does it make it just as important/valid as the real thing? if not more? as it now has the theme of loss within it. 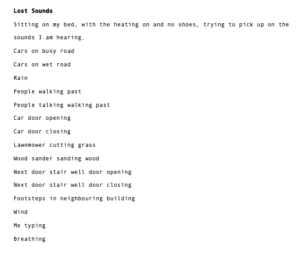 I like the idea of writing down something you experience in a specific place that no-one else could experience unless they were there at the exact same time in the exact same place, but even then they may pick up on different sounds than I did.

Writing the sounds/happenings down, I think leaves the viewer to imagine what they sounded like, what the lost videos looked like, creating a completely different experience every time. Which in hindsight may be better than the videos and audio clips ever where.

I chose to type in web font instead of hand written because I wanted give a nod to the times we are in, where everything is done online at the moment. It also is an in-between in terms of physicality, something but nothing, like light.

I came across Alÿs work during the presentation for this project. He was introduced under the ‘intervention space’ heading and I ant heard of this type of art before. Finding this piece by him was encouraging as I had already written down a list of adjectives for light. I was inspired but his layout of the piece but also the viewer participation aspect.

What I also like about it is the story telling aspect, all seven of the panels he made for this series tells a story of his walk through London and the journey he went on and what he encountered. Again this is something out of my comfort zone but I am enjoying thinking about it and putting it into relation of my own practice. 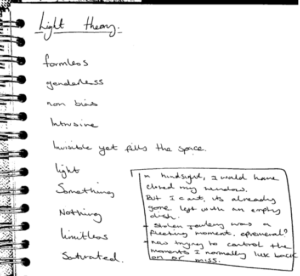 Location draws attention to the relationship between a work and its immediate surroundings. Four small arrows point towards the floor, the ceiling, and the walls on either side of the work. When it is positioned in the gallery, the meters next to each arrow are adjusted to register the distance in feet to the edge of the room. As well as precisely recording the location of the work, these measurements make viewers aware of their own relation to the space.

This piece is relevant for what I plan to do with light. It has made me think about how I can use light for more of the process rather than it just be the main piece. It isn’t just light I want the viewer to address and experience, it is the space in which the light exists and fills as well.

Morris has done something that I find very interesting, which is make something physical and give form to an action, a feeling. This small lead plate give you the tools to sit, observe and experience something completely different from the way you did before. I hope to use light in a similar way.

I saw Edward Ruscha’s work in the Gallery of Modern Art a few years ago and to be honest I didn’t think much of it at the time other than enjoying the size of the canvas he had chosen to write a single or few words on. Doing a little more research now, I like his work no more than I did before but I find what he says about the way he works and why he has chosen to focus on text very interesting and inspiring.

“not bound by reference”

“setting the tone for a given subject”

These are just some of the quote I wrote down while listening to a few talks and interviews from Ruscha while speaking about his work.

He mentions that he likes words because they are not bound by any size reference and he can make the decision whether it be small or huge. This is something I like about light, the fact it has no one form.

The feedback given to me about part one was; what was it I wanted to audience to understand and experience. To continue onto part two I think I have to answer/ reflect on this first.

I left part one with my experience of theft, was a result of something I did and my actions lead to somethings being taken from me and reflecting on the feeling of hindsight. It showed me trying to control hindsight in some way and an overall theme of loss.

Going back over it all it has lead me back to my fascination with ephemerality, light and the physicality’s of it.

My understand of the light is that if I open my curtains, I am inviting the light in, yet even when I don’t it still intrudes my space. I relate this to opening my window and having someone come into my space uninvitedly. 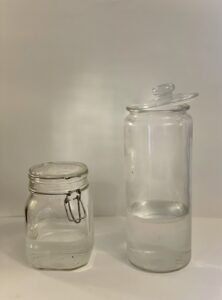 This is the final image for this Project. This work is farrrr from being finished quite clearly as I haven’t done a lot of doing, despite a fair bit of thinking. I think there are many branches I could go to and explore with developing this further and I will continue it on into the next part of this project.

Having the jars ajar is something I done intentionally as I enjoy subtle humour (if you can call it that) in my work, but I like it more because it is relevant to the story telling of the piece.

I like how conceptual this project is turning out to be as I don’t normally go down that route but I am really enjoying connecting the dots throughout and upon reflection. 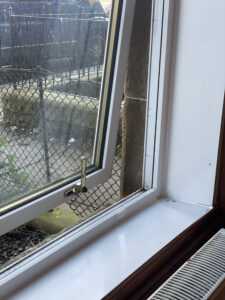 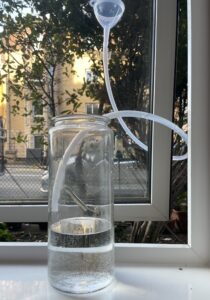 Here is the recreation of the snow coming into my room using rain water. Rain water does not have the same effect as it doesn’t represent loss in my mind but the fact that I don’t have the original documentation of the first trial of this idea, is ironic. Seeing I had to recreate it because I lost the original, could be relevant. Loss

These three images are of the original melted snow from the first experiment. I have retaken images of it here with the lid to the jar closed, un-latched and wide open. I am not sure what I was doing when doing this but I think each one says something completely different. Still to figure that out I think.

In both it was important to me that the liquid was collected in a see through container (like the box from my first idea) to represent the blurred lines of private and public aspect of a traditional gallery institution (white cube). 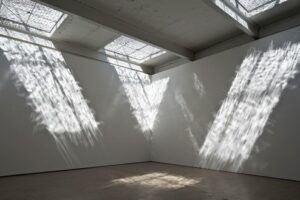 I like the idea of when going to see a piece by Richard Wright, you know that you are never going to see it again as they are often temporary, much like the subject matter and materials used.

This to me eradicates hindsight, as you often don’t realise at the time, in everyday situations, when the last time you will see something or someone. so to know that ahead of time is very powerful to me.

Wright also works directly onto site specific surfaces, which draws attention to the existing space rather than reinventing. This is something I would like to do as dealing with the subject matter of loss, it feels inappropriate to create something, adding something physical to the space. 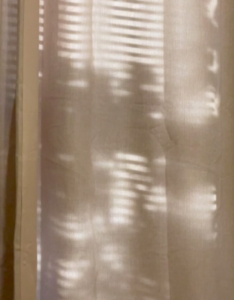 Some thoughts about having my curtains drawn, window and door closed but sitting experiencing the outsides elements through sight and sound. 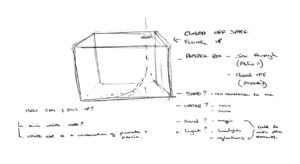 For this project we were asked to chose a specific space to work from (social, virtual, intervention etc) and I chose site responsive, the site being my flat/bedroom.  This idea of blurring the lines of private and public made me consider the white cube as a space also as the traditional gallery space is a public space but also has an elitism quality and history attached to it making it a ‘private’ space to many.

This lead to my initial idea of having a perspex box that is see through and having something from the outside spilling into.

I liked this idea and what it represented but I didn’t want to make something additional to add to the space but rather respond to what’s already there or what was taken. 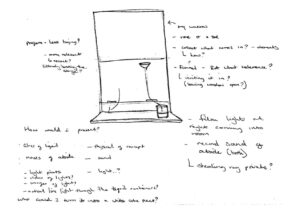 I then came up with the idea of recreating the situation the way it was the night my items were stolen from me (setting the stage). This felt more relevant to me than creating something to add to the space, I liked the idea of extracting from what was already there and drawing focus to it.

I decided to do this when we had heavy snow in Edinburgh. The idea was to have a funnel attached to the outside and have it coming into my room while the window was ajar. This to me, was to show a physical element from the outside coming into my space through chance. By placing the funnel there was the equivalent to leaving my window open. snow may or may not have landed in the funnel the same as to someone may or may not steal my jewellery.

The snow also represented loss, ephemerality and hindsight as I knew it would melt and would only get to enjoy it as it first was for a short amount of time.

I had done this and documented the before and after of the snow filling up a portion of the jar along with videos and sound clips of light coming int my room and sounds from the outside recorded from inside my room but unfortunately all this documentation was filmed on a phone that I completely broke 2 days later before uploading it to my blog.

I still have the jar of melted snow but I recreated the scene with rain water afterwards.