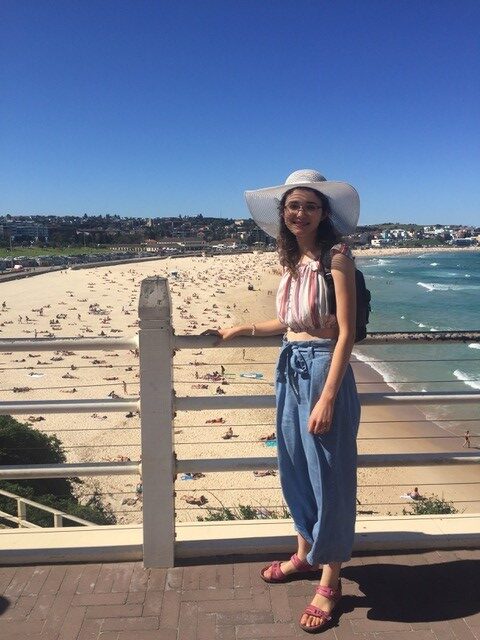 4th year Physics student Lily looks back at her study exchange in Australia, and tells us about the academic and social life at the University of Sydney.

I wasn’t originally intending to spend a year studying as far away as Australia. When I started my degree four years ago I wasn’t even intending to study abroad. However, as time went on I realised that this opportunity was too large to pass up, so I applied to spend my 4th abroad. Thanks to the flexibility of Edinburgh’s degree programmes it was simple for me to make this choice three years into my degree.

And so the journey began..

I applied for a General Study Exchange and I was allocated the University of Sydney (USYD), almost directly on the other side of the globe. As someone with a fear of flying, this may seem like a surprising choice. However, spending a year living in Australia was something that I would probably never do otherwise. Going abroad as a student is the one of the simplest ways to try living in another country for an extended period. Therefore I decided to face my fear and go ahead with it.

I’m so glad I did! Even though my exchange was cut short by COVID19, I got to have the most exciting 8 months of my life so far. The university campus is beautiful and Sydney is an amazing city; there is tonnes to do in terms of cultural activities, bars, shops and cafés (Australian coffee is excellent). It’s surrounded by extensive beaches and national parks easily accessible by train. For me, the crowning jewel is the view of Sydney Opera House and the Harbour Bridge. However, it’s also very important to be aware of the original Aboriginal custodianship of the land here and throughout Australia, and the terrible impacts that colonialism had and still has on Aboriginal people. The need to educate yourself at least somewhat on the history of your exchange country is something to be aware of wherever you might be going.

An advantage of going to the Southern Hemisphere is that the long summer holidays fall in the middle of the exchange from December to February, so there’s the opportunity to travel. I was lucky to be able to take full advantage of this, and managed to cram in many of the tourist hotspots of Eastern Australia such as the Great Barrier Reef, camping in New Zealand’s Southern Island and even a few weeks volunteering on a farm in Tasmania.

Of course, it isn’t all fun and games since you still need to study! The teaching style at USYD is very similar to that of Edinburgh, yet the Australian and UK education systems don’t match up perfectly. At USYD, undergraduate physics is taken as a major or minor as part of a three-year Science degree. This means that all third year students only take up to half of their course load from the School of Physics, leaving a lot of space to study other subjects. People often choose courses from maths or chemistry, but it’s also possible to study something unrelated to physics. This can optionally be followed by an Honours year, which is very similar to a UK Masters. I found that the content that most closely matched Edinburgh 4th year physics was spread across undergraduate and honours level. Had I gone in 3rd year, which is also possible, the content would have matched up far better.

The key to studying abroad is the willingness to be flexible. I found that USYD was flexible in allowing me to tailor my programme of study; it’s simply a matter of asking. It’s also worth noting that you don’t need to have your whole programme planned out before you go. Most of mine fell into place after I arrived. I got to study things that aren’t taught at Edinburgh such as plasma physics and photonics, which ended up being my favourite course in my degree so far. I also took things I wouldn’t necessarily have chosen or been able to choose at Edinburgh such as quantum field theory, which is in the realm of theoretical physics. I was also able to take a geophysics module, and managed to arrange to do a small optics research project as well. I found that there was less academic support since there isn’t a personal tutor system, but I remained in contact with my personal tutor at Edinburgh throughout.

A highlight of my exchange was the chance to be a fresher all over again and meet lots of new people. Like Edinburgh, USYD  has a thriving student life with many clubs and societies. There’s also a variety of support systems available such as free counselling. I made some great friends who I hope to stay in touch with for a long time to come. It’s important to be prepared for challenges as well. For example, I initially found it hard to make friends on my courses having arrived into pre-formed friendship groups. And I didn’t expect the record-breaking bushfire season, which lead to air smoky enough to set off the fire alarms inside the university library and red sunlight in the middle of the day. However, the challenges that come with studying abroad are a great way to improve your independence and resilience.

Overall, it was one of the most eventful 8 months of my life. There were fires, floods and then a global pandemic. I took some really interesting courses that have affected the path I want to take within physics. I got to see rainbow lorikeets and giant bats in the trees as I walked around campus and see stars I’d never seen before in the Southern sky. When we’re finally able to travel freely again, I know that I want to go back some day.

Studying physics ‘down under’: international exchange in sunny Sydney / School of Physics and Astronomy by blogadmin is licensed under a Creative Commons Attribution CC BY 3.0