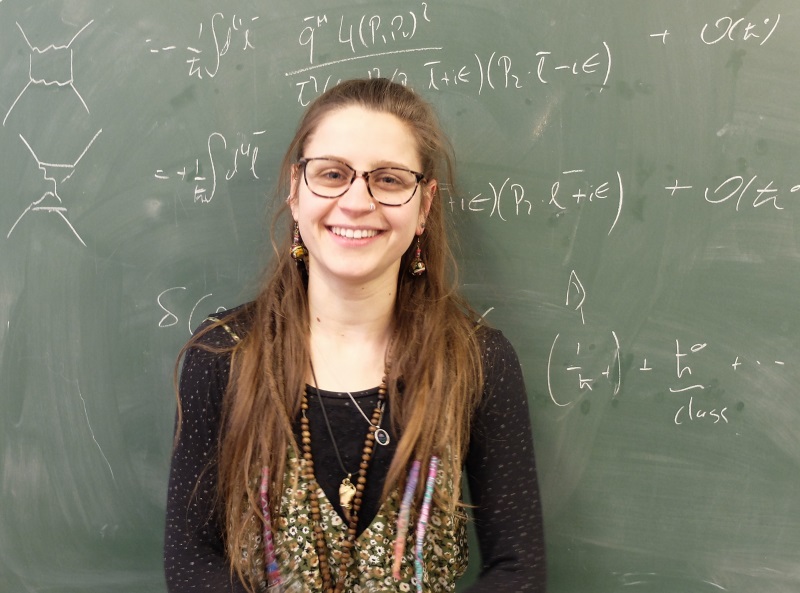 As Emily Pender starts her PhD, she reflects on why she applied to study the MSc in Particle and Nuclear Physics, and how this degree has helped prepare her for her research project.

I chose to apply to Edinburgh because of its reputation as both an excellent University and because of the developments following the discovery of the Higgs Boson in 2012. I was enrolled on an integrated Masters degree (combined Masters and Bachelors degree) at my previous University, but as I knew I wanted to end up specialising in particle physics, I thought it would be more beneficial to undertake the Masters in Particle and Nuclear Physics at the University of Edinburgh than continue studying a generalised physics degree.

I undertook this Masters in its inaugural year, and after a slight fluctuation in student numbers at the beginning of the year, we settled down to a grand total of six. I found such a small number to be a really great thing, as we all got to know each other very well, and are all still good friends a year later.

The only courses unique to our degree were those to prepare us for our dissertation in Particle and Nuclear Physics. They involved reading the relevant background and papers describing the current state of the field of interest within particle or nuclear physics and writing a report on our findings to get us accustomed to the scientific way of writing. Aside from this, there was a broad spectrum of other courses available to us which were also available to theoretical and mathematical physics Masters students and integrated Masters students. I took two courses in particle physics, two in nuclear physics, one double credit course in programming, data analysis and machine learning alongside a few more theoretical courses.

As I was really enjoying my experience at Edinburgh, I applied for a PhD in the department, and in April I was awarded funding for this. I found my Masters project gave me a great opportunity to become accustomed with the way in which research is carried out in the field.  More specifically, it gave me a chance to learn the techniques and software used on the ATLAS experiment at CERN, which are tools I will continue to use during my PhD.

My PhD project is based within the Particle Physics Experiment (PPE) department and is focussed on the search for so called dark photons using the ATLAS detector. Dark photons are the lightest particle of a theoretical ‘hidden sector’ of particles that are not directly visible in current high energy experiments. Their existence is postulated to explain the existence of dark matter, whose presence in the Universe is inferred only from its gravitational influence on ordinary, luminous matter. In this theory, the hidden sector also interacts, very weakly, via weak nuclear force. It is through this interaction with which we aim to either discover or exclude the existence of this hypothetical particle.

Find out more about MSc and PhD opportunities at the School of Physics and Astronomy.

Reflections on the MSc in Particle & Nuclear Physics / School of Physics and Astronomy by blogadmin is licensed under a Creative Commons Attribution CC BY 3.0