Moel Hiraddug is a small limestone hill in eastern North Wales, better known as “that hill near Dyserth with the huge quarry in it.”  Although the geology is different, Moel Hiraddug resembles Traprain Law in having had a substantial fraction of itself removed by quarrying.  It is easily visible from various major roads around Rhuddlan, Rhyl and Bodelwyddan, but, despite having visited the area regularly for many years, I had never been to the summit. To avoid car use, and to make a decent-length walk, we started off from the village of Gwaenysgor, but you could easily make a far shorter walk of it by parking in Dyserth. 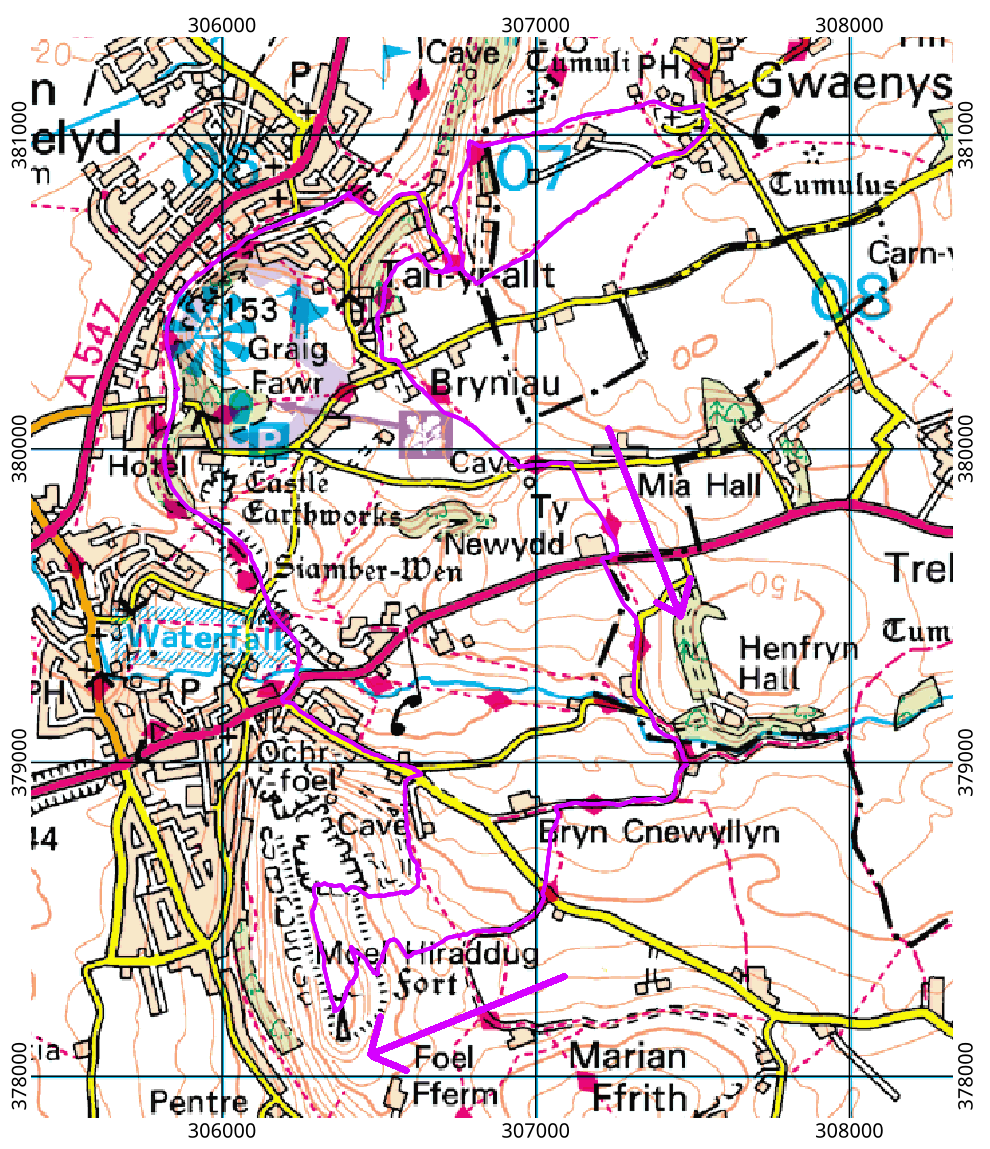 The Offa’s Dyke path can be reached from Gwaenysgor by a variety of routes. Having reached it, we followed it for a good distance along Prestatyn Hillside and across many fields. There are clear views of the hill from many places along the path. 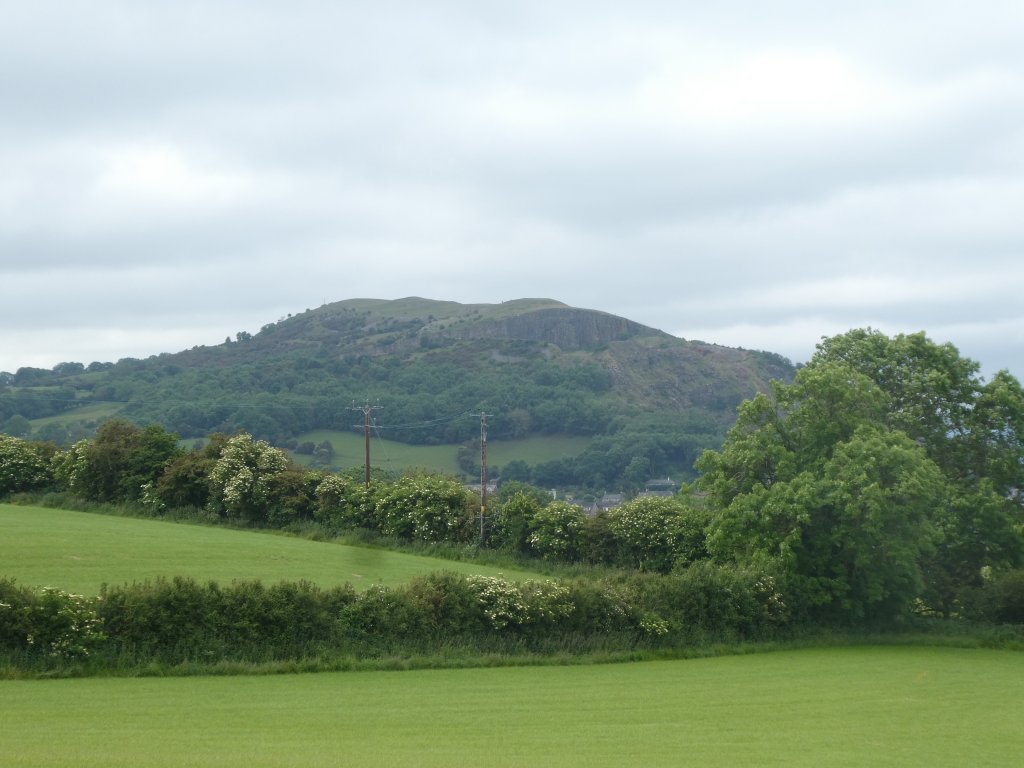 We kept to the Offa’s Dyke path until were were very close to the hill.  No path off the fields and onto the hillside appears on the map at this point (not even on the 1:25000 sheet) but there is one on the ground; part of it is marked as a permissive path rather than a public right-of-way. Once on the hill there is no obvious route to the summit, but it was not hard to pick a route between the patches of scree and gorse, using a mix of horizontal paths and grassy slopes. The summit is a grassy plateau with many wild flowers and patches of limestone showing through the thin soil. On a clear day there would be a splendid view across the Denbigh moors to Snowdonia; on the day we did the walk we could not see this far on account of haze and distant low clouds. The foreground is an aerial panorama of the coastal holiday resorts and the Vale of Clwyd — definitely worth the ascent. 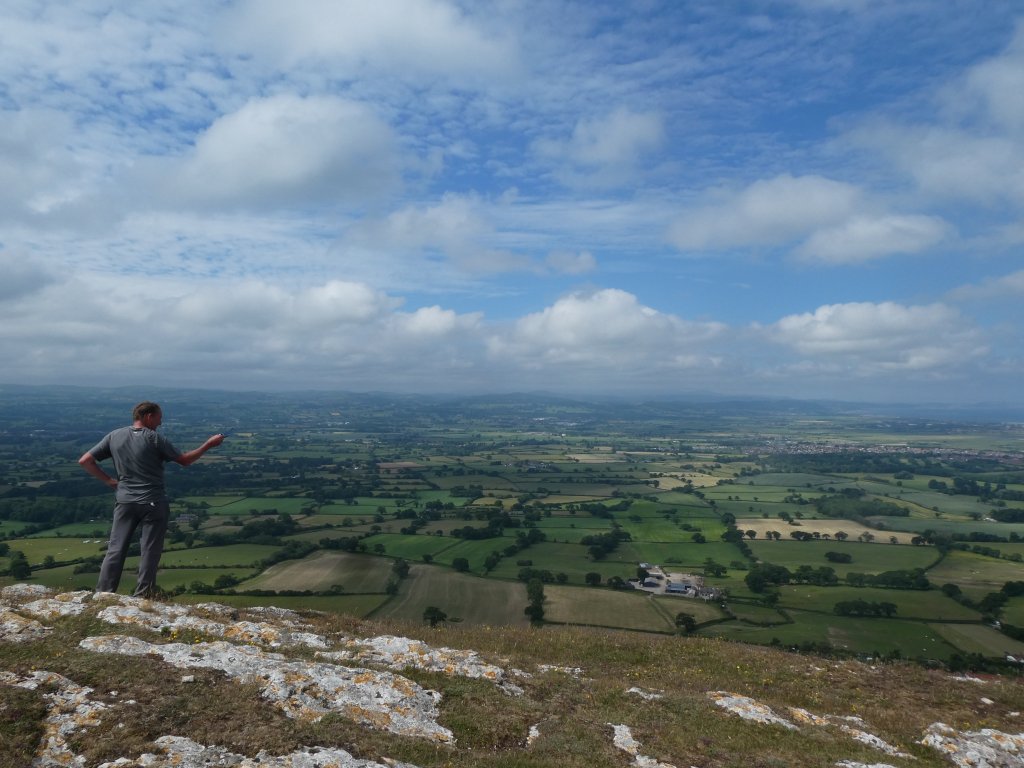 Before leaving the summit plateau we strolled northwards to look into the quarry. This is an impressively large hole in the ground which still looks freshly-made. A quick scan through the historical maps on Edina Digimap suggests that most of the stone was extracted between the 1960s and the 1980s. If you do the walk yourself, you might well want to look into the quarry, but I would suggest retracing your steps to the summit and leaving the hill by the route we used for the ascent. There may also be a good descent route at the very south end of the hill — we did not check. Having reached the stout fence along the edge of the quarry, we made the mistake of following it down the hillside. The descent was easy until we reached the bottom of the hill; where we found our way blocked by another fence, topped by ferocious-looking barbed wire.   Some commando wriggling was needed to get under the fence to join the public footpath into Dyserth. From there, we returned to Gwaenysgor via the Prestatyn-Dyserth way: a cyclepath that runs along the route of a disused railway.

A classic lump, or what is left of it / Hugh's Geophysical Blog by blogadmin is licensed under a Creative Commons Attribution CC BY 3.0