For this year’s holiday we booked a week in a comfy hotel in Gairloch, out on the distant northwest coast of Scotland. It really is distant, too: it takes as long to get there from Edinburgh as it does to get to North Wales. I was quite excited about the trip, partly because the area is geologically-important part of the country and one I had never visited. I asked my geological colleagues for suggestions as to where I might visit, but before I had done anything else much I discovered some geology on the beach by the hotel. 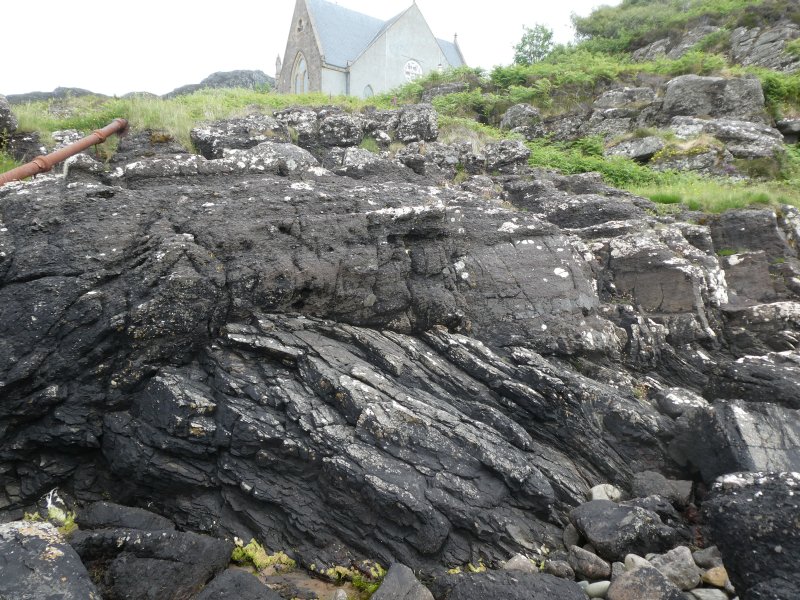 The photo shows a nice exposure of the unconformity between the Lewisian Gneiss (below) and the Torridonian sandstone (above). 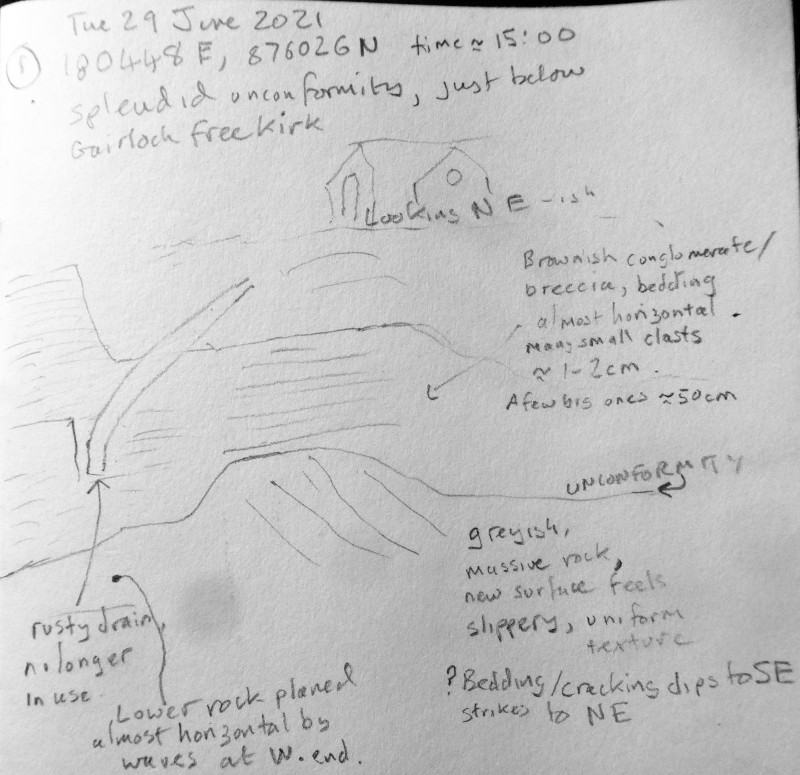 My sketch would not win any prizes, or indeed a mark much above a bare pass on a first-year geology course. But it hopefully gives a feel of what I was looking at. It seemed much more dramatic in real life than it does in the photo: the sea creates beautiful exposures but does tend to paint all rocks in the same colour scheme. The unconformity is in some ways reminiscent of Hutton’s unconformities on Arran and at Siccar Point. But both the Lewisian and Torridonian rocks are very much older than either of the rocks at Siccar Point.

Of the various locations to visit suggested by my geologist colleagues, the easiest to access from a base to the south was Knockan Crag, on the main road north of Ullapool. It is an important site because the crag is an exposure of the Moine Thrust. I was unreasonably excited to see the well-known Cambrian sequence of pipe rock, fucoid beds, Salterella grit and Durness limestone stacked up in order, with the Moine schists thrust on top of them. 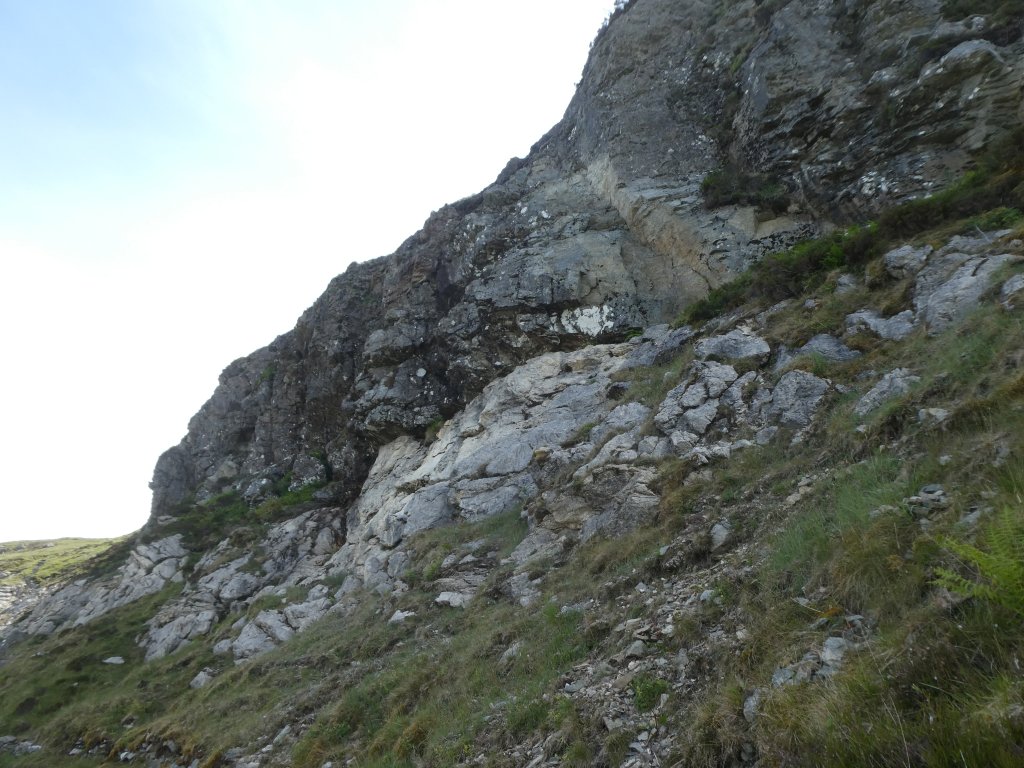 The photo above shows the Durness limestone (pale, below) with the Moine schists (dark, above). The thrust plane itself appears very sharp here, although the whole thrust zone is more complex than this suggests. 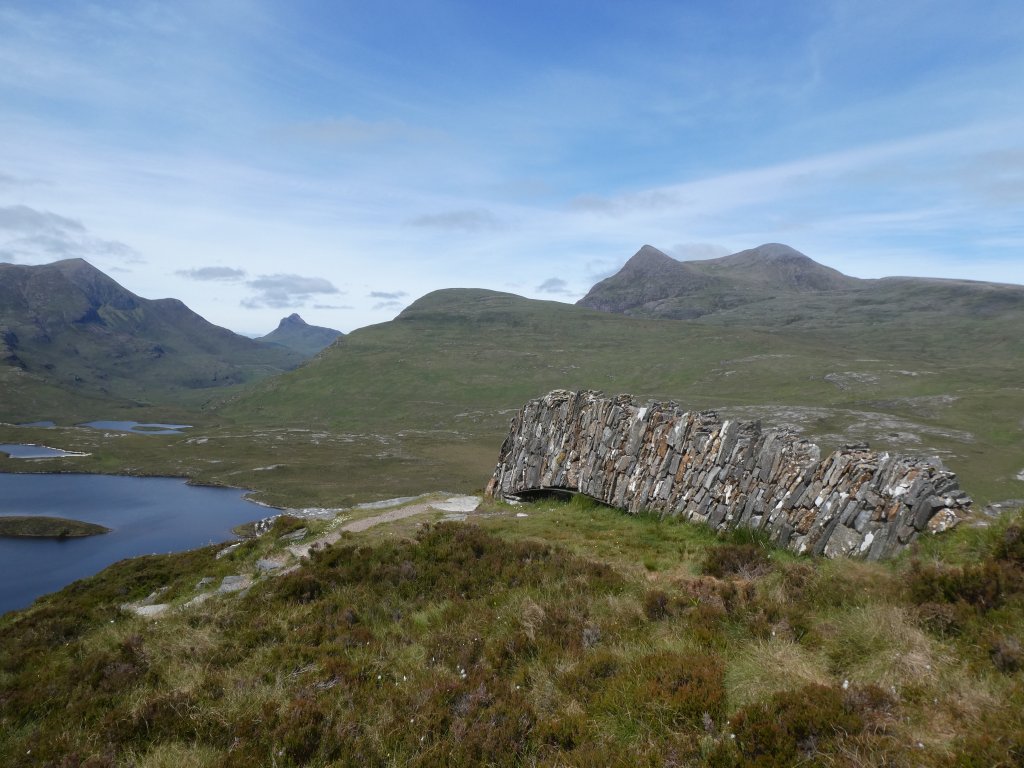 … and the site is enhanced by plenty of information boards and a variety of Earth science related sculptures. It is definitely worth a visit if you are passing.

It was noticeable that many of my fellow hotel guests were attempting to complete the North Coast 500 : a 500-mile loop starting and ending at Inverness. With a little extension to Skye you could convert this into a Moine Thrust 600(ish), visiting all the places where you can drive across the thrust zone: a geologically more interesting version of my drive along the Scottish border.

Geology tourism: the distant north west. / Hugh's Geophysical Blog by blogadmin is licensed under a Creative Commons Attribution CC BY 3.0