I escaped from my house for a week’s holiday. It felt rather odd, even though I was only in a cottage in the village of Butterstone, near Dunkeld. The village is just on the northwest side of the Highland Boundary Fault zone: the rocks to the south and east are Devonian sandstones similar to those in Dunbar, while those to the north are older, harder, metamorphic rocks like the ones at Ben A’an

The country to the north and west of the village contains a splendid array of classic lumps. I targeted a hill called Benachally for my first walk, but was turned back by a farmer who was moving a herd of very skittish cows across the intervening terrain. I therefore headed up the other side of a small valley with the vague intention of returning across a stretch of moorland and visiting one of its small summits. 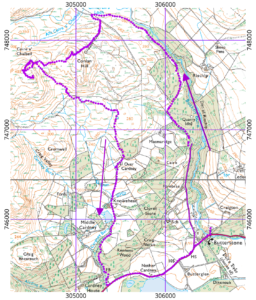 The road is a very pleasant walk, passing from broadleaf woods onto an upland of heather and scattered trees. Traffic is not zero, but it is light due to a sprinkling of “Private Road” signs. I stuck to the road as far as a point where the map showed a track turning off at a sharp angle through a locked, but climbable, gate. The track does not visit a summit, so after a short distance I turned right and headed uphill. The terrain here was thick heather, making for exhausting walking. There is not much exposure of the underlying bedrock, but there are boulders of it scattered about. You can see clearly how their original sedimentary layers have been warped in the process of metamorphosis. 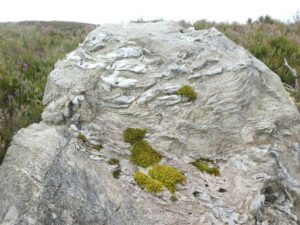 I eventually struggled to the summit labelled “Conlan Hill” on the OS maps. It was clear both from the map and the view that this was not the highest point in the vicinity, so I continued west for the next summit. That summit has no name on the OS maps. On the 1:50000 map it appears to be called Knock of Findowie, but the 1:25000 sheet makes it clear that this name belongs to a lower summit further to the west.

The terrain between my innominate summit and Conlan Hill is scattered with the paraphernalia of the raising and shooting of grouse. Fortunately, I did the walk before the start of the shooting season, so there was no chance of disrupting a shoot. The summit rises very steeply with no obvious path to it; the ascent was a hands, knees and feet battle with the rocks and heather. The view from the summit is worth the ascent. It is rather varied. To the north, it is dominated by the nearby Deuchary Hill (which looks like a far more splendid classic lump), but there are glimpses of the bigger hills beyond. To the south is a splendid panorama across the Central Belt, with its Devonian and Carboniferous bedrock. It is curious for someone who has lived in Edinburgh for many years to see the two peaks of the Lomond Hills from the north. It was a very clear day, and I had a glimpse of the land on the south side of the Firth of Forth, some 70 km distant. 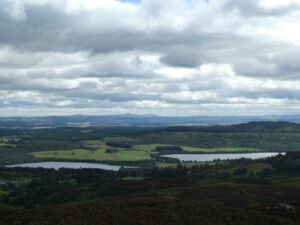 To the east, the view is dominated by Benachally: the hill I had not climbed in order not to disrupt the movement of cows.

The view to the south is best seen not from the summit, but from a cairn on the southern edge of the summit area. To reach this, I had to skirt round a small cliff. The summit area had more gamekeeping gear, and a track leading to it, but it seemed to go in the wrong direction, so I left the summit by heading eastwards through the heather, aiming for a well-used track that headed southwards. This track lead me to a larger one that is actually marked on the map; I was able to follow this all the way down the slope to the A923 and thence back to Butterstone.

Conlan Hill (and its neighbour) / Hugh's Geophysical Blog by blogadmin is licensed under a Creative Commons Attribution CC BY 3.0