It is nice that lockdown is easing and that we can now go for walks further afield; I am looking forward to doing that next week.

There are not that many more hills which are easily accessible from Dunbar by bike; I recently cycled up one which is a bit more of a push than Doon Hill and Brunt Hill.  I was glad I had taken some snacks and water with me. 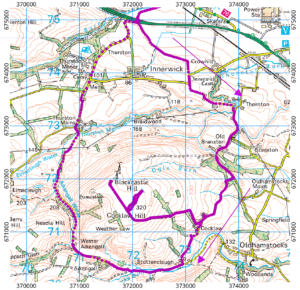 The hill itself has a bit of an identity crisis: the OS map labels it both “Cocklaw Hill” and “Blackcastle Hill. It is easily seen from a wide area east of Dunbar, and easily identified by its two large radio masts.

I accessed the hill via the same crossing-point of the A1 as when I visited Brunt Hill, turning left shortly after the crossing. The road climbs hard, especially after the right turn at Thornton bridge. I was not sure whether the track up the hill from Cocklaw Farm would be cycleable as it has no colour on the OS map. But it turned out to have been properly tarmac-ed, probably when the radio masts were built. Maintenance has been no more than occasional in subsequent years; the roadside markers have a very 1950s air. 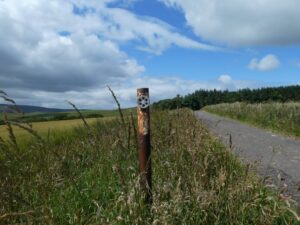 The climb to the summit tested my aged legs and worn-out sprockets to the limit; I was reduced to walking at several points. When it is finally reached, the summit area turns out to be a wide grassy plateau, grazed by numerous sheep. The road crosses the plateau to the far side, from where the view is spectacular. The greater height, 320m compared to Doon Hill’s 177m,  is very noticeable. 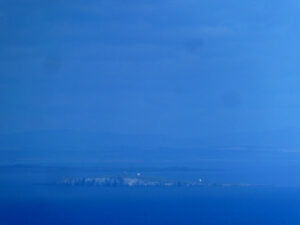 In this very telephoto, very contrast-stretched shot, you can see Fife Ness over the top of the Isle of May, not hidden behind it as it is from Dunbar. Beyond that are the Tay estuary, Angus, and perhaps the distant Cairngorms, barely visible through the haze.

There is a trig point on the hill, but is not visible from the road. If you are a trig point completist, the way to find it is to dump your bike near the last cattle grid you crossed as you arrived  at the summit plateau. If you then walk trustingly northeastwards, the trig point eventually appears. 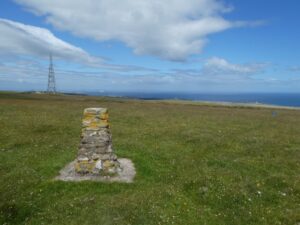 On this larger-scale map you can see exactly how lacking the summit area is in landmarks by my erratic route to the trig point and back. 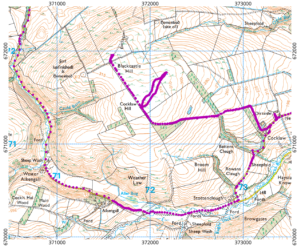 My plan was to ride a loop round the hill as well as ascending it. Although a tarmac road goes right to the summit, the circular route includes a little bit of off-roading. I descended the summit road at great speed, propelled by gravity all the way back to Cocklaw farm. From there, I followed the tarmac as far as Stottencleugh, turning off onto a good gravel track. The track becomes less and less made up, eventually I found myself riding across a grassy surface. The grass was fine: the grim bit is the steep and unstable track of gravel and stones leading up to Aikengall, where I found myself back on tarmac. From here it was a straightforward ride back to the A1 crossing point and from there to Dunbar.

Leaving out the stroll to the trig point, the route turns out to be 33 km long. It took me four hours at a very leisurely average of 8.3 km/h; maybe that isn’t too slow, given the ascent and the time spent at the summit.

Another cycleable classic lump / Hugh's Geophysical Blog by blogadmin is licensed under a Creative Commons Attribution CC BY 3.0