There is a tradition in some circles of writing up the ascent of “classic lumps”, that is, hills which are far too small for the ascent to be considered much of an achievement. My classic lump from this year’s summer holiday is Tenerife’s Monaña Chayofita, one of the many basaltic scoria cones that dot the Canarian landscape. 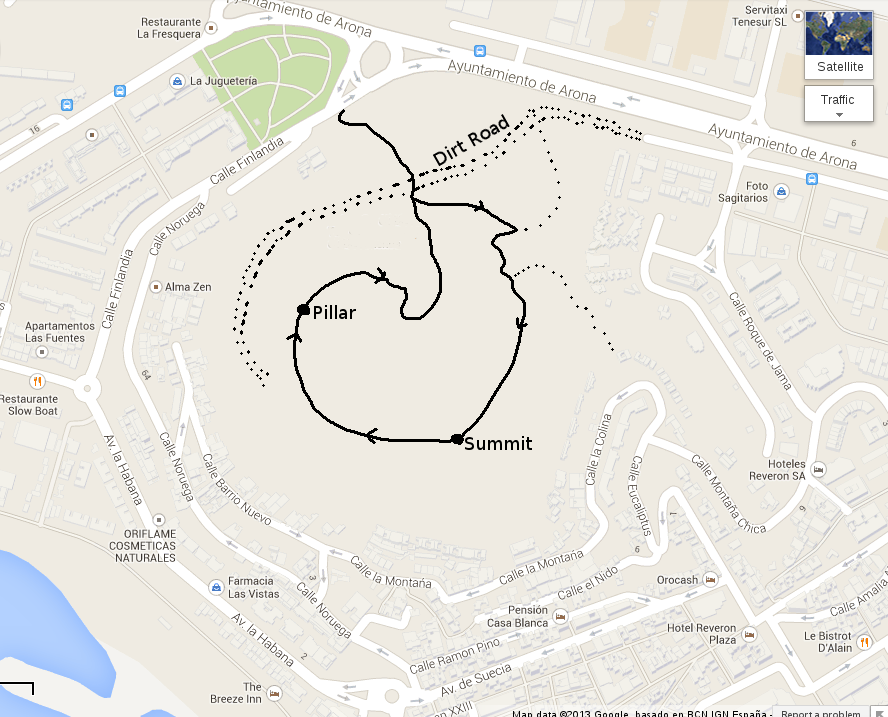 If there is anything noteworthy about the hill it isn’t the altitude (114m), but the fact that it is right in the middle of the sprawling resort towns of Los Christianos and Playa de Las Americas. Just as Edinburgh has Arthur’s Seat as its volcanic classic lump, so Los Christianos has Montaña Chayofita.

The hill is clearly visible from the beach at Los Christianos, but is the slopes on that side are steep, crumbly, and ringed with buildings whose back gardens extend up the hill. Access is on the landward (north) side.

I approached the mountain from the uphill end of the Calle Finlandia, crossing first a patch of land on which trees have been recently planted, and then a dirt road which curves for some distance round the west side of the hill. If you approached the hill from the west, you could use the first part of the dirt road, turning off it where the path I used crosses it. There is little point following the dirt road further than this; it only leads to a house and there are no paths leading off it towards the summit. There may be other access points on the eastern side.

The form of the hill is seen clearly as you approach; it has several typical characteristics  of a Canarian scoria cone. First, it has the typical ring shape with a breach in the side of the crater. The path approaches the hill via the breach and forms a circular walk around the rim of the crater. Secondly, the Canarians have at some point regarded the hill as a convenient source of easily-mined gravel. There are many cones in the islands that have been partly or entirely removed for this reason.  Monaña Chayofita has been slightly nibbled at in the region of the breach, but most of it is still there.

The quarry workings allow you to see that the inside of the hill is made of a black gravel or rubble of basalt chips, but that the surface layers have weathered to a paler colour. I don’t know how old the hill is, but it looks a lot less fresh than the cones from the 1736 eruptions in Lanzarote. 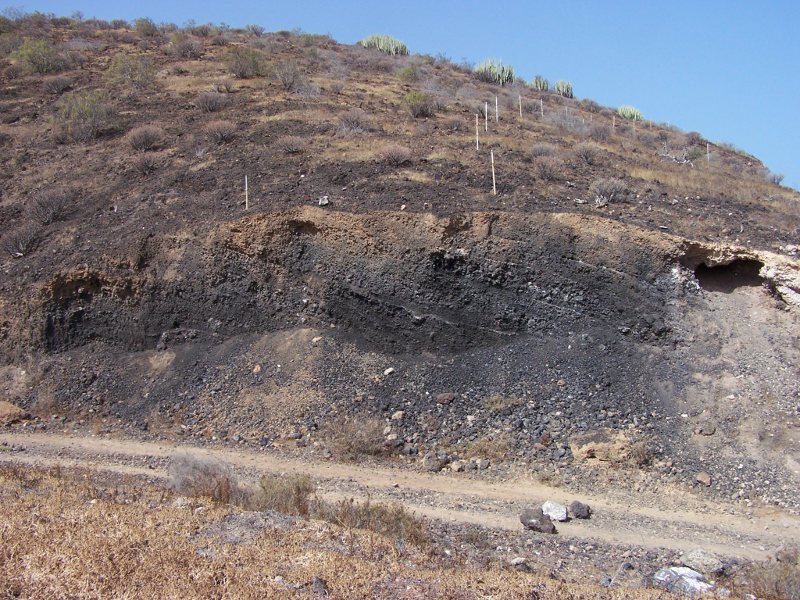 I did the walk in a clockwise direction, heading first for the main summit on the west side of the crater. The path winds along the crater rim and it doesn’t take long at all to reach the summit. This features the usual cairn, but also a battered wicker chair so that you can sit and look at the view. If you are sufficiently brave or foolhardy, that is: the chair doesn’t really look as if it would support even my rather minimal weight. 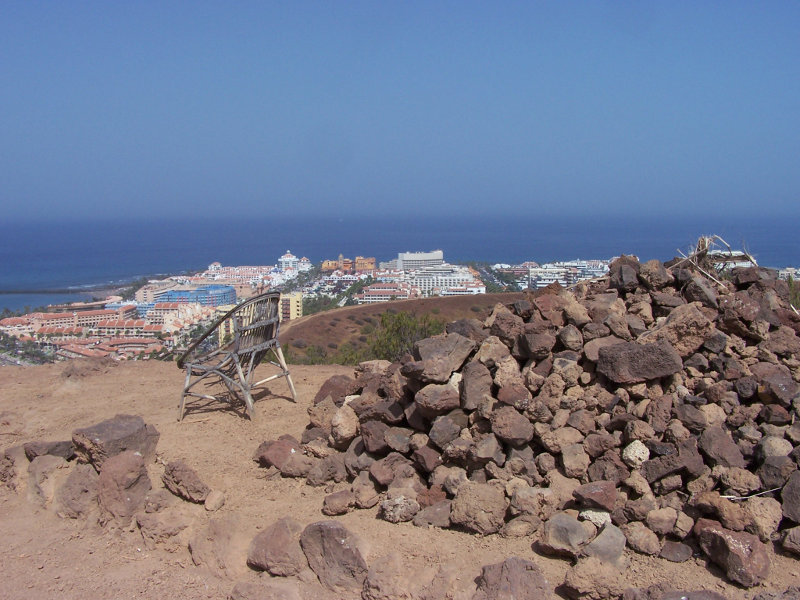 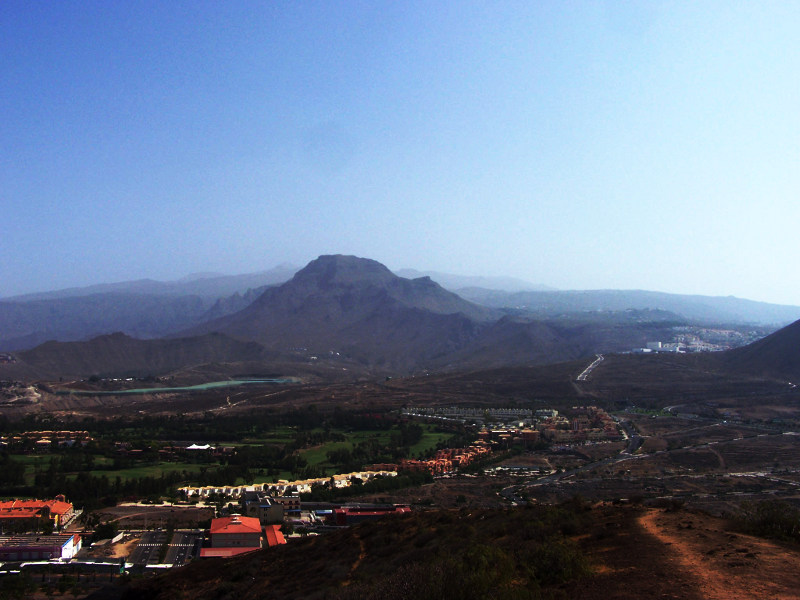 The view is pretty good for such a small hill. There is a nice panorama of Las Americas and Los Christianos. Inland, the view is dominated by the flat-topped Roque del Conde, with the summit of Pico del Teide just to its left. On a clear day you can probably see out to the neighbouring islands of La Gomera and La Palma, but I did the walk on a day when the air was very hazy. Such haze (warning: here comes the meteorology bit) is a common feature in the Canaries when the wind comes from a more easterly direction than usual, bringing dust from the Sahara with it.

The walk continues along the rim of the crater, descending gently and ascending only slightly to the subsidiary western summit. This, too, has a cairn and also a white concrete post which may well be a trig point; it resembles the standard Spanish trig column but doesn’t look as well made or maintained as they usually are. If it is a trig point it is far from clear why they chose not to put it on the main summit. The path again continues along the crater rim but towards its end it descends steeply into the crater. At this point I spotted one of the very few other people I encountered on the walk. Most were other walkers, but this man and his dog appear to live in a cave in the centre of the crater. 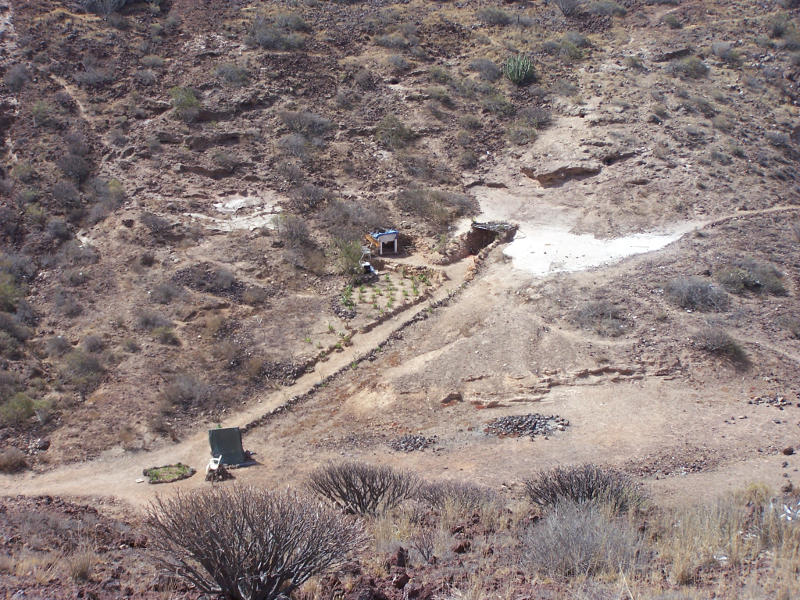 He has planted a couple of patches of garden and the path goes past the lower one before joining up with itself. From that point I left the hill by the same route that I arrived, having worked out that the dirt road didn’t lead anywhere.

So that’s it: as classic lumps go it’s a good one: a lot of return for not a lot of effort, and a nice change from sitting on the beach.

Montaña Chayofita: A “classic lump” in the Canaries / Hugh's Geophysical Blog by blogadmin is licensed under a Creative Commons Attribution CC BY 3.0

8 Replies to “Montaña Chayofita: A “classic lump” in the Canaries”