Every year, at some point during the spring, there is the magic moment.

Now, I always grow my tomato plants from seed, planting them in a heated propagator in my study, usually in early February.    Before the magic moment, the plants in my study are growing away happily, and any that I am unwise enough to put out in the greenhouse sit and sulk because it is cold, or, worse, die off because there was a frost. Once the moment has passed, the plants in the greenhouse grow away like mad, and any I have left in the study become long, leggy and pale.  The problem, of course, is that it is hard to identify exactly when the moment was, until after it has passed.

I usually deal with this problem by planting a surplus of plants and moving them to the greenhouse in stages. That way, if it turns out that I put some plants out too early, I have backups. 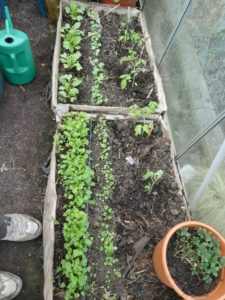 This year, I guessed that last weekend was the magic moment. The photo shows four of my plants, newly planted out in the compost I was busy shovelling a few weeks previously. A week later, they all still look OK, but are not clearly ahead of the ones that I moved into bigger pots and put back in the study. The nearest plant looks a bit soggy in the photo; it came out of a very tiny pot and didn’t like the planting-out process much. But it perked up an hour or two after being watered. Down at the far end is a plant that I put out a week or two earlier. While it has not been frosted to death, it has definitely sat and sulked, and is a good bit behind its fellows.

The space nearest the camera (under that pot of mint, which will go outside soon) is retained for one of my two “sungold” plants. I only had two seeds left, and want to ensure I have at least one plant. So the other plant is one of the backup set being nursed in my study, and will go out at a later date. (I have discussed choice of tomato varieties before and noted that sungold seeds are expensive as they are an F1 variety.)

The magic moment / Hugh's Geophysical Blog by blogadmin is licensed under a Creative Commons Attribution CC BY 3.0