I don’t have a lot of choice as to where to go for the exercise permitted to me by the government. The obvious choice is to go east along Dunbar beach (see previous post). But by sneaking through a few streets and past the swimming pool I can go west along the beach instead. I was aiming for a brisk short exercise, not a half-day geological excursion. Also, the sun only came out at the end-point of the walk, so I only took a few photographs. 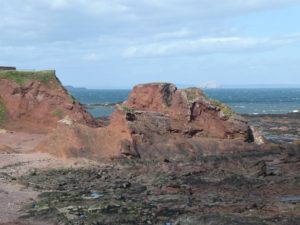 The orangy-brown cliffs in this photograph are volcanic ash or tuff from a volcano that erupted at some point during the Carboniferous period. (These rocks are the big round orange blob on the left-hand side of the geological map at the bottom of this earlier post; the photo shows their eastern edge.) Apart from their red colour (which is the result of chemical reactions occuring after the eruption) they look similar to a section through a far more recent volcano. The tuffs in the photo have fallen back into the mouth of the volcano; the resulting structure is called a “neck”. This particular one is called the Parade Neck in geology books, on account of the promenade that runs along the top of the cliffs. The darker rocks in the foreground are sedimentary rocks of the Stratheden/Inverclyde groups. The whitish island visible in the far distance is the Bass Rock: a plug of lava from the core of another early-Carboniferous volcano. It is white because it is the home of a large colony of gannets.

I’m not going to say a whole lot about this stretch of coast because it is described in detail in a book called “Lothian Geology: An Excursion Guide” by A. D. McAdam and E. N. K. Clarkson. I have a well-thumbed paper copy of this, but it turns out that the Edinburgh Geological Society have put the entire contents on line for your browsing pleasure.

Inside a local volcano / Hugh's Geophysical Blog by blogadmin is licensed under a Creative Commons Attribution CC BY 3.0