Like everyone else, I am stuck in my house on account of the COVID-19 outbreak, only going out for essentials and my one allowed walk per day. Fortunately, I have easy access to the beach, where I can get in a long walk without meeting too many people. It is actually an easier walk than usual because the golf course is closed, so you can walk along the edge of the course without worrying about being shouted at by golfers or hit by a stray ball. There is a lot of geology to see, too. The start of the walk is on the Devonian old red sandstones of the Stratheden group. Layers and layers and layers of it, including the fossilised ripple marks I wrote about in an earlier post. This merges into the Ballagan formation of the lower Carboniferous; I have to admit that I didn’t notice the difference. Considerably more obvious is a dyke (?or sill) made of some sort of igneous rock. It is quite tricky to get a photo of the intrusion that shows it up clearly; I did my best. 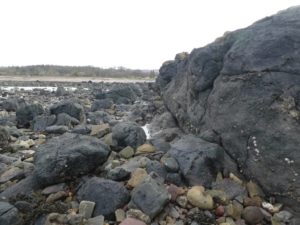 The rock is very dark, and, if you can find a clean surface, you can see the gas bubbles in it from when it was intruded. 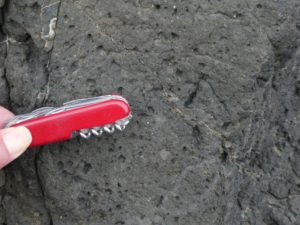 The geological map labels it “Midland Valley Carboniferous To Early Permian Alkaline Basic Sill Suite”. (I included a geological map in this earlier post; this intrusion is marked “?? rocks h and i” near the right-hand side of the map.) The intrusion marks the boundary between the Devonian and early Carboniferous sandstones, and the lower Limestone group, which is from later in the Carboniferous period; there is a time gap between the Ballagan and lower limestone formations  of about 15 million years. As I noted in this much earlier post, the lower limestone group rocks are not pure limestone; they are mostly beige-coloured sandstones with a few bands of limestone. Unlike the Stratheden group and Ballagan formation, they have quite a few fossils in which are spottable by the casual amateur. 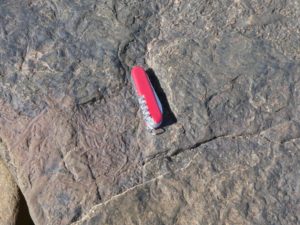 I don’t know exactly what these wiggly things are, but I suspect they are bioturbation caused by some sort of marine worm. A little further along, the rocks are full of crinoids: 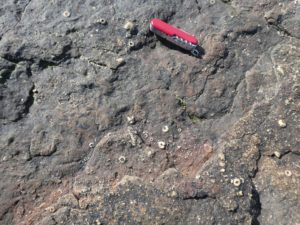 In this earlier post I noted some crinoids I had found in a wall; I suspect that those crinoids came from somewhere in the lower limestone formation. The distinction between the limestone bands and the surrounding sandstones is quite dramatic in places. 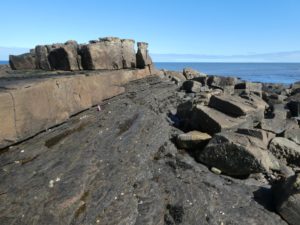 What I think I am seeing here is the dark grey limestone made of many thin layers, overlain by massive beige sandstone. But it is quite hard to tell from the geological map as the map is flat, and the beach at this point is very three-dimensional.