A bank of celandines (Ficaria Verna) is a sure sign of spring, and I was cheered to see this large patch of them during my Boris/Nicola-permitted walk a few days ago. 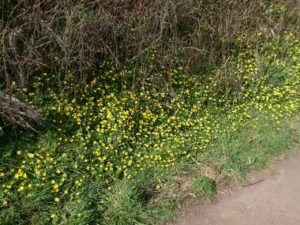 Celandines are not just a plant of the countryside, I find lots of them in the garden as well, where they are in some respects a really annoying weed. They are not annoying for the whole year because they become dormant by May along with the spring bulbs, but in March and April I spend a good while grumbling about them.

The reason that celandines are such a nuisance is that they grow from things that look like tiny potatoes. 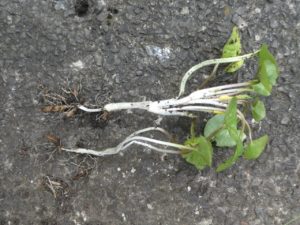 These things are actually tubers, as potatoes are. And because they are small and brown, it is easy to distribute them around the garden during the summer, while they are dormant. Furthermore, it is very difficult to get all of the tubers out of the soil while weeding: you may actually end up spreading the plant around instead of eliminating it. The tubers are also the reason why you have to avoid putting the plant onto the compost heap: rather than rotting down, it survives a trip through the heap quite happily, emerging all ready to invade whatever part of your garden was going to get the compost. Any celandines that come out of the soil have to go into the garden waste bin, along with weed bulbs such as bluebells, grape hyacinths, and crocosmia. (Oddly, nuisance weeds with tap roots, such as dandelions, red valerian, and columbines seem to compost down without trouble.)

Celandines / Hugh's Geophysical Blog by blogadmin is licensed under a Creative Commons Attribution CC BY 3.0