This is yet another holiday post, about a thing I was reminded of while flicking through my holiday photographs.

I am as fond as the next overgrown schoolboy of vintage machines of any sort; I can stand and look at a steam locomotive, traction engine, windmill or vintage car for ages, especially if it is running. So no-one was surprised when I headed out, in defiance of a poor weather forecast, to visit the local vintage rally. There were plenty of steam rollers and traction engines, and more old tractors than you can possibly imagine. I was a little alarmed to find that the display of old cars included a 1972 Hillman Avenger — the model that I learned to drive in. I felt that I was rapidly becoming a vintage exhibit myself.

Tucked away in a corner of the site were a variety of ancient stationary engines, made redundant long ago by electricity, and lovingly restored. And in among the coughing petrol and diesel units and hissing steam engines was this curious machine, spinning silently away to itself. 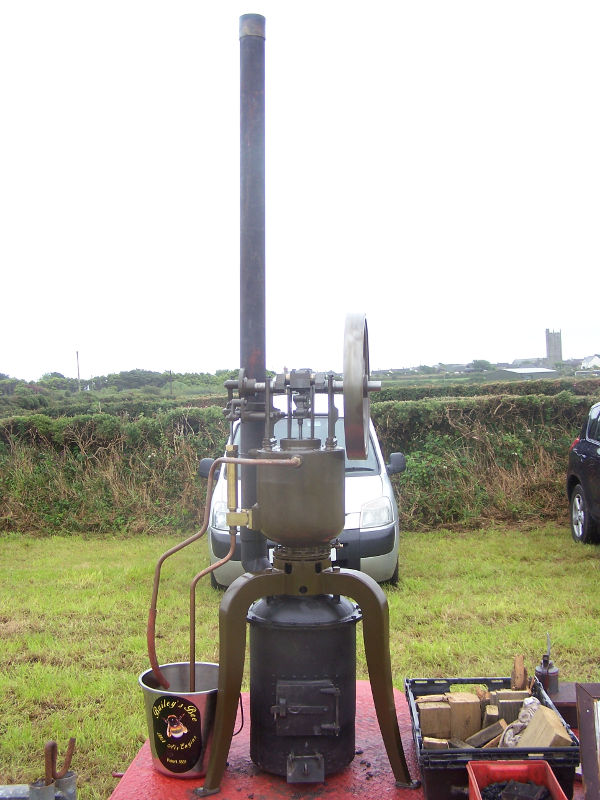 It is clearly powered by a coal fire in the little firebox at the bottom. And it is clearly not a steam engine; there is no boiler, no condenser, no chuffing steam exhaust. The sign on its cooling-water bucket declared it to be a “Bailey’s Bee” hot air engine; I guessed that it was a Stirling-cycle engine of some sort. This left me intrigued enough to go and look it up at a later date on the internet, and was a nagging reminder that I really didn’t understand how a Stirling engine works. And that was annoying, given that I can hardly remember a time when I didn’t understand at least the basic principle of the steam engine and the internal combustion engine.

A bit of googling revealed that “Bailey’s Bee” was built by W. H. Bailey of Salford, probably in the late 19th century, and that it is indeed a Stirling engine. The Wikipedia page for Stirling engines makes it clear that the Bee is a beta-type (single cylinder) Stirling engine and shows a helpful little animation of how such an engine works. Presumably the hot end of the cylinder protrudes into the firebox and the cool end is surrounded by the water jacket. I wish I had taken a video of it running, so that I could see how the linkage connects the flywheel to the two different pistons.

Despite Wikipedia’s animated figure, I still find the details of how the engine works rather puzzling and magical. It isn’t magic in the glaring sense of defying the laws of physics: seen from a distance it is a heat engine like any other. You put heat energy in at a high temperature, take it out at a low temperature, and some of the energy is converted to mechanical work. It is obeying the first and second laws of thermodynamics, as it jolly well should. But the exact process by which the heat flow produces motion still leaves me scratching my head and saying “yes, but …”.

Fortunately, the University Library has electronic access to a book on Stirling engines and other hot air engines, covering their history, theory of operation and possible future uses. Next time I have insomnia I might read it, and see whether I become enlightened. I must also make a pilgrimage to the National Museum of Scotland, where they have just put on display an original Stirling engine built by the Rev. Stirling himself. This engine is what the Wikipedia page describes as an Alpha type engine; the hot and cold ends are two different cylinders, connected by a pipe with a heat exchanger/heat store in it.

Runs by magic? / Hugh's Geophysical Blog by blogadmin is licensed under a Creative Commons Attribution CC BY 3.0