This post is by Tomas Sanders who is the current Open Content Curator intern in EDE. When not an intern, Tomas is a History student at the University of Edinburgh, as well as a walking tour guide (sadly he’s not one of the ones that get to wear a cloak).

“I want to be inspired. A lesson plan is not inspiring.” 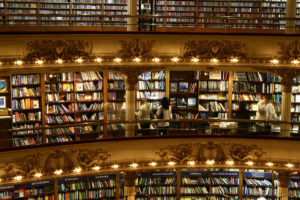 I had quite a few conversations to research this blog. A lot of them with friends about their school experiences, a couple were lengthy discussions with teachers. I won’t itemise everyone I chatted to, formally and informally, about this, but basically there was quite a lot. However, in all of that discussion, this was the sentence that stuck out at me. The man who said it was a member of the Senior Management Team at a private school, so by no means representative of the teaching profession in general, but, nevertheless, someone with a long experience of teaching and schools.

It was a statement that cut to the heart of a rather tricky question: what are we actually trying to do with Open Educational Resources?

Are we trying to replace traditional resources like textbooks so as to increase the accessibility of education? Are we trying to free up teachers from the creation of resources so they are less overloaded? Or are we trying to inspire people – give a lesson an additional sparkle rather than replace the whole thing? (For the sake of a neatly rhyming title, I’m describing these respectively as aiming for (more) education, for (reduced) perspiration or for inspiration.)

Implicit in these questions are other, even broader ones. Do we have a social agenda? If so what is it? Are we trying to help close the education gap? Or improve education in general?

These are not purely cerebral questions, whose answers will not impact working practice.

Open educational resources may be free, but that does not mean there is no cost in using them. It takes time and work to find OERs and to be able to use them.  There also can be barriers in terms of the technology to access OERs. I had a lengthy conversation with a newly qualified teacher who had just finished placements in three different state schools and we talked a lot about the resources of the schools he had experienced. In the private school and in two of the three state schools each pupil had some form of portable device, either an iPad or Chromebook. This seems to indicate that the resource infrastructure gap, at least as it relates to OERs, may not be as massive as might be assumed. It does not seem unreasonable to assume that soon the vast majority of Scottish high school pupils will have some form of tablet or laptop with them in school. These could then be used to access OERs – equally available to all.

But it will probably not be as utopian as that.

The recently qualified teacher found that iPads and Chromebooks were being used mainly just as a way to access the internet for research purposes, with little integration of apps or more innovative use of technology. In contrast, the private school teacher said that each subject had about 4 or 5 different apps that they would semi-regularly use.

It is an important reminder that the amount of support schools are able to give their teachers in the introduction of new technology will greatly impact how effectively that technology is used. As a part of that new technology, it is possible that OERs will be most easily and effectively used by those schools which already have the most resources. They have the time to work out their strategy and research possibilities. Counterintuitively, a free resource could actually broaden the educational divide rather than shrink it.

This may be painting too dark a picture. After all, there is more incentive for less well-resourced schools to seek out free resources, even if they may find it harder to do so, and schools do not operate in a vacuum – teachers will share useful resources and aim to spread best practice. However, sitting back and hoping for the spread of resources seems like an ineffective strategy.

One possible way to answer the question of what we should be aiming to do with our OERs is to ask teachers what they need. In my conversations I was given quite a lengthy shopping list of possibilities. I won’t reproduce everything that was mentioned, but there was two general themes. One was that we should serve areas of the curriculum that are currently under served, (which is definitely something that we try to do already). The second was that we should take the best, most interesting things that the university has to offer – amazing things to grab students’ attention and make them look at things in new ways. Again this is something we already try to do, although perhaps we could give more examples of how they could be integrated into a lesson. These are both things that would be valuable to teachers, but how do we try to ensure that if we make them they will be used widely, especially in the schools that could benefit from them the most?

Putting our resources in as many places as possible is one approach. This summer we’ve been putting up some of our resources on more platforms like OER commons and the National Science Digital Library. While it’s hard to tell over summer, they don’t seem to promise a massive increase in usage. It’s too easy for resources to get lost amongst the mass, or for teachers to simply not know what’s out there. Possibly more important than developing our digital spaces is developing our human connections.

I’m not sure we’re talking to teachers enough. Neither teacher I talked to was massively acquainted with OERs, although both were familiar with the concept. The newly qualified teacher had just done a Geoscience degree and a trained as a Geography teacher, both at Edinburgh, and yet was unaware of the OERs produced by the School of Geoscience. That seems to indicate there is some work to do in getting our message out. We have a large captive market of student teachers at the university who would find our OERs useful. Are we doing enough to educate them about OERs? What about connections to other teacher-linked organisations like the Scottish Association of Geography Teachers, who have over 500 members across Scotland? If we can insert our resources into these kinds of networks, rather than waiting for them to be found, it surely must greatly speed up the process of them being passed around the educational community.

If we can take actions to spread the use of OERs, both ours and others, we can hope to unlock the potential of a better quality education system, with more time for teachers and that’s less socially divided. Now that really would be something inspiring.

Inspiration. Perspiration. Education? / Educational Design and Engagement by EDE is licensed under a Creative Commons Attribution CC BY 3.0

Celebrating the first year of CMALT