Tomas Sanders is the current Open Content Curator intern in EDE. When not an intern, Tomas is a History student at the University of Edinburgh, as well as a walking tour guide (sadly he’s not one of the ones that get to wear a cloak).

***Standard warning that the views expressed are my own and do not necessarily represent the University of Edinburgh, even, and perhaps especially, in relation to extended critical analyses of promotional posters. ***

There’s a rather curious poster only a metre or so away from my desk.  It has a large title – ‘Open Educational Resources’ – and at the bottom a quote from The Cape Town Open Education Declaration:

“We are on the cusp of a global revolution in teaching and learning. Educators worldwide are developing a vast pool of educational resources on the Internet, open and free for all to use.”

In between is the image I find so interesting: it’s drawing of a man playing chess. Not, however, just any man, but rather the famous ‘Mechanical Turk’.

The ‘Mechanical Turk’ was an automaton built in the 1770s that could play chess and toured Europe and America defeating many famous human rivals including Napoleon Bonaparte and Benjamin Franklin.  The world was flabbergasted that a mere machine could defeat humans at such a complicated task.  The explanation for this though was rather simple – it couldn’t.  Rather than being a pure machine, an operator would be cleverly hidden in the table beneath the chess board controlling the Turk’s movements from there.

That the image of such a famous fraud should be used to promote Edinburgh’s Open Educational Resources seemed a tad odd to me.  What was the message we were trying to send?  The Mechanical Turk was never particularly open – either to society as a whole, as it mainly was used to entertain elites, or in it the way it worked, based entirely on trickery.

Nor could it really be considered an educational resource, except I suppose in teaching a little humility to the great and good it defeated.  I came to the conclusion that it had probably been chosen for the way it looked rather than its historical context. The Turk is sat at his table, chess board in front of him, arm stretched out, almost inviting us to join him at his game.

I decided that that was all that was meant to be implied by it: intellectual pursuits (symbolised by chess) are open to you and to all, come and join.  It felt slightly unsatisfying to have to ignore the historical context, but I decided it was probably best to let it slide.

After all, I was not being employed to just stare at a poster, but to actually deal with the subject mentioned on that poster – OERs. OER was the first of many unfamiliar acronyms that I encountered in this job.

(When my friends ask me what I’m doing I take great delight in saying “I’m the OCC intern working with OERs in the EDE team within the LTWS division of IS.”  Unfortunately, they don’t think it’s as funny as I do and demand I use proper words.)

I had no idea what an OER was before applying for this job, and when I talk to my friends about it neither do they.

I guess that’s not really a surprise.  Although OERs have been growing in prominence in recent years, especially with institutions like UNESCO becoming increasingly involved, they have, it seems to me, made little visible impact on the average student experience, either at school or university.

There are four barriers I can think of to widespread use of OERs in the classroom.  The first and most obvious is simply don’t cover everything yet.  OERs are growing in number all the time though – and I’ll be contributing my own small way over this summer, by sharing new University of Edinburgh OERs (especially Geoscience and Psychology outreach materials) specifically for use in schools.

The second is that OERs can be hard to find.  Finding the right OER for what you’re teaching may require looking through several different databases, with no guarantee of success.  Again, this summer I’ll be putting up our resources on more platforms so hopefully it will be easier for teachers to find them.

Thirdly, they may require technology to use.  OERs claim to have no barrier in terms of price but may require technology of a certain standard in order to use.  There are some beautiful 3D rotatable images on Edinburgh’s Sketchfab of different animal skeletons and bones, but to allow students to fully explore them it would require each to have their own tablet or laptop.  Happily, most of our OER for schools are as accessible as they could be, with things like presentations only requiring a projector. Something most classrooms, at least in this country, are now equipped with. Or the OER might be a lesson plan of which only the teacher needs a copy.

The fourth and final barrier is perhaps the most serious and that is an actual or perceived lack of need. There are textbooks and other paid resources which are able to spend far more on promotion, but teachers are also adapting their old resources for the new situations.  OERs can be great and there are a lot of them but often they can be disjointed and vary in structure and style.

I was doing a course on Lynda.com yesterday about focused work which had an interesting rule for efficient practice.  It suggested that we should only make an upgrade or a change, such as buying a new phone or updating to new software, if we thought we would make back the investment of both time and money in less than a month and that it would continue to give a benefit for at least a year.  For teachers who already have content to cover their course they must ask themselves whether it is an efficient use of their time to go and find OERs which may be free, but take time to find and then incorporate into their teaching.

There are clear benefits of OERs which should give them the advantage, ultimately if not immediately.

To start with, they are free.  Teachers may not overhaul their entire curriculum every year, but over time we can expect OER usage to spread quite naturally as a useful resource that has a low cost barrier.  This may be aided by the increasing integration of technology in schools.  There are schools already in Scotland where the pupils all have tablets or laptops in lessons and that can only really be expected to grow over the next few years.  When that happens it would seem natural that teachers look for new content to make best use of these resources.  OERs, as an online resource, fit that need neatly.

OERs are, or at least should be, superior to traditional resources.

Because of the way they are licensed many can be remixed and improved upon – mistakes can be corrected, they can easily be updated to fit changing information or requirements, helpful additions or clearer explanations can be added.  This is all far better than a traditional textbook which, if it has a mistake or needs to be updated must be entirely republished and repurchased.  In collaboration, the best possible and most up to date resources can be created and freely shared.  Unfortunately, most platforms do not encourage this as yet, displaying static individual files rather than having multiple versions remixes and updates all available in the same place. 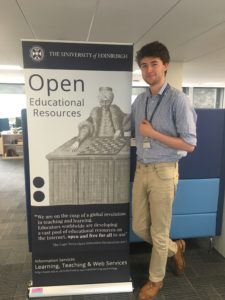 Tomas with the OER Banner featuring the Mechanical Turk

However, if OERs do ultimately become the cheapest and highest quality option, then surely we must be eventually looking at an OER curriculum, where almost all resources used in schools are freely shared.  We may be a long way from it as yet, but I’d wager we are significantly closer to it than the Mechanical Turk was to actual machines who could beat humans at chess.

Thinking about this I remembered a video I watched several years ago about digital education by YouTuber CGP Grey called ‘Digital Aristotle: Thoughts on the Future of Education’.  His basic argument is that eventually everyone will learn individually from open content online, funnelled through a computer programme, so that each pupil will be taught at the right pace with the content and techniques that work best for them.  Grey, an ex-teacher himself it should be said, sees a fundamental problem with teachers in that they can only teach a class at one pace, leaving behind kids struggling with material and boring children who already have a firm grasp on it.  I have massive problems with that as an assumption, mainly because it presumes that teaching just takes place in a lecture format and ignores all the other things that happen in classes, as well as other effective strategies for teaching such as peer to peer learning.

Re-watching the video though made me think about why I value human teachers.  I think there is something extremely valuable in a human you can interact with, who you can ask questions of and who can react to you as a person, not just a series of metrics.  I work as a tour guide when I’m not interning. The only reason I can do that is because people value real human interaction.  There are many apps, books, audio guides and pamphlets that visitors to Edinburgh could use to guide themselves about the city – and I’m sure some people do just that.  They may find that cheaper, they may find more information that is specifically relevant to them, they may even find it more accurate than some poor student still yawning from getting out of bed before noon.  Nevertheless, I find myself still employed.

Grey is wrong. Our Open Education Resources will remain just that – resources for teachers, not replacements for them.

And so I return to the image of the Mechanical Turk.  I may be reading too much into it but it feels like a reminder of this.  We may be focussed on the flash of the machinery, the power of what it can appear to do, yet without an operator it is so much dead metal.  Our OERs are incredible tools, wonderfully exciting – but we can’t forget who is actually wielding them.

That’s what I hope to do in these blogs – look at the operators, beginning with teachers and then, if I have the time, also looking at politicians.  I want to talk to them about what they know about OERs, what they think of them and how they think they can be used.

Do they agree with the quote beneath the ‘Mechanical Turk’, that a global revolution in teaching is about to occur? And are we doing enough to make it happen?

Open Educational Resources – A Mechanical Turk? / Educational Design and Engagement by EDE is licensed under a Creative Commons Attribution CC BY 3.0