Education for climate justice in Scotland

Climate justice is a concept that prioritises the theories and politics of social justice in debates over climate action. As such, it is an increasingly ubiquitous concept in policy and activist discourse worldwide, including Scotland. Despite this, it remains an underdeveloped and poorly grasped concept in Scottish education. Yet Scotland has an internationally unique sustainability education approach termed Learning for Sustainability (LfS), which requires that all learners should have an entitlement to learning for sustainability and that all teachers and education professionals address Learning for Sustainability in their practice. LfS can be understood as:

Ostensibly, climate justice education can be accommodated in this educational imperative yet we argue that this ‘housing’ is problematic in a context where young people are both demanding climate justice and questioning their own educational experience. Furthermore, we suggest that it is fruitful to think of youth climate activism as educative in its own right, as young people learn to express their collective agency as citizens.

Since 2017, we have conducted exploratory qualitative research with a range of stakeholders, including teachers from across Scotland who are engaged with professional development in LfS, activists and advocacy workers. We gathered qualitative data in order to address three broad aims:

The rationale for our project was borne of our shared conviction that education fit for addressing the climate crisis must move away from a vague discourse of undifferentiated responsibility and agency. It is very difficult to generate political momentum for radical climate action if swathes of the population either feel excluded from such action or, even worse, recognise the obviously disproportionate impact that climate action would have on their own material living conditions. Climate justice is arguably a bridging concept because it introduces the possibility that in tackling climate change we can also tackle social injustice, rather than seeing the two as being at odds. It suggests that efficacious climate action must take account of different forms of social power and inequality.

Yet addressing climate justice in education is no mean feat. This is partly do with the complex interaction of social injustice and climate change, and partly to do with the complexity of justice itself. Failure to attend properly to this complexity in educational settings is bound to reproduce uncontentious, if not hegemonic, conceptualisations of justice in relation to climate change (McGregor et al. 2019). Climate justice is a contested concept to be explored through educational processes rather than simply assumed.

Despite an internationally significant policy architecture aiming to embed LfS across Scottish education, young people striking from school are taking passionate and informed action to address a perceived disconnect between their education and action on climate. Is the policy being enacted? Are teachers unsure about how to work with the issues being raised? What happens in formal education is the visible tip of the learning iceberg, but learning through climate activism suggests a radically different vision of education—one which is highly critical of the “insidious nature of capitalist ideology inside education of all subjects”, as one Extinction Rebellion activist we spoke to put it.

The central philosophical vision for LfS promotes a holistic approach, encouraging educators and learners to engage with complexity, messiness and uncertainty in an ongoing open-ended pedagogical endeavor (Higgins and Christie 2018). It is precisely this ‘messiness’ that is one of the hallmarks of learning through activism. Climate justice can be conceptualised as an ‘empty signifier’ (Laclau 2005), waiting to be filled with content by different social actors with different interests, visions of the future and theories of change. The contradictions and tensions between different visions of climate justice can themselves be educational. 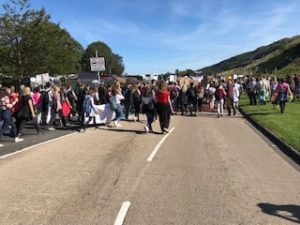 When marching in solidarity with climate strikers last year, it was notable that children and young people led the march with chants demanding ‘climate justice now’. Their chants were clear and the challenge laid down even more so. The time is now for educators to take the lead of young activists to explore what climate justice actually means, where it comes from, why it is important and what it can look like in practice. This is why we will continue our work, engaging with young people who have been striking for climate to articulate a considered and coherent vision of education for climate justice.

If you have any questions about this post, please contact Dr Callum McGregor or Dr Beth Christie.

Education for climate justice in Scotland / Childhood and Youth Studies by blogadmin is licensed under a Creative Commons Attribution CC BY 3.0