Hot off the Press : Post-sediment drape in the Northern Pyrenees explained using a box-model

Forward: Sediment production on Earth is dominated by the erosion of active mountain ranges. It seems intuitive that maximum sediment flux delivered to surrounding continental margins should correlate with active mountain building (orogenesis). Therefore, active orogenic systems where important interactions occurs between tectonics, climate and surfaces processes like Andes or Taiwan have been the place of numerous studies. However, foreland basins located at the outer edge of mountain range, which form synchronously, act as sediment traps for the erosional efflux. Moreover, the transition from active convergence (syn-orogenesis) to topographic decay (post-orogenesis) is reflected in foreland basins through the transition from subsidence to isostatic rebound. Here we explore the important consequences of this transition on the overall balance of sediment production and fluxes within orogenic systems.

The Pyrenean range is a well-established orogenic system evolving under post-orogenic conditions since at least 20 million years. An important feature of the Northern Pyrenees is the presence of post-orogenic sediments (Late Oligocene-Early Middle Miocene) which onlap and seal tectonic structures of the wedge. We coupled geological evidences and numerical modelling using a box-model to explore these interactions. We particularly aim at answering:

Application of the box-model to the Northern Pyrenees

Numerical modelling is now widely applied in geomorphologic studies, for example,  in order to predict the topographic evolution through time. Here, we use a simplified box-model to simulate the evolution of an orogenic system and associated foreland basin. The model analyses a thrust-wedge and foreland basin as two boxes which exchange mass with their surroundings by sediment transport, crustal thickening and tectonic accretion and is coupled with lithospheric flexural isostasy as illustrating in the figure below. This model allow to balance simplification of the system so that we can understand the main outputs of the model while approximating the first-order characteristics of the physical processes.

In order to apply the box-model to the Northern Pyrenees, we integrate an inverse modelling search. The general idea behind this approach is to randomly search the most probable set of parameter (i.e. lithosphere elastic thickness and diffusive transport coefficients for the range and basin) which best predict some geological evidences (i.e. range and basin elevations and basin thickness) given the numerical model (i.e. box-model). We determine how good a parameter set is by calculating a misfit function which tell us the discrepancy between the observed geological data and the predicted results from the model. This way we can identify the best set of parameters that describe the late syn to post topography and sediment flux of the Northern Pyrenees.

The key results highlighted here are: 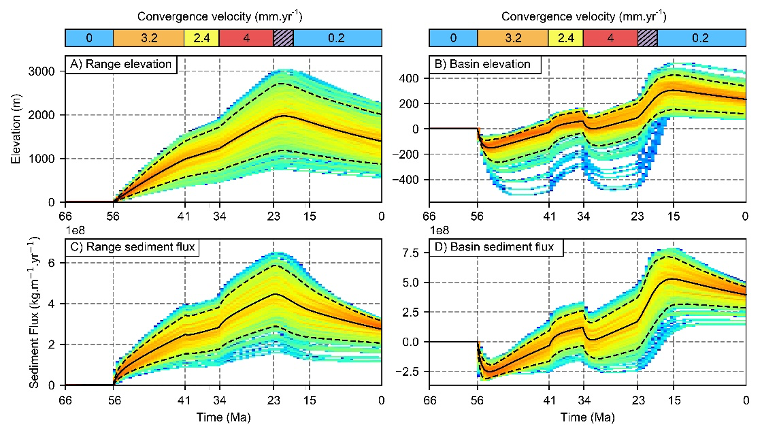 These results raise the question of what are the processes which govern the basin elevation increase and how it is link to the northern Pyrenees where a post-orogenic sediment drape is observed. The box-model also explain that, in the early post-orogenic phase, the combination of reduced flexural subsidence (i.e. reduction of space accommodation), continued high sediment flux from the range to the basin and low basin sediment flux results in aggradation in the basin. This early aggradation phase can correspond to the deposition of sediments which will onlap the thrust wedge as observed in the Northern Pyrenees. Additional basin elevation increase is also due to the isostatic flexural rebound. However as the sediment flux of the basin start to increase and to counterbalance the sediment flux from the range and the isostatic rebound, elevation in the basin is reduced in the latter post-orogenic phase.

While this model is useful to understand the dynamic of a coupled thrust-wedge and foreland basin, further analyses could be generated using models which integrate erosion and deposition laws. It should allow to infer the spatial distribution of erosion and deposition in the basin (i.e. proximal versus distal) at the post-orogenic transition. Record in deep-sea margin should also indicate an increase in sediment accumulation as deduced by early results from this model.

Hot off the Press : Post-sediment drape in the Northern Pyrenees explained using a box-model / Mark Naylor’s Blog by blogadmin is licensed under a Creative Commons Attribution CC BY 3.0

Midterm Reflection on the MEarthPhys in Geophysics with Professional Placement