The public, regulators and policy makers are understandably concerned about the magnitude of earthquakes induced by fracking operations and the risk of any consequent damage that might occur. When a M2.3 earthquake was induced 7 years ago by fracking operations in the Presse Hall project near Blackpool, the authorities responded by imposing tight limits on the magnitudes of induced earthquakes that they considered acceptable. Threshold magnitudes were set to determine specific actions in a ‘traffic light’ (green, amber or red) system, which I will described in more detail below. The threshold magnitudes were intended to provide a wide safety margin in managing the risk of felt or damaging earthquakes.

In this post, I thought I would take you through some of the information that feeds into how the fracking industry is required to manage the size of induced earthquakes. This blog post is a bit more technical than I would ideally like – but there is a lot of information that I need to cover to provide an appropriate context.

I would like to note that I am not funded by the fracking industry and the opinions expressed here are my own.

There are many factors that feed into the selection of a site for fracking operations, but the bottom line is whether they stack up for a site to be commercially viable. These factors include there being a shale of sufficient volume and quality to produce commercial quantities of oil and/or gas, the operator is likely to obtain the necessary permissions, and that it is likely that the fracking and production can be carried out safely and successfully.

Can the choice of site change the seismic hazard? The short answer is yes – alarge amount of fracking has been carried out in the US and Canada without inducing earthquakes above M=0. This is well below the level that may even be felt by the local population. The hope of the fracking industry is that this is the norm, so that fracking should be able to be carried out pretty much anywhere in the UK with similar levels of induced seismicity. However, this track record has been established in regions with very large basins with very simple geology that are continuous in all directions – mostly very boring geology. In contrast, the geology of the UK is complicated on short length-scales because it has undergone a long and complex history. There are faults all over the place – which I like to think as the laughter lines of old age. It is therefore not obvious that the lessons learned in the regions of the Mid-Western US and Canada where the risk of felt earthquakes is low will translate simply to the UK. Hence, I would not be surprised if it was more common for UK sites to experience higher levels of induced seismicity than these areas.

Just to be clear – I do not think that there is a high likelihood of a damaging earthquake occurring at the Preston New Road project. The seismicity so far recorded is clearly lower than that of the natural seismicity in the UK. But, I do not think this is the point. The industry needs to demonstrate skill in managing the risk of induced seismicity within the regulatory framework. The first approach to achieving this is by the operators carefully choosing a site where the risk of inducing felt earthquakes is assessed to be low and by demonstrating that they can limit the size of the earthquakes that occur by how they design their injection strategy. I think of this as trying to engineer the maximum magnitude that could occur during operations. I elaborate on these two topics below.

Cuadrilla’s Environmental Report (Chapter 12) describes various aspects of the expected seismic hazard posed by the fracking operations at the Preston New Road site. This Chapter is quite technical – so I will translate some of the key points. This report was published in 2015 – so it is a public record of how the site was expected to perform before operations started. Now that we have data coming in, we can compare the expected risks anticipated at the planning stage with reality.

That is quite a lot more technical detail – but I think that the above are the important points for this discussion. There is also a lot more underling detail in Appendix L – but I have not ploughed through that yet.

My reading of the Cuadrilla Environmental Report is that is anticipated that the seismicity will be low, and that it considered operations would be rarely interrupted because few events would enter the Amber region, and very few in the Red under the traffic light system. Given several events in either category have occurred within a couple weeks of starting, the initial assessment was probably over-optimistic.

A few people have been asking me how the traffic light system works. This is the formal risk management system that must be used to manage the risks associated with inducing seismicity during the operation. This is in contrast to the pre-operation Environmental report quoted above, which sought to minimise the risks in advance of any operations.

In my previous post, I gave some of the history of where the traffic light system originates – namely to reduce the risk of roof collapses in coal mines. But how has it been adapted for projects that include fracking? Is the concept directly transferable? And how can we evaluate whether it is working in practice?

The flow chart from Appendix 4 of Cuadrilla a report titled “Hydraulic Fracture Plan PNR 1/1Z”is reproduced as a diagram below.  This summarises how the traffic light management system works. In words, the traffic light system can be summarised as follows.

There are several points I will elaborate on here from my perspective as a statistical seismologist who works more commonly on natural seismicity. 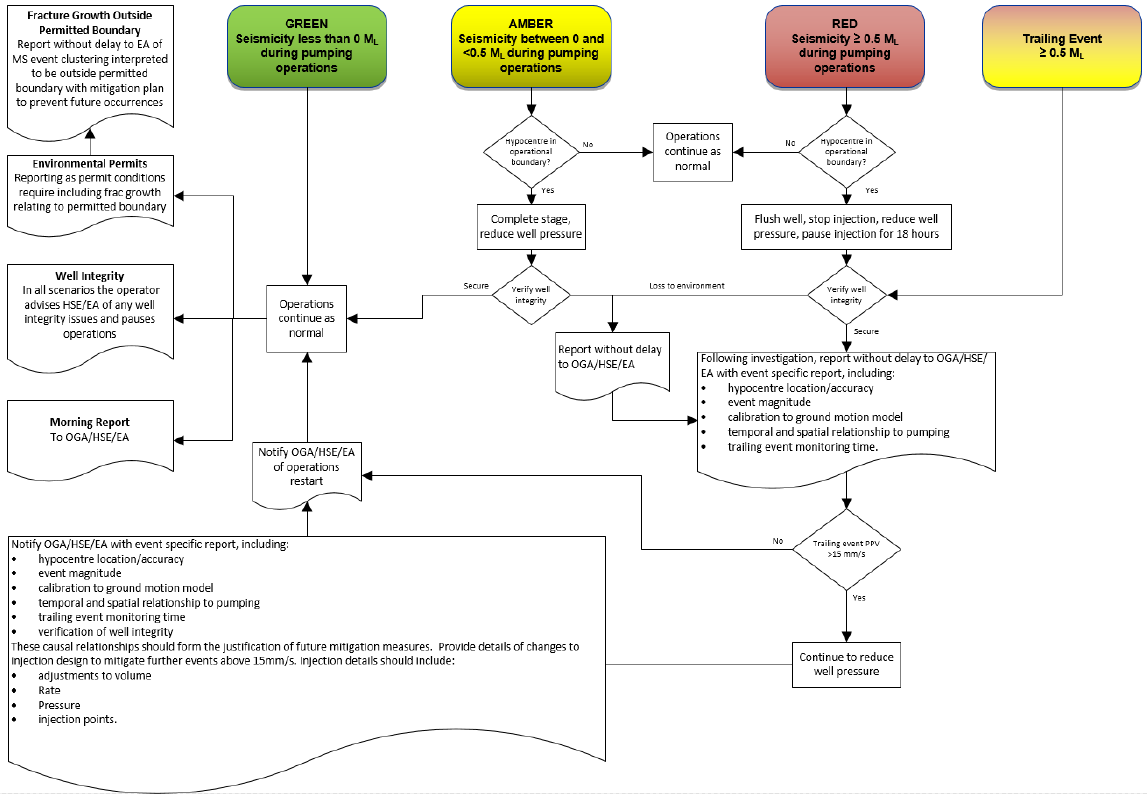 The operators of Preston New Road have had to implement the traffic light system several times in the short lifetime of the project. This is down to two reasons. First, they have not been able to keep the magnitude of fracking induced earthquakes at the low levels observed in some parts of the US and Canada. Second, the thresholds for activating the traffic light interventions are conservative in the sense that they are lower than for comparable operations in other countries.

At the same time, the seismic hazard assessment carried out before injection started suggested the unfolding scenario had a ‘low likelihood’. The confidence implied by this statement highlights potentially weak assumptions in the assessment of the uncertainties involved. Vague statements have the advantage of allowing for wriggle room – but the industry needs to have a quantitative methodology with clear metrics for success, to assess whether the risk management plan is performing well. Just one more large event would mean that two out of two sites so far in the UK have performed poorly compared to expectations.

I believe it is necessary for the fracking industry to demonstrate skill in managing the magnitude of induced earthquakes against clearly-defined metrics of success, and that it is quite possible that the uncertainties introduced by the UK’s complicated geology could prove unmanageable.

Induced Seismicity in the UK – Part 2: What is done to manage the magnitude of earthquakes? / Mark Naylor’s Blog by blogadmin is licensed under a Creative Commons Attribution CC BY 3.0