Having saved up holiday money through the pandemic, we splurged it on a fortnight divided between Egypt and Jordan. Mostly this was a cultural and historic sort of trip, but two days in Jordan’s Wadi Rum area allowed me to sneak in a little bit of geology as well. We were given a quick tour in 4WD vehicles the first day; on the second day we went for a 10km walk, during which I was able to get a proper look at some rocks.

The rocks seen close-up on the walk were all sandstones, often with clear cross-bedding and containing pebbles up to 5cm across. 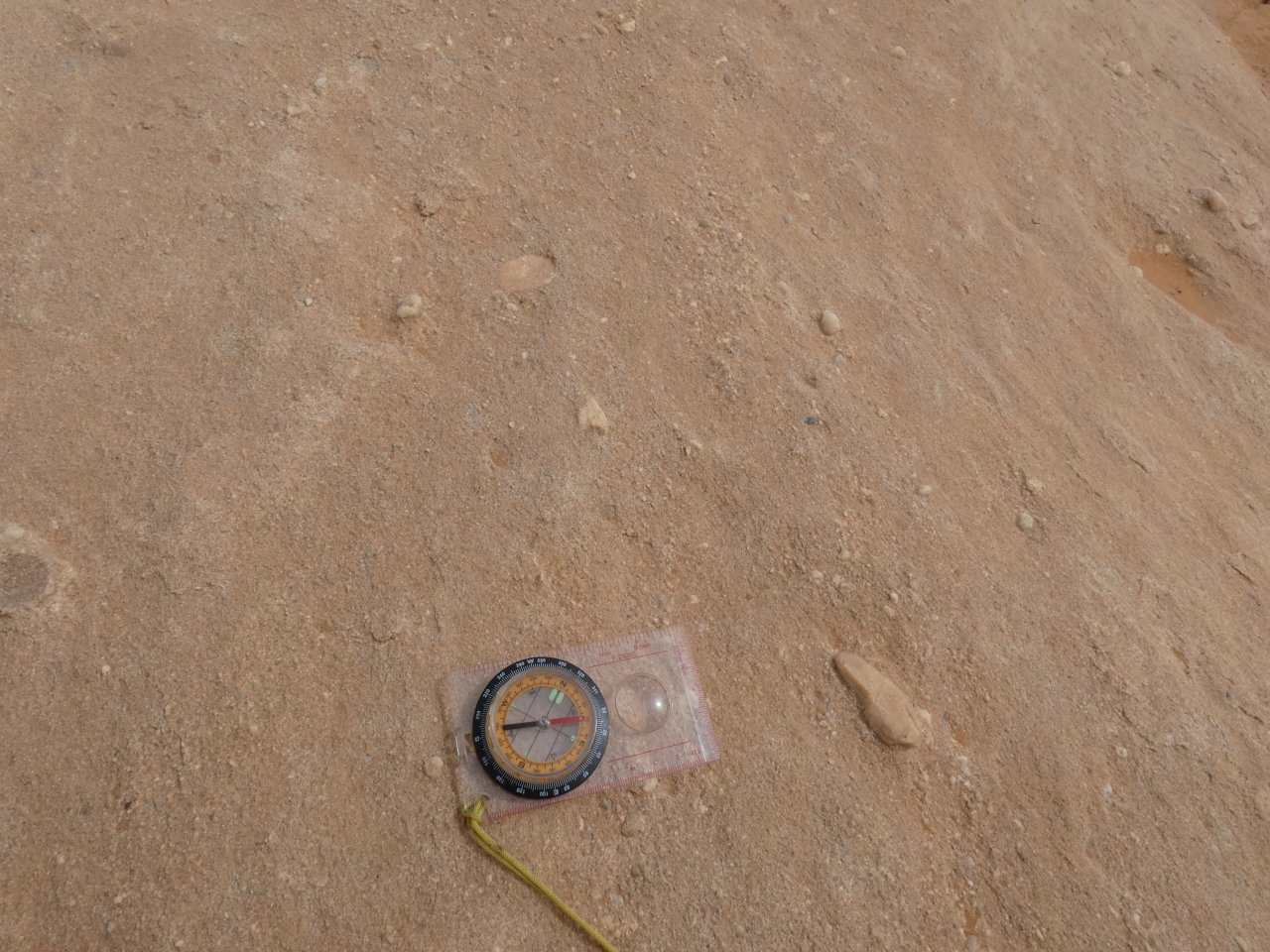 The photo shows the grain sizes but for some reason I failed to come away with a good photo showing the cross-bedding. (I think I kept looking for a better bit, and ended up without even a photo of a mediocre bit. There is a lesson there: keep taking photos: your digital camera has plenty of space.) Most of the cross-bedding units are quite large: in this picture the Bedouin tents are about 2m tall. You can see a horizontal bedding plane about 10m above the tents and can just make out the diagonal streaks of large-scale cross-bedding above this. (The colour is a bit orange because I increased the contrast in an attempt to make the cross bedding show up.) 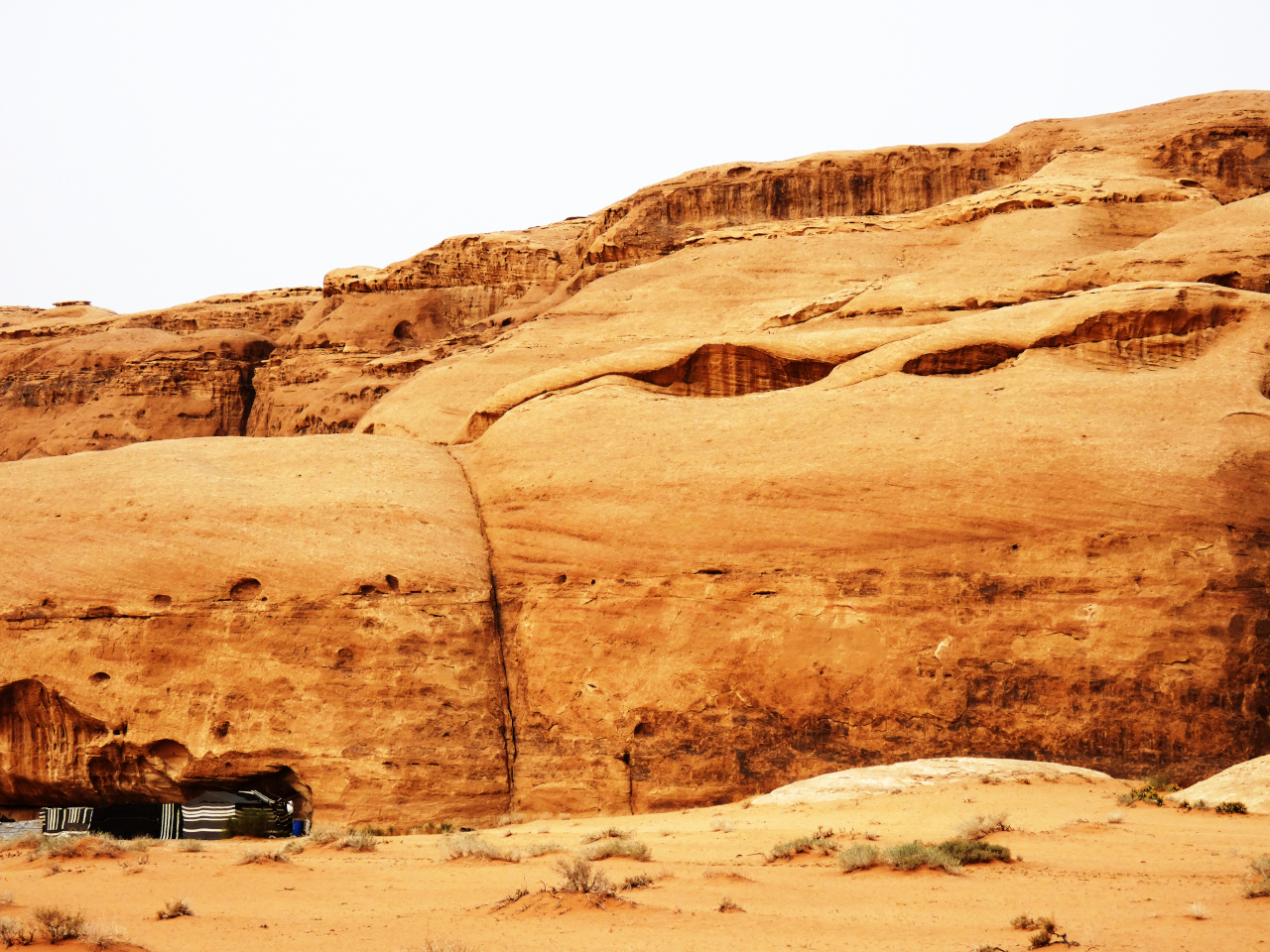 The presence of large pebbles in most of the bits I could examine closely suggests that the rock was originally deposited by rivers rather than as desert sand dunes. Every now and then there are smaller-scale structures, presumably laid down by slower-moving water. This example is from the spot labelled with a red dot near the southwest corner of the route. 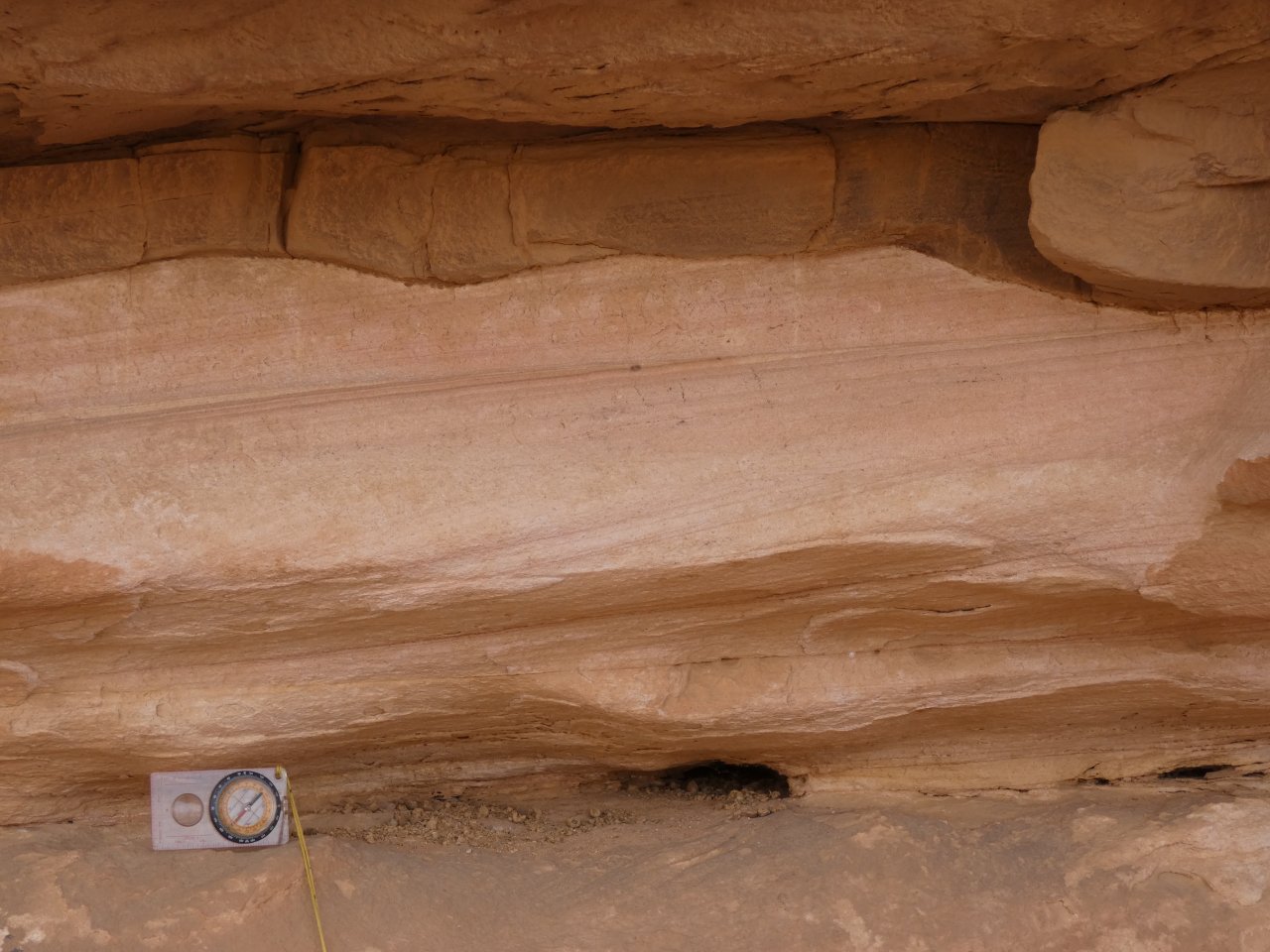 The pale unit in the centre of the photo shows cross bedding and planar bedding on a centimetre scale. It has been partly eroded away before the darker unit near the top of the picture was deposited.

The current overall appearance of the area is dominated by the way the sandstone has been eroded by wind-blown sand and by the occasional rain that falls in the winter. There are occasional spectacular natural arches; the location of this one is marked on the map. 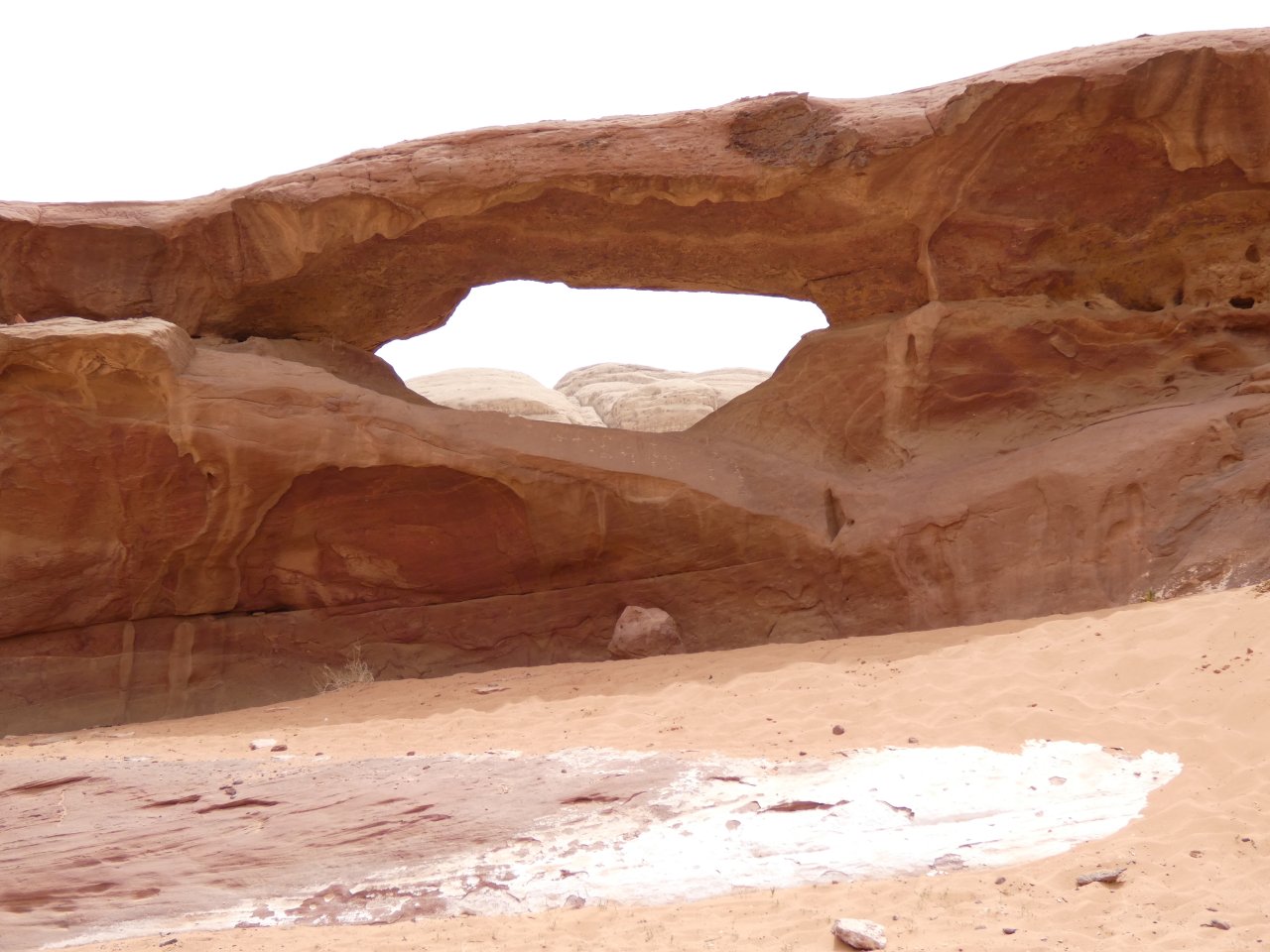 I took this panoramic view from the top of the rock containing the natural arch:

Although all the rock we visited on the walk was sandstone it was clear from what I had seen on the drive the previous day that the sandstone was resting unconformably on some other sort of rock. The tour guide described this as “granite”. The contact between sandstone and granite could be seen at a distance of a few km from the camp at the base of a mountain called Jebel al Qattar (marked on the map); I spent some time in the evening making a crude geological sketch and taking a matching photograph. 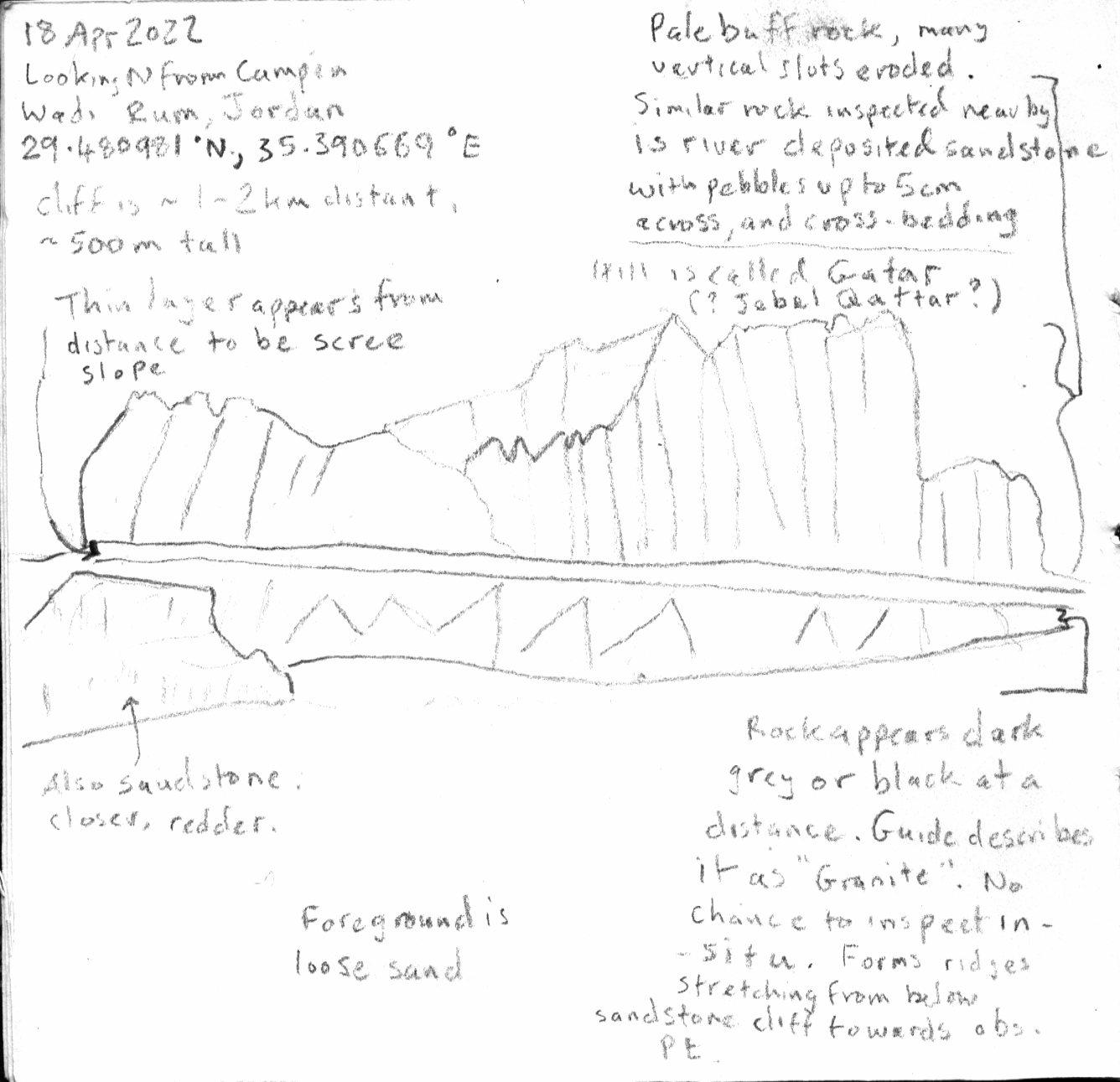 I had foolishly failed to do any geology homework before going on holiday. A bit of cribbing once I got home (e.g. here, here and here) reveals that the sandstones at Wadi Rum are of Cambrian age and the igneous basement rocks (granite with a variety of dykes intruded) are even older.

Wadi Rum was not the only place in Jordan where we saw some spectacular sandstone; the ancient city of Petra is carved out of sandstone of the same age as those at Wadi Rum. There are some beautiful examples of cross bedding and other sedimentary structures; they are often easy to observe and photograph on account of the way the Nabatean and Roman builders of the city have cut flat vertical surfaces in the rock. I forgot to put a scale on this shot, but I think the entire photo is about 1m from top to bottom. 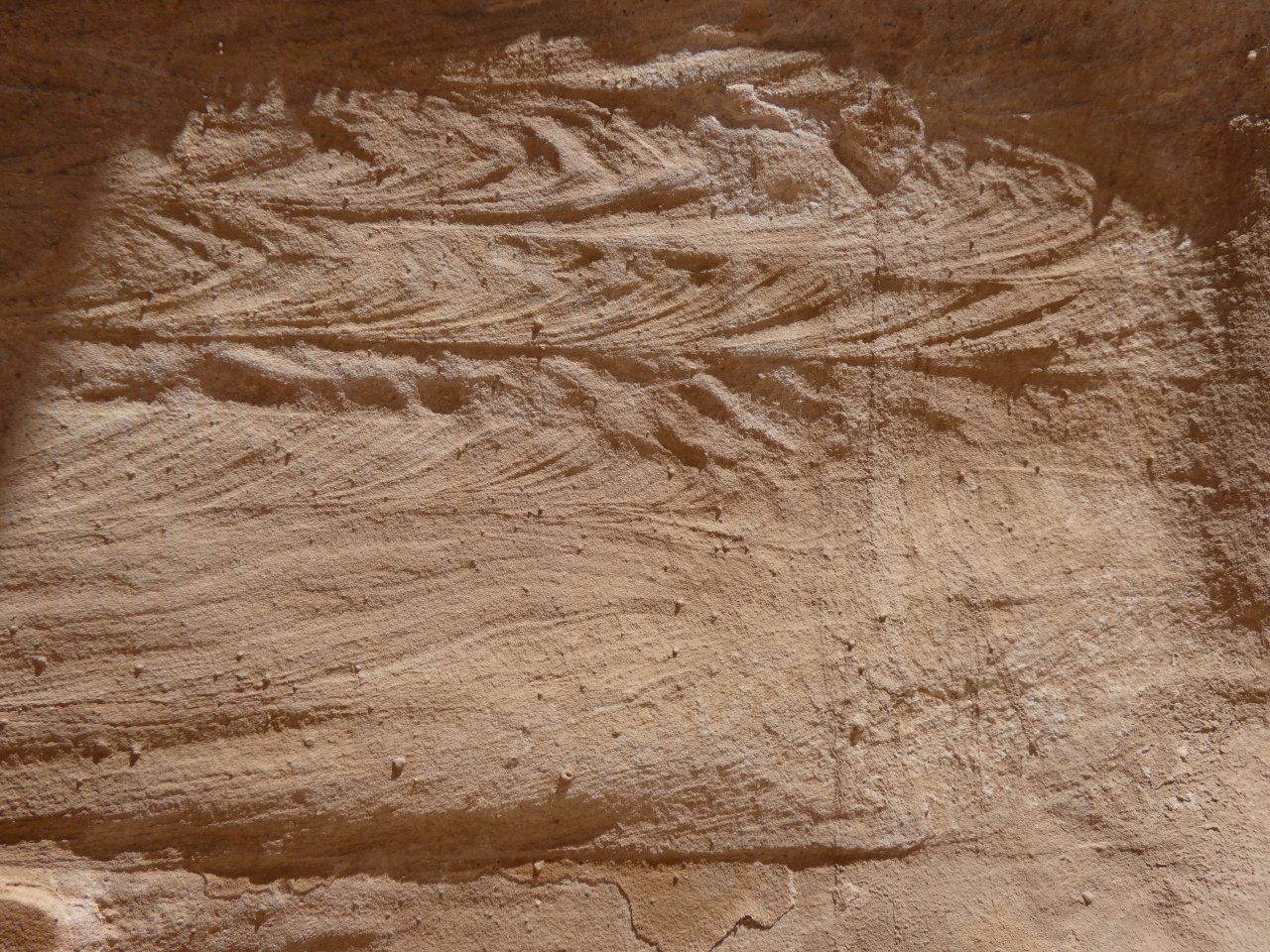 This example is one of the first monuments a visitor passes after entering the site. It and its two neighbours are known as the Djinn Blocks. The block is about 4m tall. 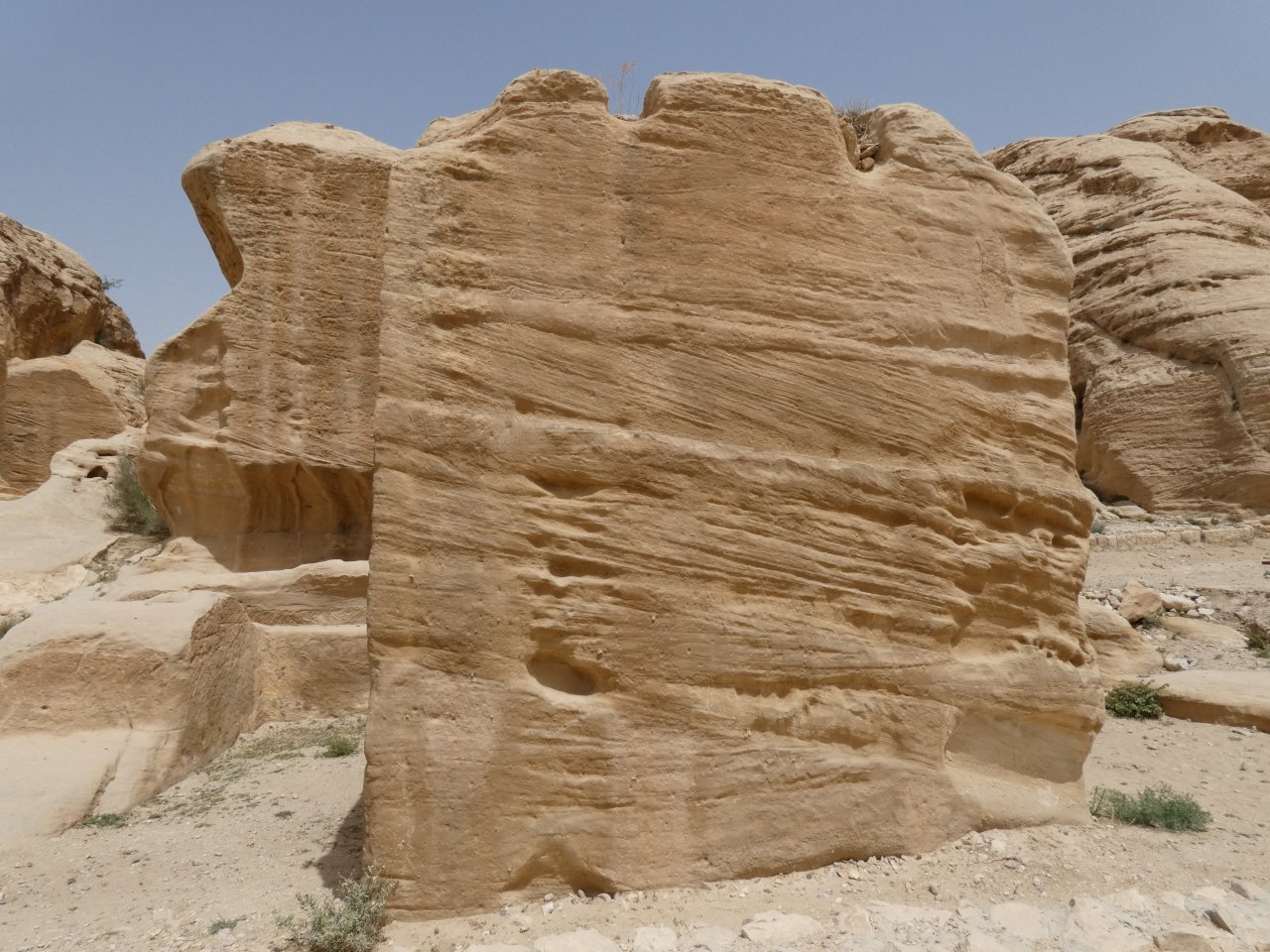 In the desert / Hugh's Geophysical Blog by blogadmin is licensed under a Creative Commons Attribution CC BY 3.0

One Reply to “In the desert”