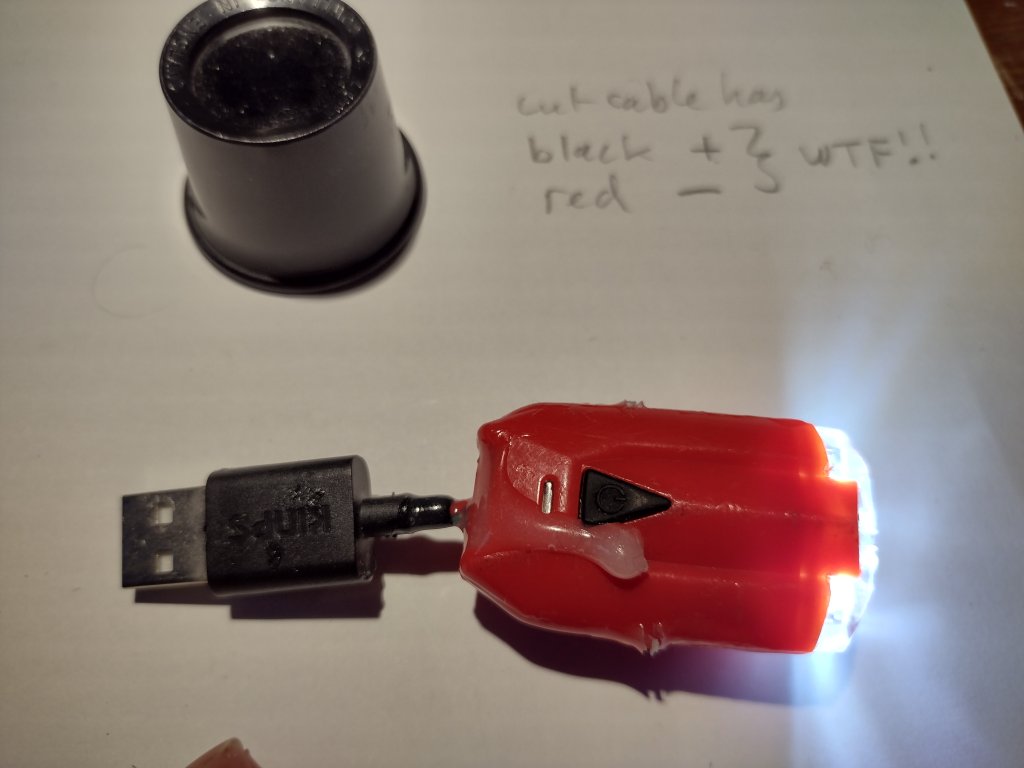 This ugly chimera was made from two items which no longer worked: A rechargeable bike headlamp which originally had a USB-micro-B socket for charging, and a USB A-to-micro-B cable on which the micro-B end had become damaged. The lamp had ceased to charge; on cracking it open with a mole wrench I discovered that the micro-B socket had become unsoldered from the circuit board. I hacked myself a fine soldering iron by winding some copper wire round the bit of a too-big soldering iron, but even with the aid of a jeweller’s loup, the task of re-soldering the micro-B socket to the circuit board was beyond me. Instead, I cut the A plug end off the dud A-to-micro-B cable, identified which two of the four wires in the cable were the power wires, and soldered them to the board. I am glad I checked the polarity carefully: the cable was shockingly booby-trapped, with the red wire being negative and the black one positive. (You can see my note to this effect in the picture.) I struggled with the cognitive dissonance of soldering the red wire to the negative side of the battery inside the case. Having glued the case back together with epoxy resin, it can now go back in my commuting rucsack instead of into the waste electronics pile.

It is worth noting that the creation of this chimera is a direct result of the EU’s decision to set out a standard for mobile phone chargers and that the connector chosen was USB micro-B. This was something of a two-edged sword of a policy. Having the same connector for all phones was brilliant: I do not think anyone mourns the days when every phone charger had a different connector. As a side-effect it also meant that the connector in question appeared on many other devices, including my little bike headlamp. The fact that the standard connector was USB micro-B was less wonderful: getting the plug into its socket requires the eyesight of a hawk and the manual dexterity of a 12-year-old. Worse, the connectors are shockingly fragile and frequently cease to work long before the device they are supposed to charge would otherwise become redundant.  The fact that the EU has, this year, mandated a new standard using USB Micro-C is good news, even though it introduces one new type of connector. Micro-C has the splendid property that it does not have a right and a wrong way round. I also suspect that it will prove to be more robust than micro-B, although I have not had a micro-C device for long enough to be sure of this.

Hacking with rubbish / Hugh's Geophysical Blog by blogadmin is licensed under a Creative Commons Attribution CC BY 3.0