A few years back, I posted about the ascent of a very small hill in Cornwall. At the time, I wrote that it had the claim to fame of being the most westerly hill in Britain. In fact, a cast iron sign on the hill announces the claim : 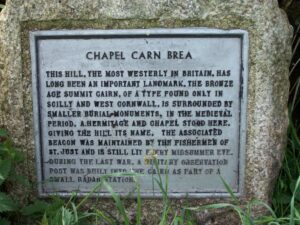 I was reminded of this when someone on the radio this morning  mentioned that the Ardnamurchan peninsula in Scotland is the most westerly place on mainland Britain, so I looked at my post, and then looked at some maps to check.  Now, Carn Brea may well be the most westerly hill in England, but Ardnamurchan is definitely some distance to the west of Land’s End and is quite hilly. The longitude of Carn Brea is 5.656 °W; about the same longitude as the base of the Ardnamurchan peninsula. You could argue for ever as to which of Ardnamurchan’s hills is big enough to count as the real westernmost hill in Britain, but Beinn Bhuidhe  at 6.190 °W is one plausible choice.

Now, when I wrote the original Carn Brea post, I thought I had felt a nagging doubt about the hill’s claim to be the most westerly in Britain. And my failing memory suggests that I checked that it was further west than Ardnamurchan. How might I have got this wrong? There is the very embarrassing possibility that I might have compared eastings on the National Grid: Carn Brea has an easting of 138598m, while Beinn Bhuidhe has an easting of 143816m. Which makes Carn Brea seem further West, except that you can not use National Grid coordinates to compare which of two places is the further east or west, especially if one is a long way north of the other. Why that is is made clear by this figure showing the grid (grey) superimposed on lines of latitude and longitude (blue dotted).

The National Grid, and the transverse Mercator projection it is built on are very useful things. The mistake I might have made is another example of the truism that no projection or coordinate system is right for every job. Why the makers of the sign got it wrong is anyone’s guess, but as I noted in the original post, Carn Brea does not have a good record on providing geographical information.

Grids and tripwires / Hugh's Geophysical Blog by blogadmin is licensed under a Creative Commons Attribution CC BY 3.0