New Scientist published my reply to a question in their “Almost the last word” column. Hooray: I can tell my line manager that I did an outreach thing. The question was “I have seen many double rainbows, but can you get triple or quadruple ones?” 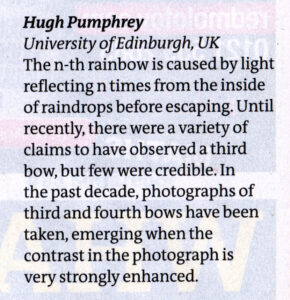 The magazine have edited my answer down to remove some material which was common to other answers; this was only to be expected. The redundant information was mostly that the third and fourth bows are seen in the opposite direction to the first and second bows, appearing as circles around the Sun. I had provided NS with links to the papers showing pictures of the third and fourth bows, rather hoping that they would reproduce a picture. The papers are here and here, but you won’t be able to see them unless you are at a University or other organisation which has a subscription to the journal “Applied Optics”.

I have wanted to get my own picture of the third and fourth rainbows ever since I first heard it was possible. No luck so far, but you can see some pictures at http://www.atoptics.co.uk/rainbows/ord34.htm

Rainbows in New Scientist / Hugh's Geophysical Blog by blogadmin is licensed under a Creative Commons Attribution CC BY 3.0