I have done “classic lump” posts about hills from various corners of Britain, and a few abroad. Now, with the pandemic, and the resulting lockdown, I am stuck with places I can reach on my permitted exercise. The nearest classic lump to Dunbar is Doon Hill, which has that splendid “classic lump” feature: a car park not far from the summit. But on this occasion I did the ascent from almost sea level, by cycling to the car part and walking the short distance to the summit from there. 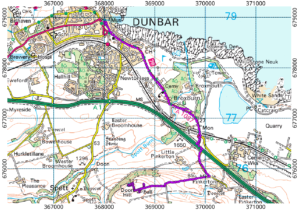 There is not much choice about cycling routes, and this one has a slightly nasty bit where it crosses the A1. (It could be nastier: the two junctions are so close together that you can get out of the minor roads directly into the central turning lane. And the central reservation means that you only have to worry about one direction of fast traffic at a time.) That bit over, it is a long steady pull to the car park, with a stop to open a rather stiff gate. 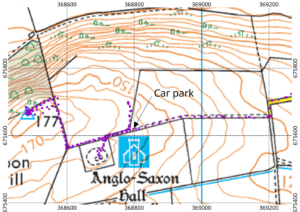 The reason for the car park is to allow drivers to visit an archaeological site at the hilltop. Although the map says “Anglo Saxon Hall”, recent research suggests that of the two large wooden halls built on the site, the earlier pre-dates the Anglo-Saxon period by 4000 years. The second hall is still thought to date to the Anglo-Saxon period, but it remains a mystery why the same site was used by two different sets of people, four millennia apart. There is not a lot to actually see: the outlines of the buildings are marked by concrete lines on the ground. The hall is not at the summit of the hill. For that, you have to abandon your car (or bike) and walk along the edge of the field adjoining the archaeological site to a gate. At this point, a 90 degree turn takes you onto a strip of land along the edge of a field, separated by a single string of barbed wire. The trig point is visible from the path, but appears to be sitting in the middle of a sea of some crop or other. Once you reach the crest of the ridge, it becomes clear that there is a grassy, un-cultivated strip that takes you to the trig point without having to trample the crops. 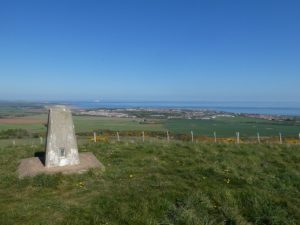 The view from the trig point is spectacular. On a very clear day you would get an improved version of the view north to the Cairngorms that is visible from Dunbar. I could not see that far on this occasion, but I could easily see the Pentland Hills and Arthur’s seat to the left and right of Traprain Law. I could also see the Lomond Hills in Fife, to either side of North Berwick Law. To the south, the view is less exciting: the rounded slopes of the Lammermuir hills rise away to the skyline, making it clear that Doon hill is really their northernmost summit.

Geologically, Doon hill is the northernmost corner of the Lower Devonian Great Conglomerate formation (orange on the map), separated from the newer rocks (Upper Devonian and Carboniferous, pink and turquoise on the map) near the coast by the Lammermuir and Innerwick faults. The Lammermuir fault is part of the Southern Uplands fault, which stretches all the way across Scotland, separating the Southern Uplands from the Central Belt. So this expedition takes you across an important geological boundary as well as providing a splendid view. The only downside for the cyclist is that you have to return by the same route, but that gives you a chance to look back at the summit from the A1087. 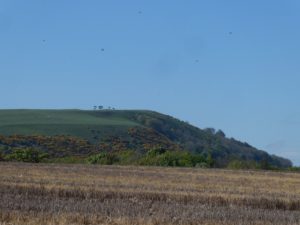 Up and Doon / Hugh's Geophysical Blog by blogadmin is licensed under a Creative Commons Attribution CC BY 3.0