There is something a bit sad about this time of year. The soft fruit and the peas are more-or-less over, the nights are drawing in, and the new academic semester is approaching like an express train through a tunnel. One thing that I do look forward to every autumn, though, is the arrival of the apple crop. I have a Bramley, and a Howgate wonder (cookers), a Worcester Pearmain (early eater), a Laxton’s Superb (very late eater) and a Blenheim Orange. The latter is sometimes described as a cooker, but they are better eaten raw than anything you can buy in a supermarket.

The remaining tree produces nasty little sour, green, astringent, tasteless apples. My guess is that the scion of the original tree died out many years ago, and what I am left with is a sprout from the rootstock. Rather than dig it out, I have been experimenting for several years with grafting on scions from trees that produce apples worth having. My first attempts were failures. I learned in my second year of trying that the magic ingredient is electrician’s tape. Forget any of that traditional stuff with string and wax, electrician’s tape is absolutely the business. Most of the years that I have tried using it, most of my grafts have taken. You can even get a variety of colours to help you remember which scion was which. 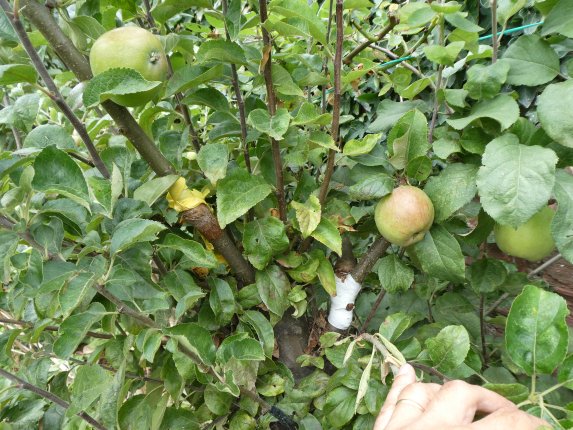 In retrospect I should have made more use of this. Yellow and white tape in the picture are two successive years’ attempts, but the scions could be anything out of my own garden. I have a blue and green one which I do know about. The blue tape is a Howgate Wonder; the tree I got the scion off is on a dwarfing rootstock and produces very little new growth each year, so I wanted to be sure that I knew which one it was. The green tape is a tree I found in a hedgerow near the Eildon hills: I enjoyed an apple from it enough when I was on a walk that I went back in the spring to steal some scions. For some reason they were hard to graft on: I did four or five, but only one of them took.

This year, I have repeated my mistake: the black tape you can see at the bottom of the picture could be a Peasegood Nonesuch or a Russet from my Mum’s garden in Cheshire, or it could be one of two trees of unknown variety in my mother-in-law’s garden in North Wales.

The reason that I am excited about this tree at the moment is that this is the first year that it has produced apples on any of the branches that I grafted on. It is going to be interesting to find out which branch is which variety of apple.

Hard graft / Hugh's Geophysical Blog by blogadmin is licensed under a Creative Commons Attribution CC BY 3.0