Well, that was an unusual day at work. Or, rather, not at work; I have spent the day on strike. Now, I have mentioned strikes in this blog before, noting that our strikes are usually just a day or two over below-inflation pay rises, and that little usually comes of them. This strike is different, and is on a scale that I have never seen in my 28 years in the UK’s universities.

The main reason that the strike is different is that it is about our pension scheme, not about our pay as such. The issue is actually very complex: to explain properly why we are so angry would require many powerpoint slides, or, at the very least, several blackboards, a good supply of chalk, and an hour of your time. The executive summary, as I see it, is as follows:

On a personal level, you can tell how serious the issue is by the fact that I stood on a picket line this morning, for the first time in my life. That is me on the far left, in the terrible hat, the others are my fellow pickets from the School of GeoSciences. (Thanks to Magnus Hagdorn for taking the photo.) 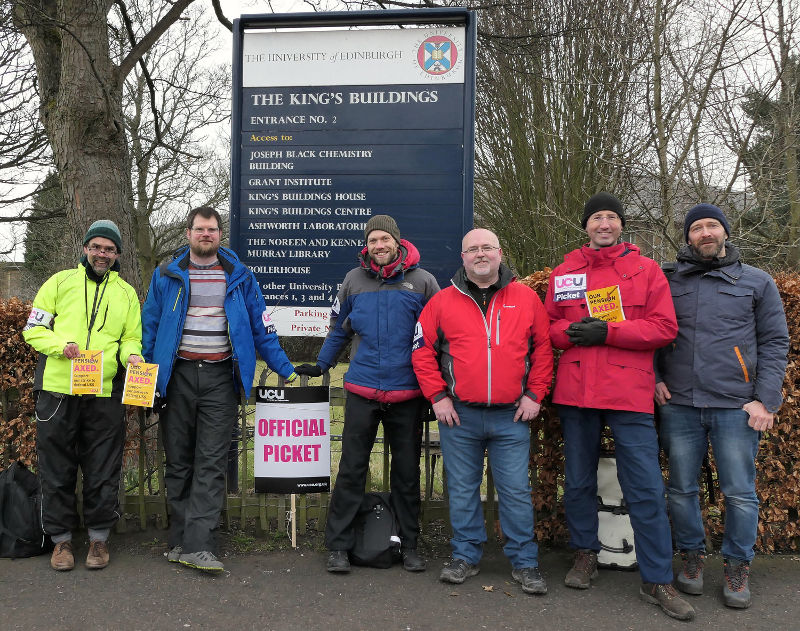 Once we had finished a morning’s picketing, I also joined a protest rally: another thing that really isn’t me. But I felt that it was important that as many of us as possible showed up, just to show how serious we were.

The rally had all the features one hopes for at such events: a good crowd, lots of placards, some angry left-wing speakers and a hopelessly inadequate PA system. Hopefully it is enough to convince our principal of the strength of feeling that he is up against.

Out, (yet again) brothers and sisters! / Hugh's Geophysical Blog by blogadmin is licensed under a Creative Commons Attribution CC BY 3.0

4 Replies to “Out, (yet again) brothers and sisters!”