I have been in Snowdonia for the weekend, pretending to do some hill walking. The weather was not ideal and I am the sort of walker who can not usually be bothered to make the effort if the clouds are down on the tops. It therefore seemed the day to head for something smaller: another “classic lump” to add to some of the previous ones I have been to. As we were staying at the excellent Bron-y-gader outdoor pursuits centre, on the west side of the Conwy valley, we headed for Pen-y-gadair as it is the nearest thing that vaguely resembles a summit.

We left the outdoor pursuit centre and walked up the road for half a kilometre. Although the hill does not look very impressive on the map, it looks very mountainous from the road. 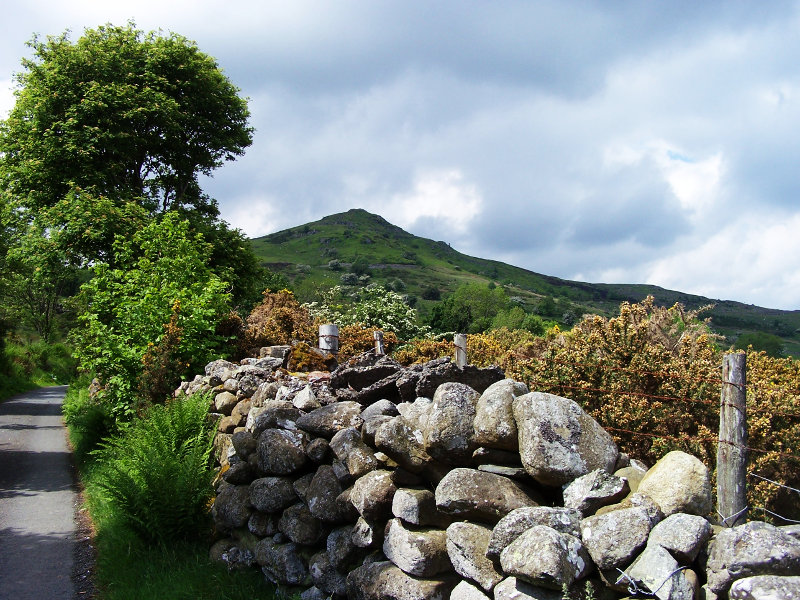 If you were not staying at Bron-y-Gader, you could park at the end of the road (P on the map) where there is a large grassy area. From there, a substantial stony track leads off to the west between stone walls. Immediately after crossing a disused leat and a stile, we left the track and headed off towards the summit, which was clearly in view to the north. There is no obvious track to the summit, but the ascent is across a pleasant grass and bilberry covered  hillside. The rocks are exposed in a few places, especially at the summit (S on the map), which has a pleasing rocky knoll of the sort that makes you feel that you have really climbed a mountain. A look at the geological map shows that the rock here is a complex mixture of igneous and sedimentary rocks dating back to the Ordovician period. But, for the non-specialist out for a walk, it is all hard grey stuff, giving rise to similar mountain terrain as elsewhere in Snowdonia, the Lake District, and many parts of the Scottish Highlands. The sweeping view of the Conwy valley is very spectacular.

On a clearer day, there would presumably be a good view of the Carneddau ridge in the other direction.

We left the summit after a leisurely lunch. It seemed dull to go back exactly the way we came, but it appears from the summit that most of the alternative descents are blocked by stone walls without gates or stiles. We achieved a bit of variety by heading west from the summit as far as the nearest wall. The route goes across short heather, with nice view back to the summit outcrop. 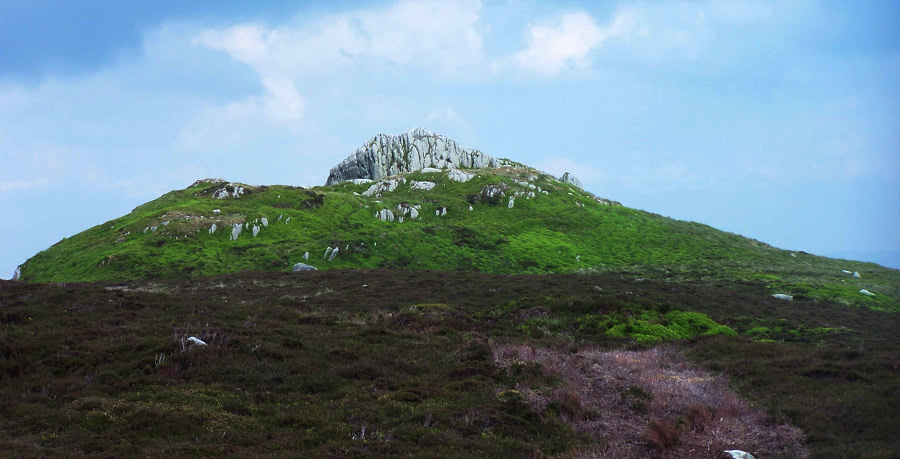 I can not really recommend the wall as a good descent route: at the bottom end there is a substantial patch of gorse growing right up to it; squeezing ourselves between the gorse and the wall was a bit uncomfortable. There was only a few tens of metres of this before we found ourselves back at the main track which took us back to the car park.

At this point my companion headed back down the road. I decided to extend the walk by heading for an even smaller summit on the other side of the road. This summit is called Pen-y-Gaer, and contains the remains of an iron-age hill fort. The walk to it goes along an easy path across a field, with a very small ascent through the remains of the fort ramparts. There is a good view back to Pen-y-Gadair, which looks like a proper mountain from this angle. 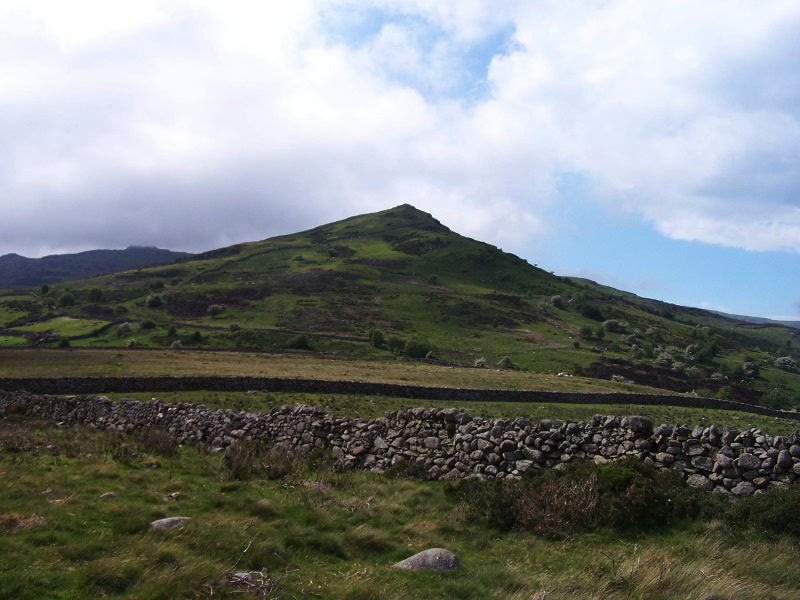 The summit itself is marked by a small cairn, surrounded by a flat grassy area. 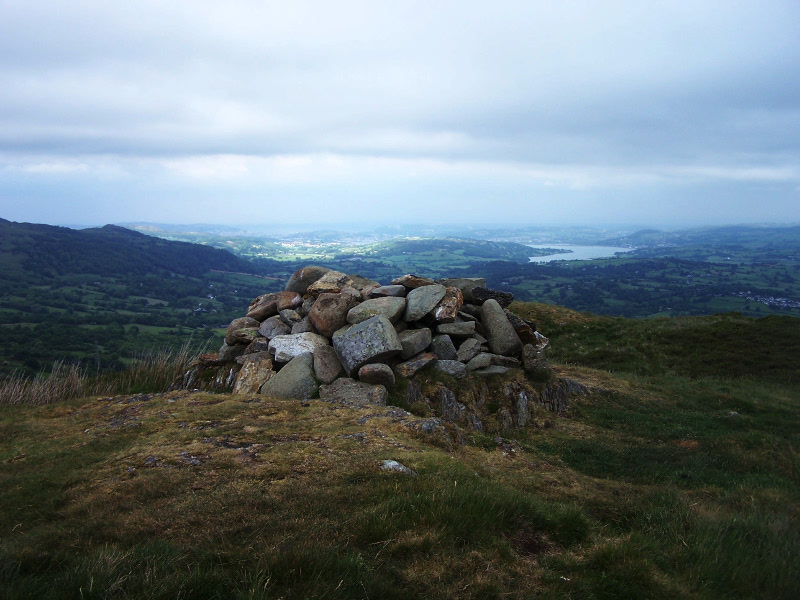 The best view is obtained by heading eastward from the summit to the edge of the hill, from where you can see the whole of the lower Conwy valley. The view from here is somehow more satisfactory than that from Pen-y-Gadair as it does not have Pen-y-Gaer itself blocking off a part of the valley.

The sensible route down from the hill fort would have been to return the way I came, back to the top of the road. You would definitely want to do this if you had parked there. As I could see the outdoor pursuits centre from the hill, and could also see a gate in the wall between the hill and the road, I elected to descend the hillside directly. The descent was not too bad (although the gorse is encroaching on this area) and, although the gate was firmly tied shut, there is a footpath with a stile that crosses the wall only a few metres downhill from it. From there it was only a short way back up the road to Bron-y-Gader. Two real mountains for very little effort!

Two summits for the price of one / Hugh's Geophysical Blog by blogadmin is licensed under a Creative Commons Attribution CC BY 3.0

3 Replies to “Two summits for the price of one”