This is another in my occasional series of classic lump ascents. Like the first one, this one is in the Canary Islands. A purist might argue that at 608m, Atalaya de Femés is far too impressive to count as a classic lump, especially as it is the highest point in the southern part of Lanzarote. I think it counts because the road takes you up to over 300m asl, leaving a mere 300m of ascent.

The peak is in the Los Ajaches massif; I could see the whole range spread out in front of me as I drove towards it along the LZ-2. 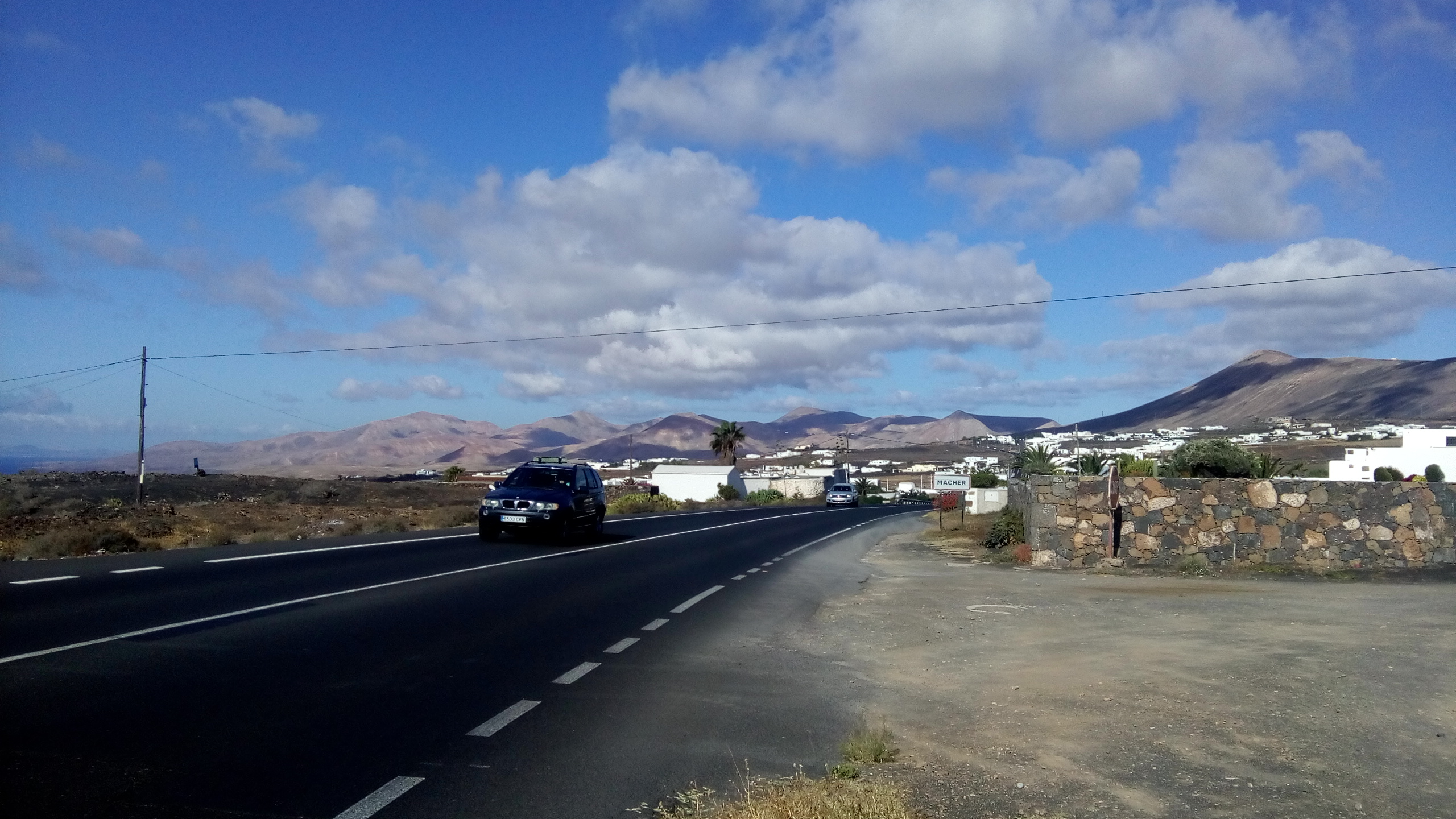 Atalaya de Femés is towards the right of the range. When I stopped to take the photo I could identify it by the cluster of radio masts on the summit, but you can’t see these in the picture. The mountain is very obvious to your right as you approach Femés from the northeast along the LZ-702. 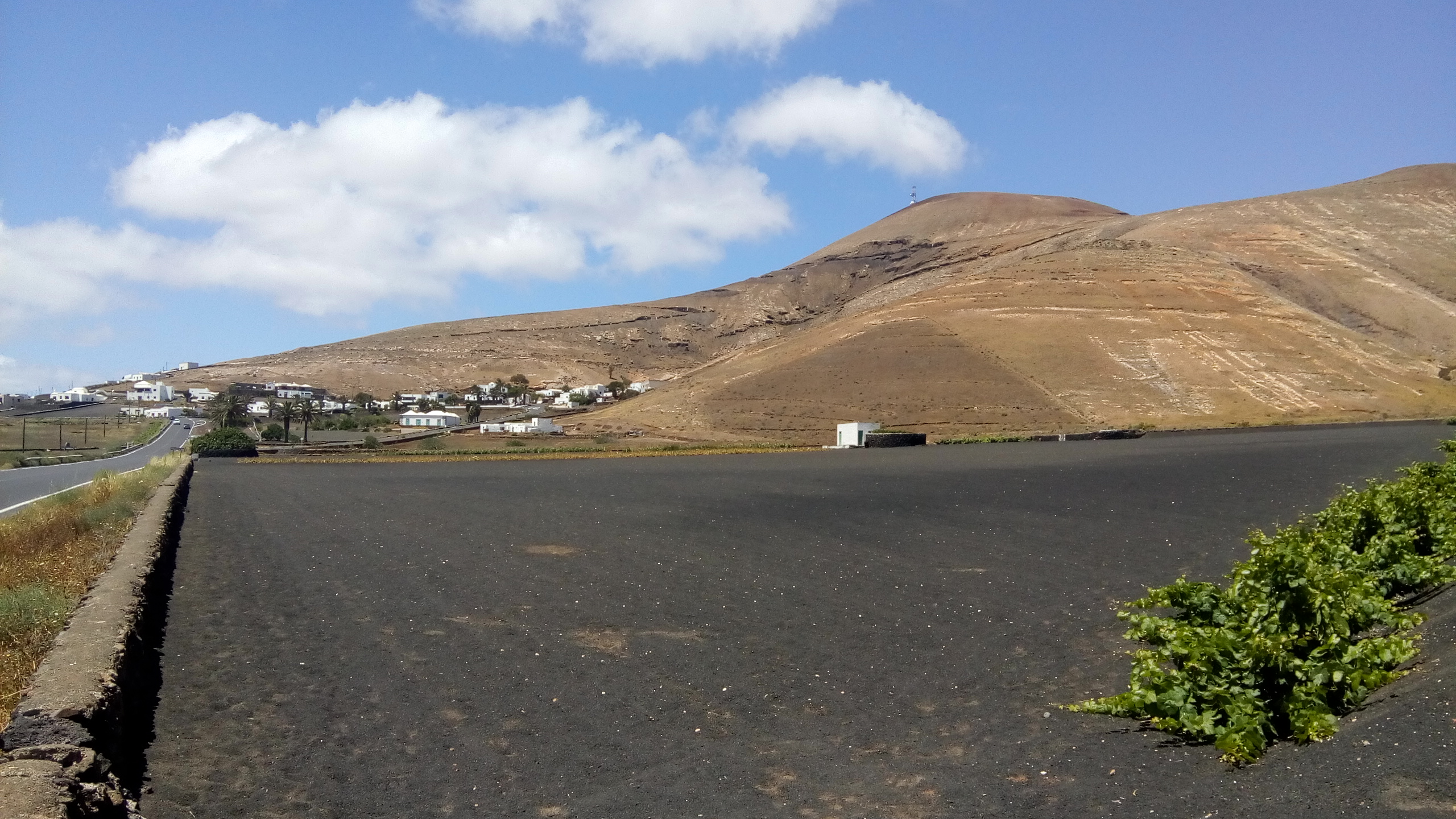 Most of the Ajaches massif is the eroded remains of a shield volcano that erupted 14 million years ago. Atalaya de Femés itself, however, is a much more recent cinder cone, much older than written records​, but less than one million years old.

It is easy to park in the upper part of Femés village. The only slightly tricky part of the ascent is locating the start of the summit path. While looking for this, I found a small quarry which gives a clear slice through the local geology. 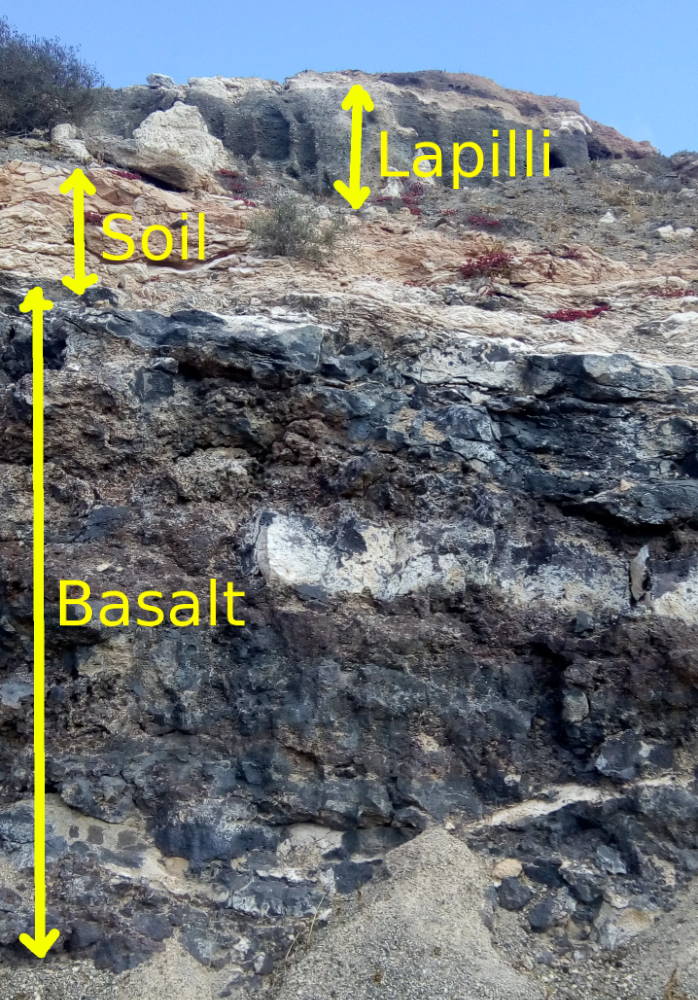 The hard grey stone at the bottom is basalt, presumably part of the Ajaches Shield volcano. On top of that is a fossil soil layer: probably a mix of wind-blown sand and carbonates left by evaporating water. And on top of that is a layer of volcanic lapilli from the eruption of Atalaya de Femés itself.

I eventually found the path up the hill; it leaves the upper part of the village in a northeasterly direction, almost parallel to the main road. It rounds a shoulder of the hill, giving a view of the lower part of the village. At a fork in the track I took the left branch and followed this all the way to the summit.

The track has been constructed with some care, to allow vehicles to access the radio masts. The switchback turns of the track cut down into the lapilli, exposing several thin carbonate layers; these presumably mark pauses in the eruption. 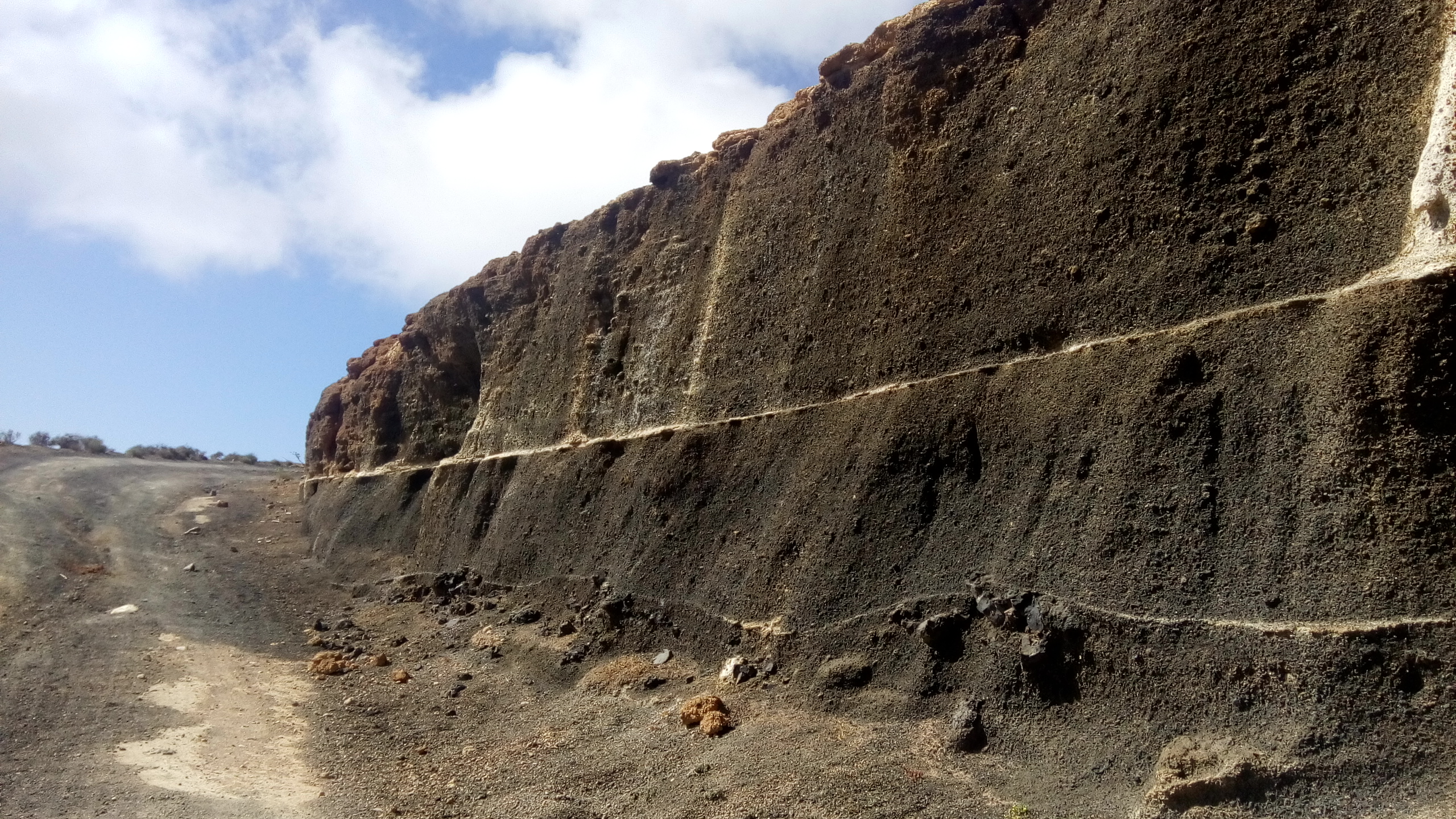 The lowest section of this exposure has some sizeable volcanic bombs in it. The exposure is about 2m tall; clearly there is a much greater depth of lapilli here than in the village.

The view from the summit is stunning, and the radio masts, while ugly, provide some shade from which to enjoy it.

This is the view looking South across the Rubicon desert and the resort of Playa Blanca towards the neighbouring island of Fuerteventura.

This is the view East, across the Ajaches massif, with the village of Femés in front of it.

And this is the view North. The vast lava fields from the 1730s eruptions can be seen in the distance. The crater in the foreground is Atalaya de Femés’s own summit crater; the rim of it is very unequal, the summit side, where I am standing, is much taller than the other side.

Having reached the summit, one could decree the hill conquered and return to Femés by the same route. As I had the whole morning I extended the walk a few kilometres. I left the summit by the same track, but branched off to the left along a much fainter track running along a ridge that separates the Femés valley from the valley to the northwest. It is a nice, airy stroll. After  a couple of km, the track starts to descend the wrong side of the ridge, but there is a faint cairned path across a field which joins a larger gravel road heading back to the LZ-702. Rather than follow the gravel road to its end, I left it at a sharp bend, aiming for a track that returns to the LZ-702 closer to Femes, passing between the ridge and some fields. 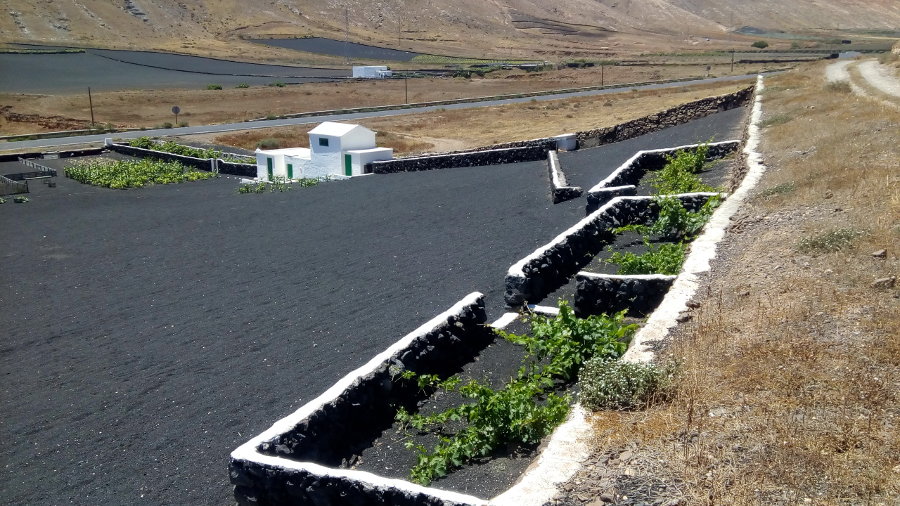 The fields puzzle me: many of them are clearly looked after, with the soil covered with volcanic gravel in the local fashion,  but have nothing growing apart from a row of vines and a small patch of maize. Presumably there is some crop grown at another time of year, which has all been harvested by May.

This track avoids a kilometre of the LZ-702. When I finally joined the road I realised what a good thing this was; the verges are not good walking and the traffic is quite fast. Fortunately, although most of the last km is along the road, a good part of it is within the village, where there are sidewalks.

A good walk, then, and a nice change from the beach.

Another Canarian summit / Hugh's Geophysical Blog by blogadmin is licensed under a Creative Commons Attribution CC BY 3.0

3 Replies to “Another Canarian summit”