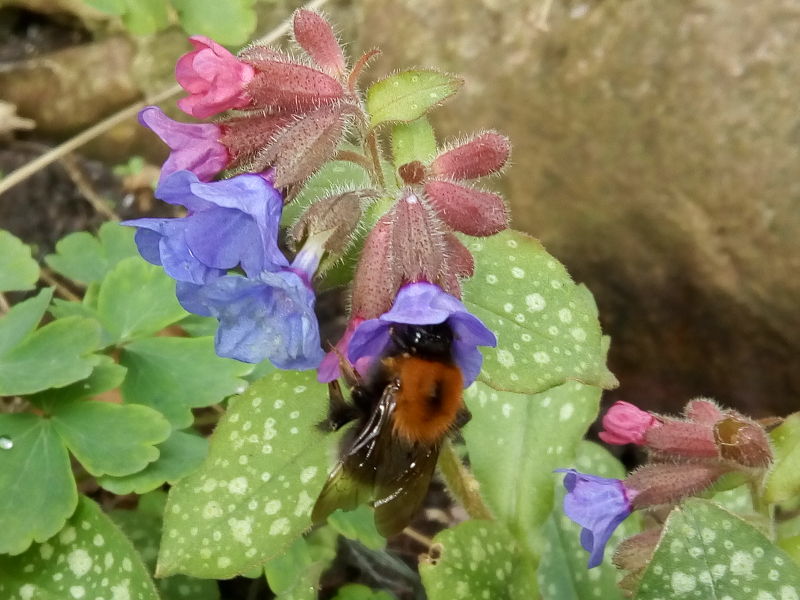 One of my favourite signs of spring is the first bumblebee. This will always be a queen who has hibernated over the winter and is now out looking for nectar and a nest site. They seem impossibly large, compared to the worker bees that are all over the garden later in the year. They are also infuriatingly hard to photograph: I was surprised that this one stayed still for long enough for me to snatch this shot with my mobile phone.

Unless my bee identification skills have let me down, this is a tree bumble bee (bombus hypnorum). This species only arrived in Britain in 2001 and has spread rapidly since. A purist (or whatever you call the ecological equivalent of a UKIP member) might feel inclined to lump this species in with signal crayfish, Japanese knotweed and the grey squirrel as an invading alien pest. But given the decline of bumble bee numbers in general, and the fact that bombus hypnorum does not seem to be competing with other bumble bee species for nest sites or resources, most people seem un-bothered by the new arrival. These bees like to nest in nesting boxes intended for birds. I would be quite happy for them to have any of the three nesting boxes in my garden, in which no bird has ever bothered nesting.

Spring is a buzzing. / Hugh's Geophysical Blog by blogadmin is licensed under a Creative Commons Attribution CC BY 3.0