As I have noted before, I am a physicist and, like many hard scientists, tend to regard geography as a rather alien kind of subject. But I do love maps. The border between England and Scotland is historically the most important line drawn on a map within easy drive of my home, and I have for a long time had a plan at the back of my mind to drive along it and to visit all the places where it is possible to drive across it on a public road. For over 300 years, the border has been a line on the ground separating two friendly jurisdictions under the same government. But the recent actions of both politicians and the voting public mean that in the near future it may become a far more impenetrable feature. This is not a political blog, and is certainly not the place to discuss the rights and wrongs of brexit and Scottish independence. But the discussion of those matters elsewhere made me think that  I should put my plan into action now, in case the future turns out to be one where the border can only be crossed at a few manned checkpoints.

Before going out, I thought it wise to investigate the scale of my ambition. Rather than cover the floor with paper maps, I made use of the fact that my employer provides us with access to the Edina Digimap service; I downloaded maps of the border region at a range of scales, and loaded them into a GIS program. (I used QGIS, because it is free, and is really very good these days.) I am not an expert on the uses of GIS, although some of my colleagues are; they run a splendid M.Sc degree on the subject. I nevertheless managed to find QGIS useful for this simple task. By zooming in to the 1:50000 or 1:25000 scale I could mark and number all the crossing points from East to West with some accuracy. I could then zoom out, and switch to a UK overview map to see the big picture. 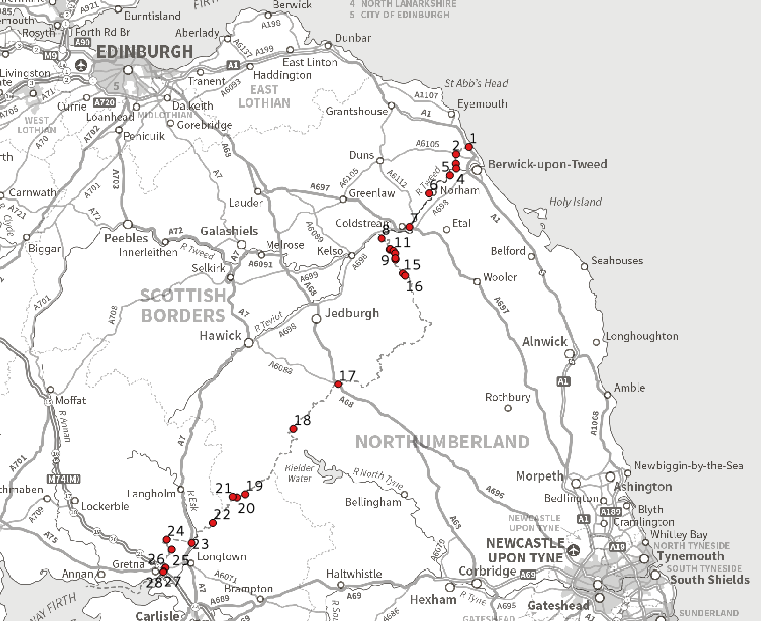 The crossing points are not at all evenly spaced. They are also not easy to count as there are several places where the road runs along the border rather than across it. Where this happens, I put one mark where the border enters the road system and another where it leaves it. I suspect other people might choose a different numbering scheme and come to a different total, especially if they have a different opinion as to what constitutes a road that they are prepared to drive their car along.

We had something to do in Berwick on Saturday, so it seemed a good opportunity to visit the crossings at the Eastern end of the border. As the map below shows, there are about 16 in total. 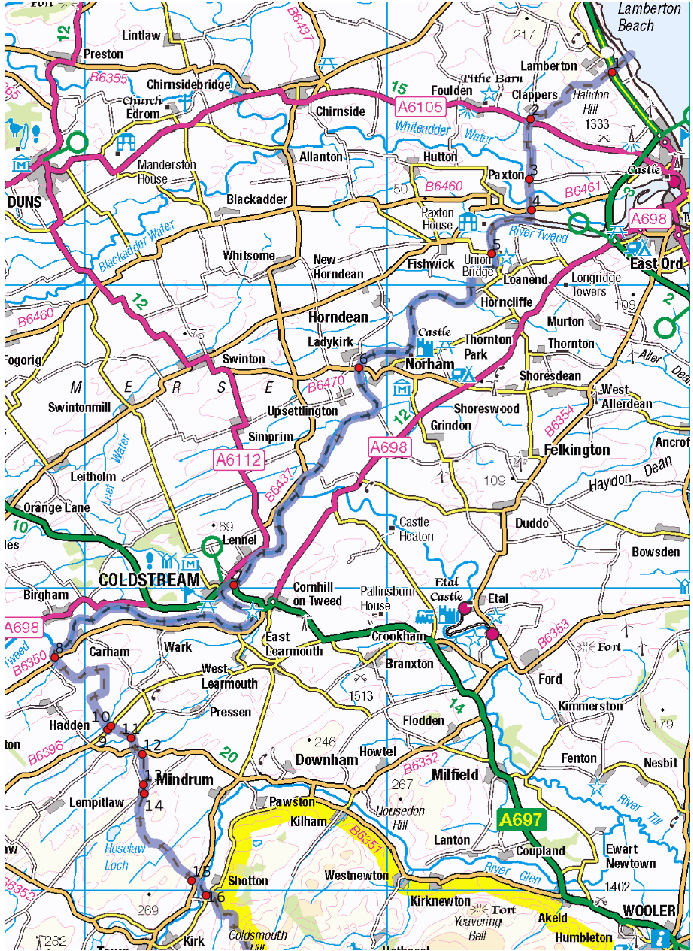 Crossing 1 is familiar to many people as it is on the A1; we stopped there on the way in to Berwick. 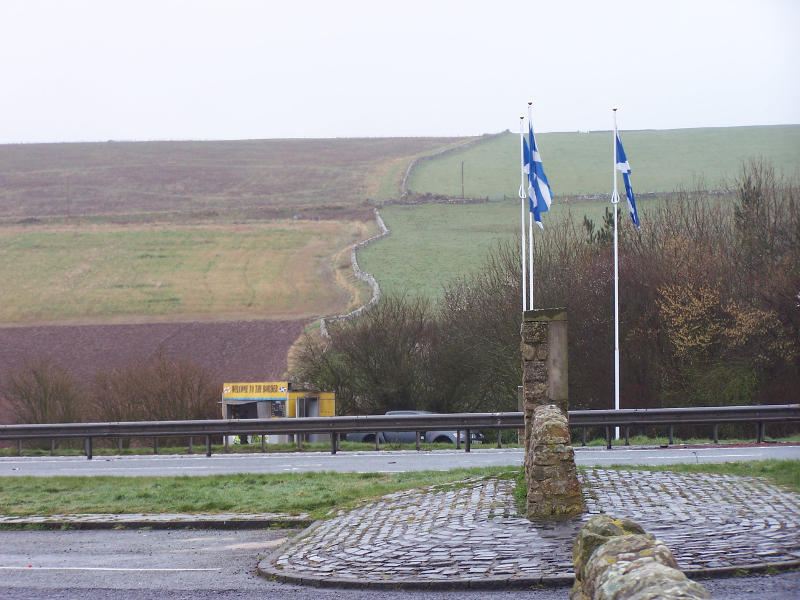 Without looking at traffic statistics I would guess that this is the second busiest crossing, after the M74 at Gretna. There is a layby on each side of the road where you can stop and look along the border. Behind the camera, to the East, the border crosses a field and the East Coast Main Line, before reaching the coast. In the picture, the border snakes up the hillside, following the wall.

While in Berwick, I took this photo of the old bridge.

In mediaeval times, Berwick was in Scotland, and the border ran down the centre of the river Tweed. The town changed hands a number of times in the incessant border wars. I think it was captured or ceded seven times, but it was certainly an odd number as the town ended up in England. The stout city walls as we see them now were built in Elizabethan times to keep it that way.  The little squarish chunk of England surrounding Berwick is known as the Berwick bounds and the first four border crossings are on its edges. 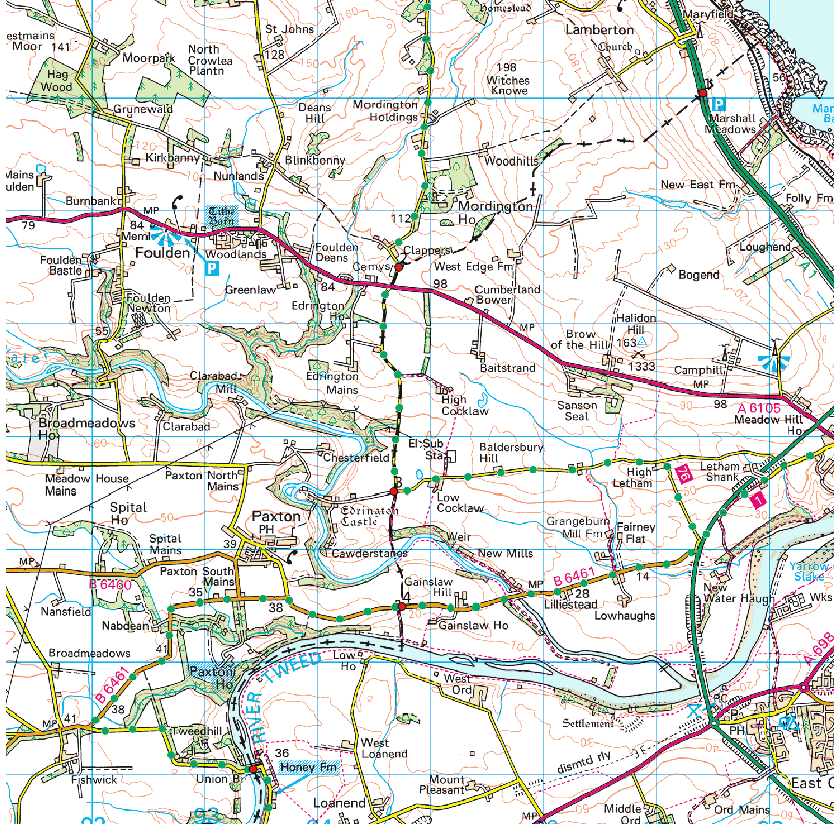 We headed out of Berwick along the A6105. At the point where this road crosses the border, the border runs along a minor road.  The photo below is looking south along the minor road towards the A6105; the border joins the road at my crossing point 2, just behind the camera. 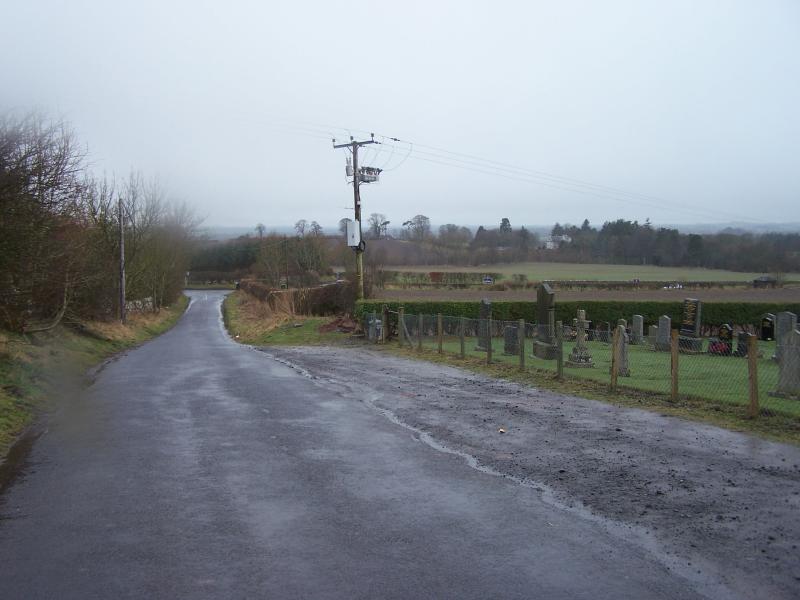 Crossing the A6105, we drove along the border for about 2km to crossing point 3. The minor road had so many potholes that my (very understanding and helpful) navigator was moved to suggest that perhaps both Northumberland and Scottish Borders were each pretending that the road belonged to the other side, so they didn’t have to maintain it. The photo below is crossing point 3; the border leaves the road at this point. 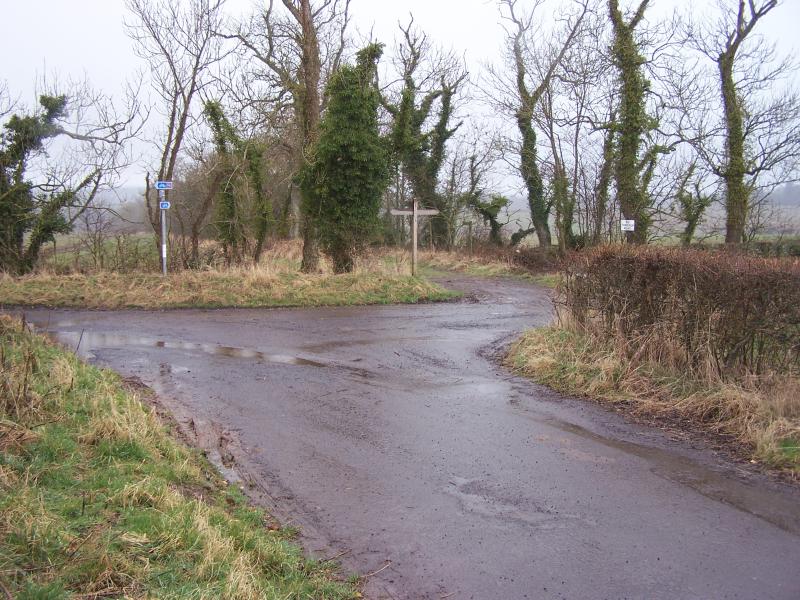 It heads off into the countryside, following the non-drivable track behind the wooden signpost. Crossing 4, on the B6461, is not far away from crossing 3 as the crow flies, but the Whiteadder water is in the way; it is a detour of several kilometres to reach it by car. 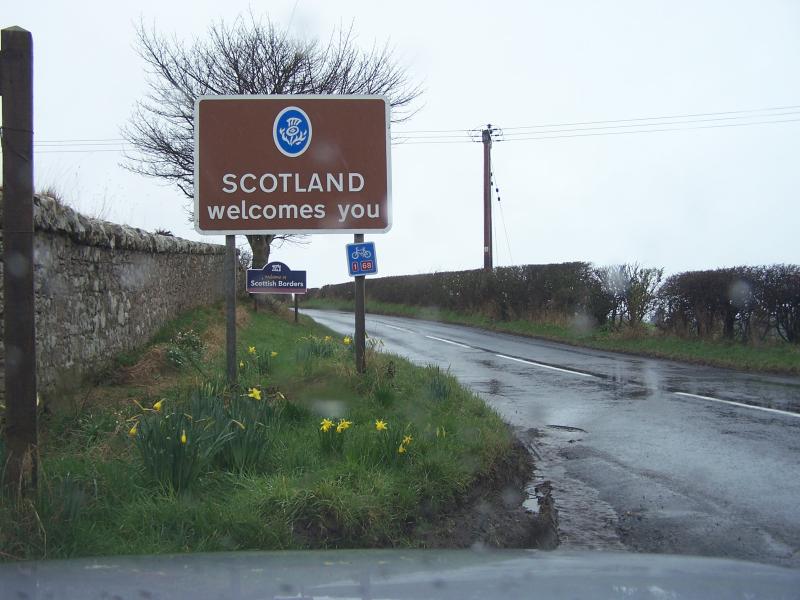 It was raining hard when we got to crossing 4. I stayed in the car and took the picture above through the window. The border heads southwards towards the river Tweed down an un-driveable track to my left as I took the picture. Where it enters the river is the end of the Berwick bounds; from there, the border follows the river Tweed for about 16km. The Tweed is a very substantial river, so any border crossing in this stretch requires a very substantial bridge; there are only three border bridges on the river. The first (crossing 5 on the maps) is this delightful suspension bridge, known as the Chain Bridge.

When built, the chain bridge was an important addition to the transport network. Nowadays it is on a very minor road and has a strict weight limit: only one car is allowed on it at a time. On the England side (the left of the photograph) the bridge is anchored directly into the cliff. Having negotiated the bridge (very carefully) we drove through England to the little village of Norham. Crossing 6 is close to the village and is this very substantial stone bridge. 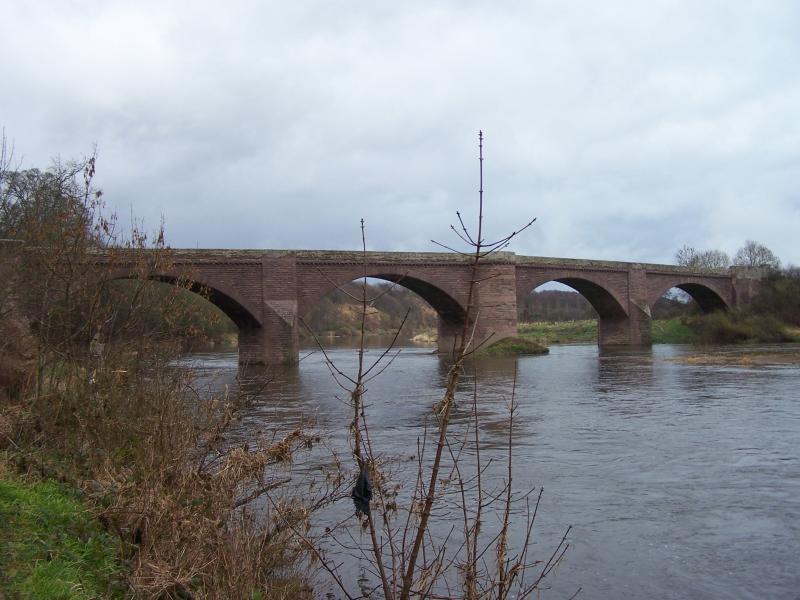 Having crossed it, we drove through Scotland as far as Coldstream, where crossing 7, another splendid bridge, took us back into England. It is hard to see the bridge from the England side, so I parked the car and walked back into Scotland, where the road takes a sharp turn, giving a good view.

After Coldstream, the border follows the Tweed for another 8 or 9 kilometres before leaving its south bank. Above this point, the Tweed is entirely in Scotland, and the border heads south into an area of farmland criss-crossed by many minor roads. It gets quite complicated to find all the crossings in this region; a detailed map is a necessity. 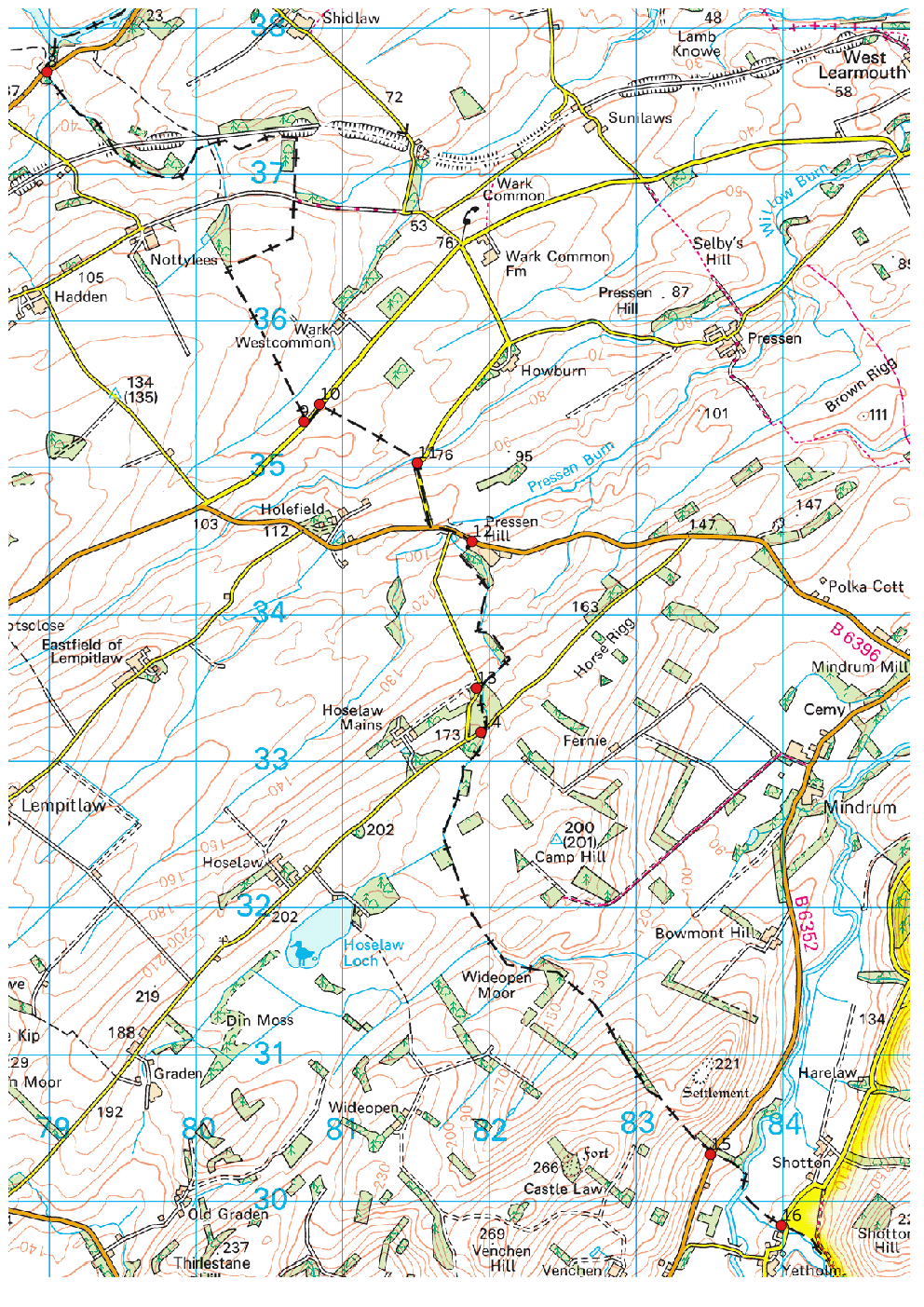 Crossing 8 is straightforward; it is on the B6350 and has the usual signs. The actual border appears to run along this little stream. 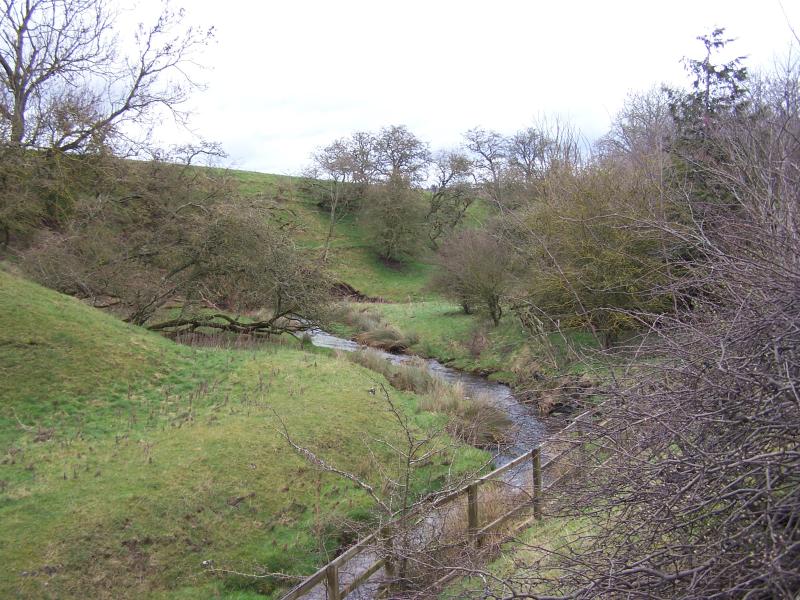 Crossings 9 and 10 are somewhere along this straight stretch of minor road. The border runs along the road for a little way, but it is far from clear where, unless you go and look through the hedge for field boundaries. 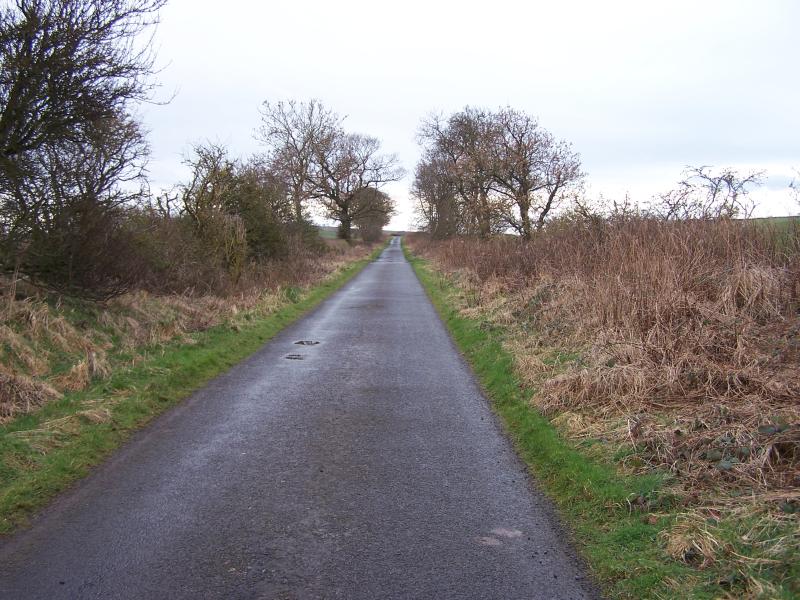 Crossings 11 and 12 are a bit more complicated. The border enters the road system at this bend of a minor road, having crossed the fields in the background from crossing 10. It then follows the minor road to its junction with the B6396, turns left onto the B road, leaving it a few hundred metres later to follow a small burn across a field. 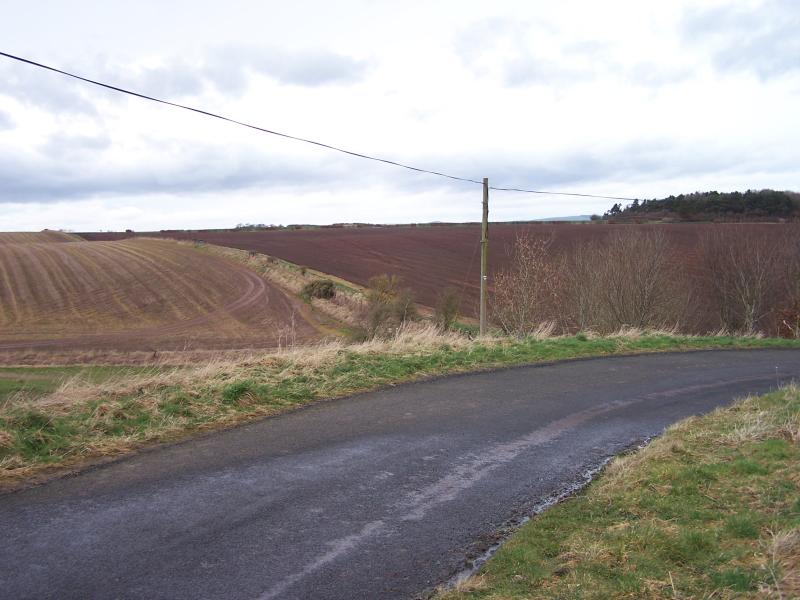 We took a small road parallel to the burn on the England side, visiting crossing 13 in the process. I am not sure whether crossing 13 counts; the border enters and leaves the road on the same side and on some maps does not appear to touch it. I did not stop to take a picture of it. At crossing 14, the burn passes under the road. 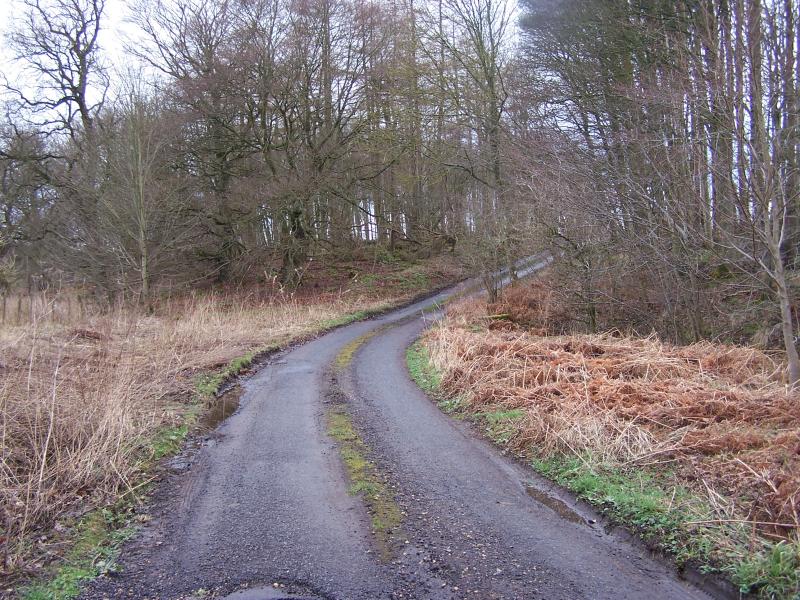 The border is about where the road bends; the view is looking west-ish from Scotland into England.

It is a bit of a drive from crossing 14 to crossings 15 and 16, near the twin towns of Kirk Yetholm and Town Yetholm. Both these crossings have the counter-intuitive feature that you travel almost north to cross from Scotland into England. This view is from crossing 16, looking northwest along the border, and across the Bowmont Water, towards crossing 15. 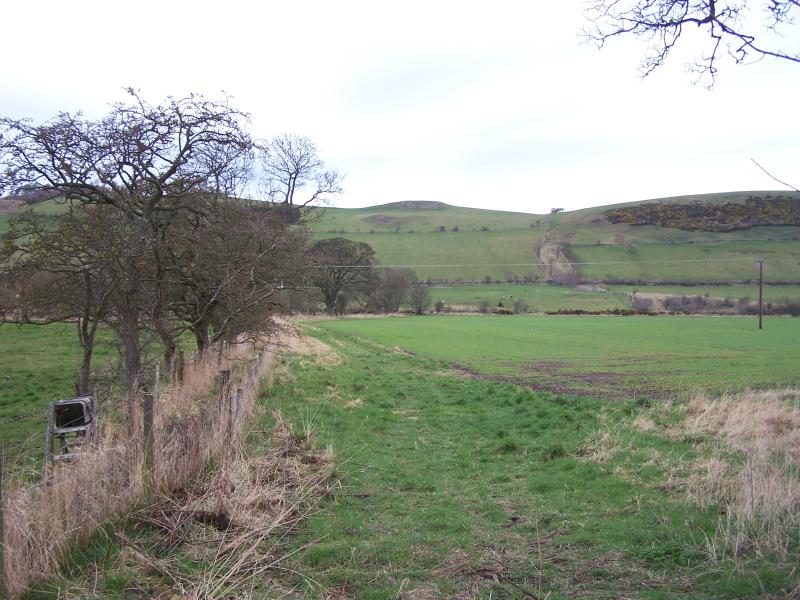 In the foreground, the border follows the line of trees, wiggles a bit to cross the river before heading for crossing 15 and then the skyline. Crossing 15 is on the B6352, which is the dark horizontal line just below the electricity wire. My photo of  crossing 16 is taken from the same spot, looking in the opposite direction.  Despite being on a minor road it has signs in both directions; the curve of the road means that you can get both signs into the same photograph. 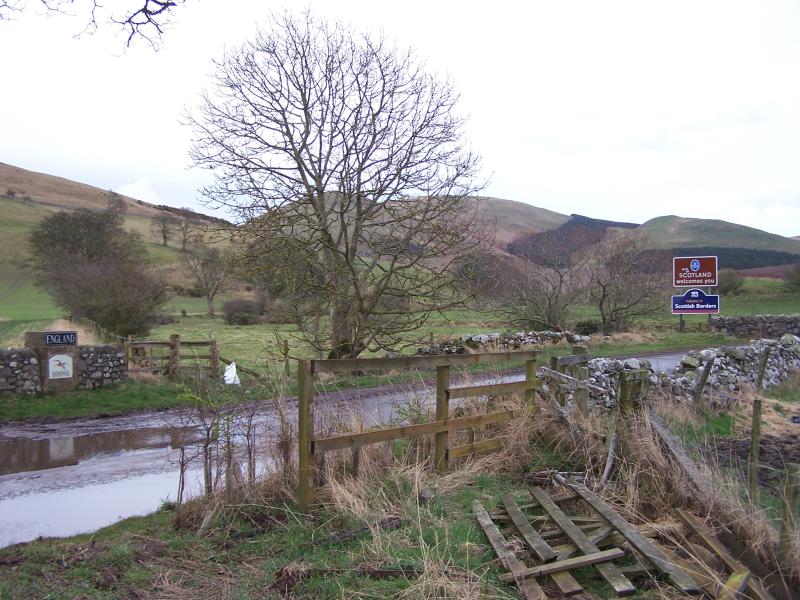 Beyond this point, the border heads out into the Cheviot hills, and does not cross another road until the A68 at Carter Bar, a considerable distance away. I (and my very understanding and helpful navigator)  decided to leave the rest of the border for another day. If you want to follow our route, I would not leave it too long if I were you; otherwise you might find that the minor roads have all been dug up, and the major ones have checkpoints. You might want to wait for better weather than we had on Saturday, though.

Out on the border: part 1. / Hugh's Geophysical Blog by blogadmin is licensed under a Creative Commons Attribution CC BY 3.0