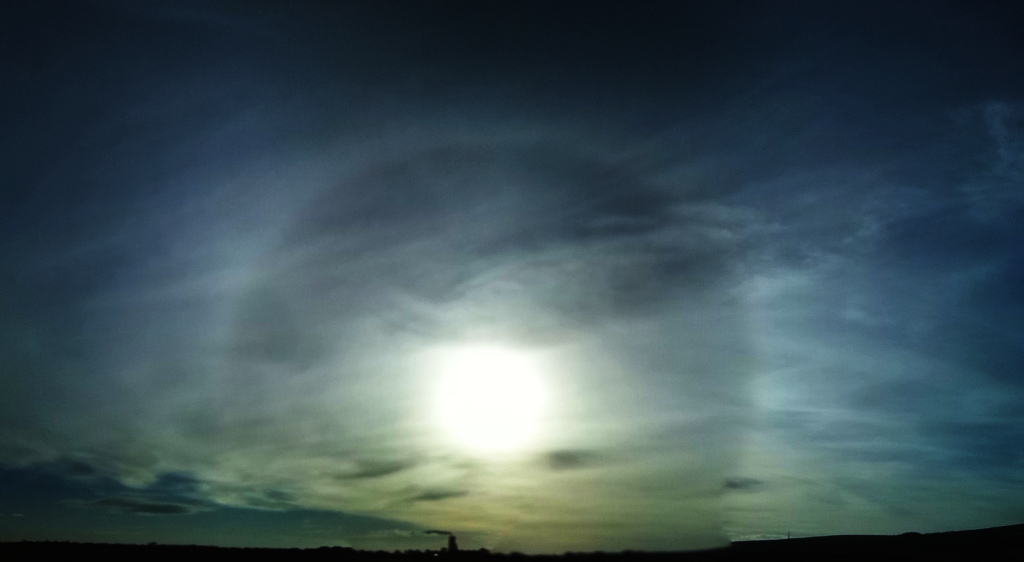 I spotted this nice example of a 22° halo on Sunday morning (5 Oct). I was driving along the A1 at the time, so I screeched to a halt at the first place I could park and grabbed a photograph. Not a very good photograph, unfortunately: it is taken with my mobile phone which doesn’t have a viewfinder. I find it rather hard to see the screen while staring into the Sun. I found out afterwards that the auto-focus had failed to focus very well.

The final picture is actually four photos stitched together with Hugin. The 22° halo is 22° from the Sun to the halo, so it is 44° across, meaning that you can’t get all of it into a single shot.

Halo phenomena are formed by sunlight passing through ice crystals, which are usually shaped like hexagonal prisms. The fact that there was a 22° halo rather than sundogs or some of the other possible halos shows that the crystals had no preferred orientation and were neither long needles nor flat plates. As usual, the best web site to read up on this sort of things is the Atmospheric Optics site.

The 22° halo often occurs shortly before the weather gets considerably worse. In this case it was raining heavily when I got up on Monday morning.