Summer seems to have arrived, and about time too. The East Lothian sky yesterday was full of textbook  cumulus clouds as the Sun warmed up the ground, setting off convection cells. (Later in the afternoon the convection was enthusiastic enough to chase me in out of the garden.)  On my way home from bellringing I was moved to take the scenic route and to stop for a look at the view. 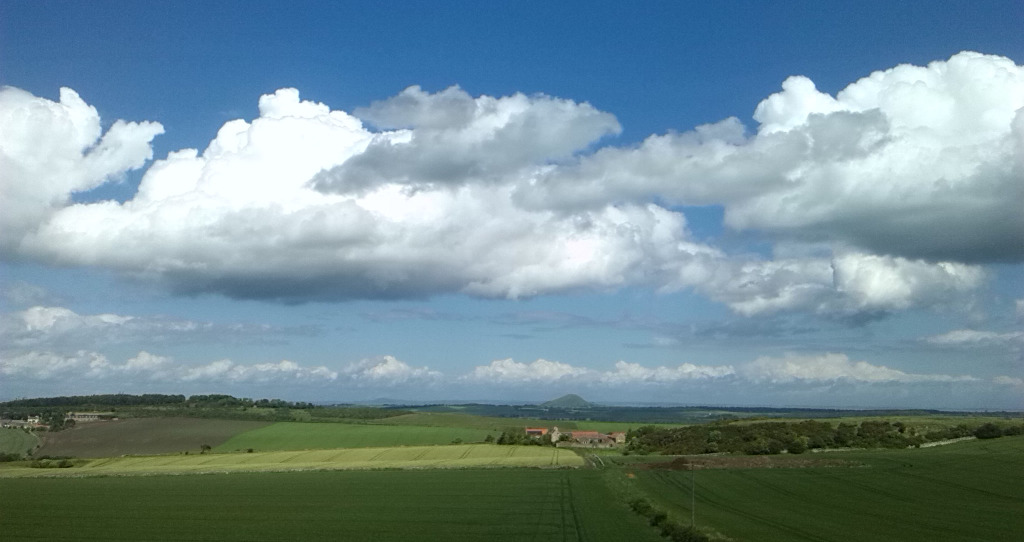 This picture is looking North; the conical hill in the centre distance is North Berwick Law, one of the Central Belt’s many volcanic features. The picture is taken from a point just next to another one: Traprain Law.  I hope to run an undergraduate project to measure the gravitational field of some of these volcanic hills, so poked about a bit to get a better look at this one.

Traprain Law is usually described in geology books as a laccolith: a big blob of igneous rock (phonolite) that was intruded between layers of the surrounding rocks. These rocks are much softer than the phonolite and have subsequently been eroded away to leave the hill standing proud of the surrounding landscape. Igneous petrology is a subject about which I know almost nothing, so I don’t claim to know what phonolite is, or what distinguishes it from other igneous rocks. But it is clearly hard enough for it to be worth quarrying for roadstone as there is a sizeable quarry at the East end of the hill.

Quarrying was only stopped as a result of public outcry about the damage being done to the landscape and the archaeology; I’m not sure exactly when the quarry was abandoned. It was certainly active in the 1930s. Questions were being asked about it in the House of Lords in the 1950s and 1960s and it still looks quite active in this 1972 aerial photo. I wanted to get a close look at the rock face, but there is a cliff and/or a dense jungle of gorse bushes between the road and the quarry floor; I think I shall have to return when I am wearing some more thorn-resistant clothes.

Intrusions and convections / Hugh's Geophysical Blog by blogadmin is licensed under a Creative Commons Attribution CC BY 3.0