OER14, the fifth annual UK OER (Open Educational Resources) conference, was held in the Centre for Life in Newcastle on 28th & 29th April. The conference themes this year focussed around OER as a catalyst for building communities of open practice which, given recent criticism of the OER movement for over-emphasis on autonomous learning and lack of emphasis on teaching practice (for example, see Knox 2013), was an encouraging move towards addressing areas such as “academic practice, development and pedagogy” and “students as users and co-creators”. 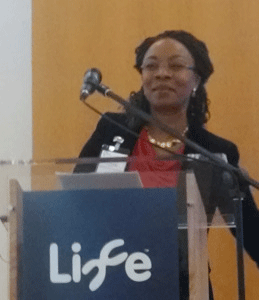 Catherine Ngugi, from the OER Africa project, provided the conference’s opening keynote, discussing the importance of open licensing within the African context. Copyright, she argued, has driven a didactic approach to classroom teaching in Africa by making resources, such as textbooks, unaffordable and therefore creating an over-reliance on lecture-style teaching. Many OER Africa initiatives are relatively low-tech; open textbooks printed on-demand are often most appropriate in areas with problematic access to digital resources. Rather, the important innovation is that both students and teachers have affordable access to educational resources. Teachers can be actively and collaboratively involved in curriculum development and the preparation of open textbooks by remixing existing resources. In the classroom itself, as Neil Butcher from OER Africa has blogged, OERs need to be used within a transformed teaching context to be effective; providing student access to educational resources can facilitate this change by freeing up teacher contact time for more meaningful interactions. Moving to a licensing culture which encourages sharing, Catherine argued, encourages a collaborative approach to the development and sharing of knowledge.

Here in the UK, Graham Gibbs from Huddersfield University has been developing an online distance MSc based on open resources, with the aim of converting a face-to-face curriculum to one based on online open resources. He noted that teaching staff are often keener to create their own resources than to reuse, repurpose and remix existing resources. Maybe it’s because searching for, and assessing the quality of, open resources is a time-consuming exercise in itself. Building a course from open resources – finding relevant high quality resources and deciding on when to plug gaps yourself – is a skill which teachers need to develop in order to become discerning users and creators of OERs. Taking this a step further Namrata Rao of Liverpool Hope University described a study evaluating a research methods course which aimed not only to help students locate relevant OERs for themselves, but also to encourage student co-creation of a study guide repository. This project is about not only developing web literacies for teachers, but also for students. The co-creation of OERs is built into the curriculum of the course – not only exposing students to a wider range of perspectives on research methods, but also seeking to develop the skill of finding reliable information on the web. In many ways this approach is based on Deimann and Farrow’s (2013) philosophical notion of bildung, or self-cultivation, which they describe in their paper “rethinking OER and their use”. This might be characterised as the start of a shift from passive focus on Open Educational Resources to a more active focus on Open Educational Practice (OEP).

A different approach to developing web and digital literacies was described by Peter Bryant, Antony Climbs and Monica Lazio from the University of Greenwich. Based on the observation that failure can make teachers fearful of technology, and therefore discourage further innovation, they described an approach which highlights the playful side innovation with technology. Greenwich Connect is a vision for innovative learning across the institution which emphasises ‘people’ rather than ‘platforms’ and ‘sharing’ rather than ‘distributing’. It is about bridging the disconnects between the way students live their lives against staff preconceptions and the speed at which students change technology against institutional ability to support it. Facilitated by social media (YouTube, Flickr, SoundCloud, etc.) they aim to help staff and students build connections and engage with the open community both inside and outside the institution. A key change in attitude they were interested in was to move away from thinking about ‘wrapping’ technology around the curriculum to making it a core part of the curriculum.

What Bryant et al did find however was a nervousness amongst academics about giving too much control to students within this open community of practice. Clearly there are ethical issues to consider when asking students create and share resource, and it was the “the ethics of student digital publication” that Antonio Martinez-Arboleda discussed. Antonio has introduced an assessment for final year BA students in Spanish at the University of Leeds which involves the production, and optional publishing, of student-created OERs. Students were required to produce audio documentaries about Spanish migration based on the OpenLIVES resource, the content of which is available via the HumBox repository. The ‘ethics’ discussed here were not only about the practicalities of asking students to openly publish their assessed work (this is currently optional in his course) but also about implicitly promoting ethical approaches to education to students. Students have the option to add their own OER to HumBox, but Antonio is clear that this is not intended to create a two-tier class – this decision is only made after the marking has taken place (last year 3 out 8 students chose to publish their work). These developments have implications for both curriculum design and research – Antonio has already published a paper based on this work, “Liberation in openLIVES Critical Pedagogy”, and plans more in the future.

On a different, but equally important theme Rob Farrow from the Open University, addressed the question of researching and assessing the global impact of OERs. The OER Research Hub is a project run out of the Open University which seeks to develop a better picture of the global impact of OER – does the rhetoric and enthusiasm for OER translate into tangible benefits? The project has developed a data model to record research findings against a number of hypotheses. Their OER Impact Map presents this data visually as thematic maps, highlighting where hypotheses are supported or not. The project, whose funding ends next year, seeks to leave a ‘sourcing’ site where users can continue to add data and rate items for usefulness. What’s interesting about this project is that it not only asks us to think about evidencing the value of OER but also asks us to get actively involved by: contributing data; rating data; using data; and learning about how to research (they have developed an open research course in the P2PU school of open). 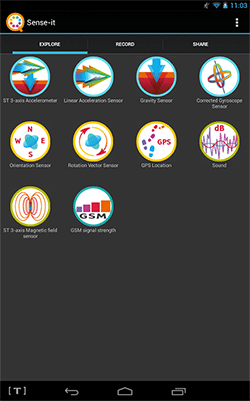 A screenshot of the Sense-it android app.

OER14 was an intensive two days of parallel sessions. It addressed OER in its broadest context; it’s not just about the large-scale headline-grabbing initiatives, it’s also about many activities that are achievable on a much smaller, course-based level. What I took away from this event is that OER is not only about enabling access to knowledge – from an individual nugget to an institutional corpus – but for effective learning to take place active engagement with communities is also required, be it face-to-face classrooms, or networked communities facilitated by social media. Mike Sharples, from the Open University, really brought this into focus, discussing the move from OER to open communities of practice. He used projects like iSpot (an open community for recording observations from nature) and the Sense-it mobile app, developed as part of the nQuire project, as examples of sharing within an open knowledge construction system. He calls these ‘citizen inquiry platforms’ which promote learning for life in ‘productive learning environments’; developing a learner’s role within a supported community of learners. To move from OER to OEP we need more than just truly open resources, but also viable and sustainable open communities.

OER15 will be in held in Wales and I hope that some of us will be able to get the chance to share a few of the smaller scale, but nonetheless exciting, open education related initiatives already taking place at the University of Edinburgh, for example: our new Open Education Edinburgh YouTube channel; student created open resources in programmes like the MSc Digital Education; and many more which I am sure are in the pipeline.

OER 14 / Educational Design and Engagement by EDE is licensed under a Creative Commons Attribution CC BY 3.0

The seduction of coding in a data-driven society