In the Sounding Out the River project, we had dual aims of showing (i) how to monitor bedload transport during floods using geophones and also (ii) the development of a low cost data collection and telemetry system.

This latter component has seen us develop three pieces of technology.

In this post, we discuss the BatMan which is a board we have built for power management – primarily for the telemetry box.

The technical development has been carried out by Calum Cuthill who is a PDRA on the NERC funded Sounding Out the River Project funded as part of the Digital Environment Program.

We are targeting bedload transport during storms in the autumn and winter in Scotland. This means low levels of sunlight, temperatures around and below 0 degrees and potential snow cover. Also, we have two different power needs. The data logger requires continuous power, where as the telemetry requires short busts of higher power. The environment can be very windy so equipment needs to be well tethered to avoid damage.

Originally, we were looking to use the Raspberry Shake which is an off the shelf, low cost instrument which uses a Raspberry Pi for logging and telemetry (~£1k). However, we found two challenges with this instrument. Firstly, the sampling rate was limited to 100 samples per second which means we could only resolve a 50Hz signal (we wanted 100 Hz). Secondly, it was power hungry…

We decided these limitations were too great and switched to an off the shelf solution of the Digos DataCube logger which was much less power hungry and could record at the rates we needed, albeit a more expensive solution (~£3k per instrument and logger) which does not include telemetry by default.

In a later post we will talk about the development of our low cost Geoduino Seismic ADC board which resolves some of the cost challenges but here we talk about how we powered the DataCube and telemetry box.

Originally, we had anticipated using lead acid batteries (basically like a car battery) which can be recharged using a solar panel but are heavy. However, reliable solar is challenging during the Scottish winter and getting a very large car battery is both very expensive and very heavy to install. Further the solar panel (~£100/panel) and solar charge controller (~£150 each) add further costs and are bulky to carry. 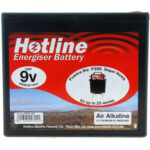 We decided on a different solution. Air alkaline batteries are commonly used for powering things like electric fences for farmland – and are consequently very cheap. They have a high specific energy density (hold a lot of power for not a lot of weight). The downsides are that they are not rechargeable (although they are easily recyclable and don’t contain nasties) and need air to function properly. The other limitation is that a typical 165Ah battery (weighing just over 3kg, and costing ~£40) can only provide a maximum current of ~50mA at typically 8V without killing the battery. 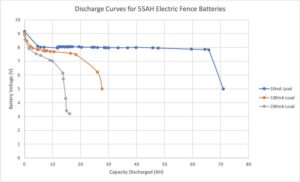 The Digos DataCube has sufficiently low power consumption that this will power it for ~5 months :-). The use of a single electric fence battery for this is great because it makes installation very easy.

Powering the telemetry is harder… as this briefly requires a current that kills the battery after a few days… Our solution is to trickle charge a small lead acid cell and then power the telemetry using the lead acid cell. This means we still get the advantage of the high power storage in the electric fence battery, but without the need to draw a high current from it! 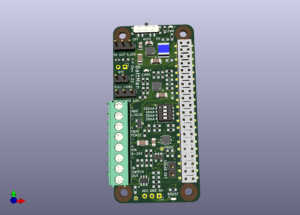 To enable this, we have printed a circuit board which we call the BattMan (Battery Management). This board manages the trickle charging of the lead acid battery. We chose lead acid because it charges better at low temperatures than a lithium ion cell. We designed the BattMan so that it would work well with a Witty Pi Mini 3, which is an off the shelf solution of scheduling the turning on and off of a Raspberry Pi. We are using a Pi Zero to then do the telemetry as it uses less power than the standard Raspberry Pi but still has the functionality to make telemetry easy.

Rather than run off one electric fence battery, we decided to use two so that if anything went wrong with the telemetry, we dont risk killing the battery running the logger as they are independent – this just adds a but of robustness.

We also added a couple of other features to the BattMan.

We have just produced a version 2 of the board, printing it in China rather than the UK which has reduced the cost significantly.

We have added an MCP3008 ADC to the board which allows us to convert the analogue voltages on the batteries and/or solar panel to a digital signal for telemetering out. This was chosen because Adafruit have written a convenient Python library for the Pi so that we can access the values over the I2C communication.

** Currently this new functionality has not been tested**

I really like the use of the electric fence batteries for powering remote instrumentation reliably. Provided the continuous current required is sufficiently low, they provide a light weight, cheap and reliable solution. I know people working on volcanos and remote locations who regularly have to carry in a heavy car battery to switch with the drained one and the carry the dead one out. If you have a maintenance run once or twice a year it is very little effort to carry in the 3kg electric fence battery. For the cost of a solar panel, charge controller and lead acid cell, you can probably buy ~8 electric fence batteries which would last us ~4 year for the logger.

Getting these boards printed and build in the UK was not cheap (~£200/board). We are currently trialing getting them printed and built in China which will reduce this cost significantly (~£30/board).

I am not sure whether this will prove the best solution when working in developing countries as I don’t yet know the availability of electric fence batteries there – but there may well be good off grid solutions that we can just work with. For example, in Nepal – they are not limited by the availability of solar power that there is over a dreich Scottish winter week.

TECH DEVELOPMENT: The BattMan (Battery Management) / Mark Naylor’s Blog by blogadmin is licensed under a Creative Commons Attribution CC BY 3.0