The University of Edinburgh runs many field trips. Moreover, I mean lots. We have students exploring the remote Himalayas, looking for lost species in the Amazon basin or strolling along the wide banks of the Tay, here in Scotland. The academic staff supporting them are as brilliant as the places examined. I, as a student of the university had the great fortune to take part in these field trips as well. 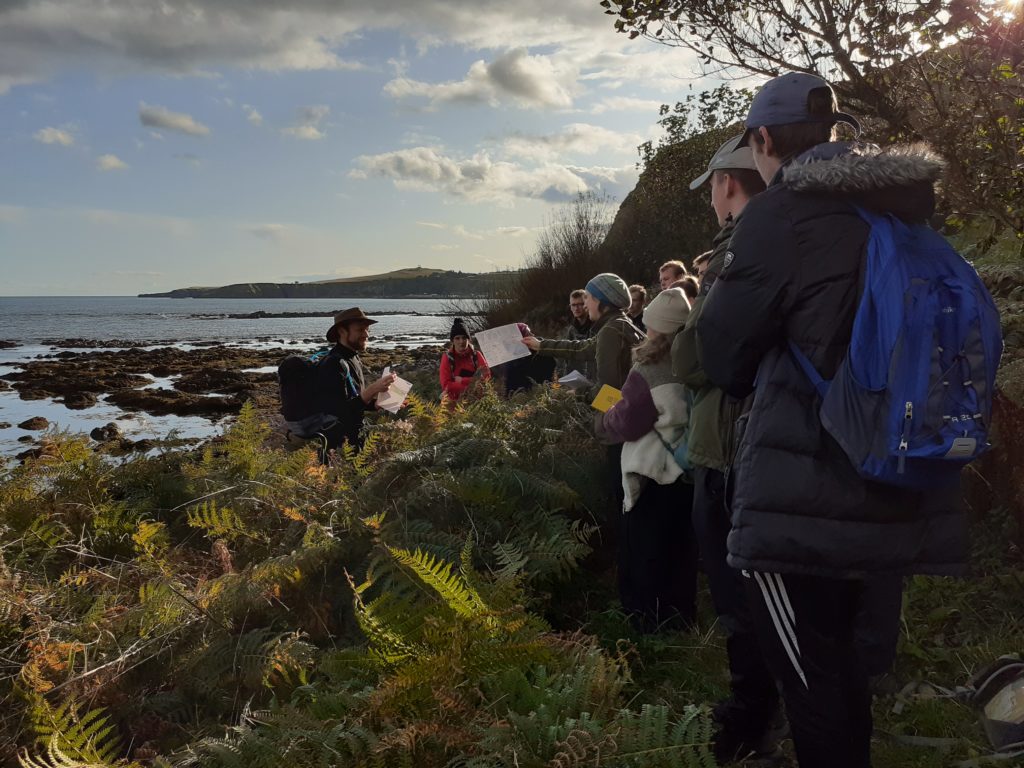 In October with a wider group, I visited a very special outcrop here in Scotland: The ‘Great’ Highland Boundary Fault at Stonehaven. Dr. Stuart Gilfillan and PhD student Chris Holdsworth led the group.
We started early at 8 am and drove up to Aberdeenshire. We stopped at one of the teahouses. Teahouses along with driving stops are wonderful in Angus as each of them has its own character. Much better than the commercial disasters down in England. They sell a wonderful range of cakes and teas along with local souvenirs. They are great little islands of rest in-between the field trips.
By 10.30 am we managed to get to the site. It was a nice car park located next to the Stonehaven Golf Club. When one walks in that area, one must be careful as abandoned golf balls can hide anywhere in the grass. The players who frequent those clubs think they are good at golf. They are not.
We started our geological journey by traversing the Den of Cowie and looking out onto the Skatie Shore. The section was made of a mildly metamorphosed sedimentary sequence mostly made up of turbidites lightly folded and crenulated by tectonic forces. These sequences belong to the Dalradian group making up the Southern Highlands. The bay was cross cut by several faults as well, which suggests brittle deformation with plastic deformation due to the small folds present in a few sequences. Some minor dykes cut through the rocks as well. 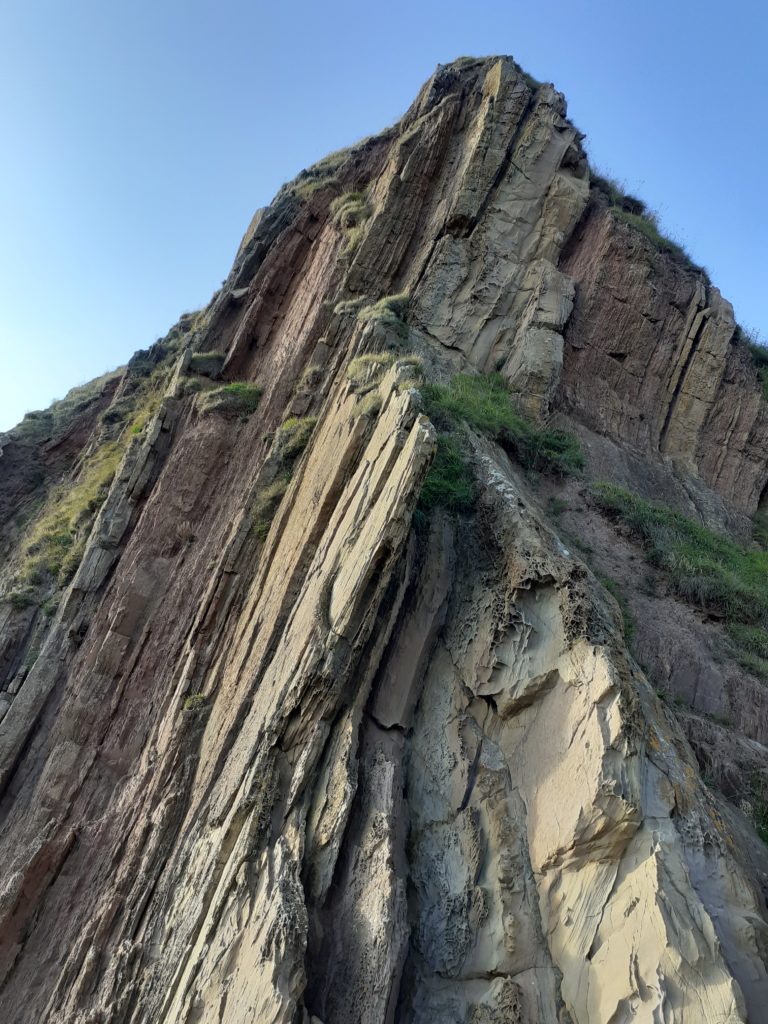 We walked along the bay to Garron Point. Our footsteps took across silver sands and dolphins playing in the bay. We stopped at a few extra outcrops. As we moved to the other side of the bay, in the middle, we encountered a few conglomerate rich sandstones.
This was the point where the geology became complicated and very interesting! Suddenly we had a massive change in the geology as orderly sequences gave away to crushed rock. We have found the Highland Boundary Fault with its hiding Ophiolite. We had a tumbled mess of harzburgite, basalt, pillow lavas, shales, cherts and jasper. We found plenty of Serpentine bearing rocks cross cut with quartz veins. All this is part of a massive fault line that runs from Stonehaven across the country down to the Clyde.
After the initial survey, we climbed up the fault and arrived into a second bay, much smaller than the previous one. Beyond it, I glimpsed a bit of Stonehaven, the golf course and more bays separated by the fault. Where the rock was soft, the sea carved itself towards the land, where bits of the fault were present; they stood out of the water like guards at a castle. 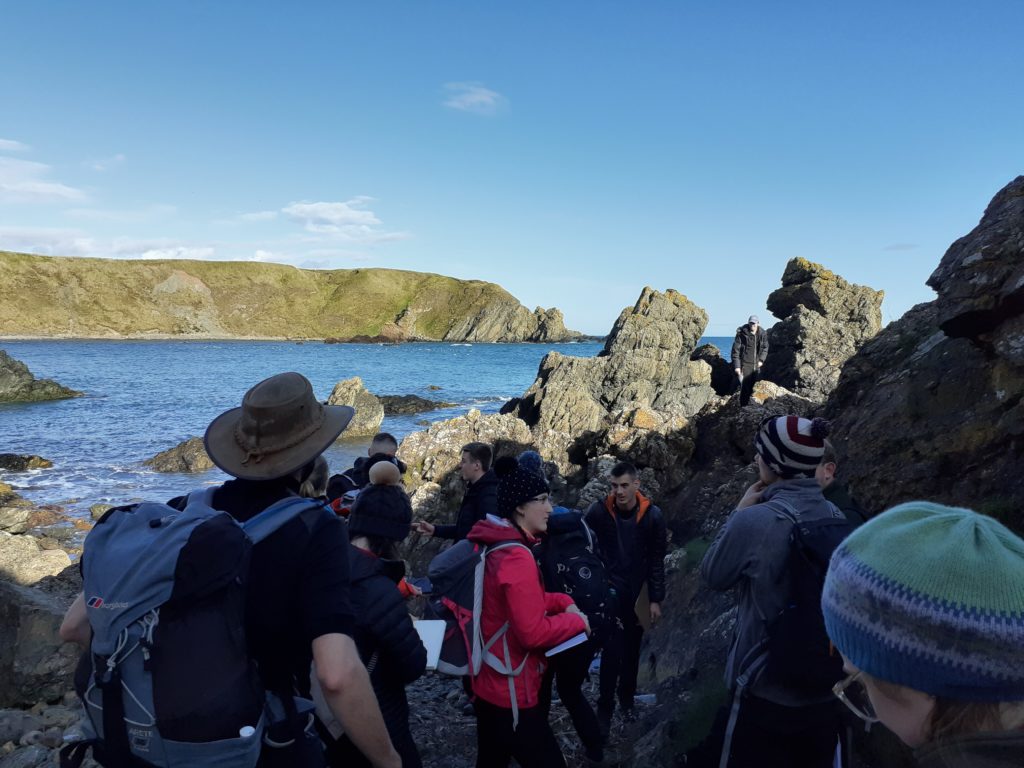 The little bay presented challenges of its own. We could see multiple layers of red cherts and black shales, yet basalt was interspaced in-between, cut by basic dykes. We could not find the expected pillow lavas. This is an odd ophiolite.
We scrambled up and down the cliffs and walked along the old golf course, following the fault line as it cut through Craigeven Bay. On our journey, we encountered conglomerates, where Stuart told us that one of the oldest fossils in the UK was found in the area. The fossil in question was a millipede being 428 million years old. 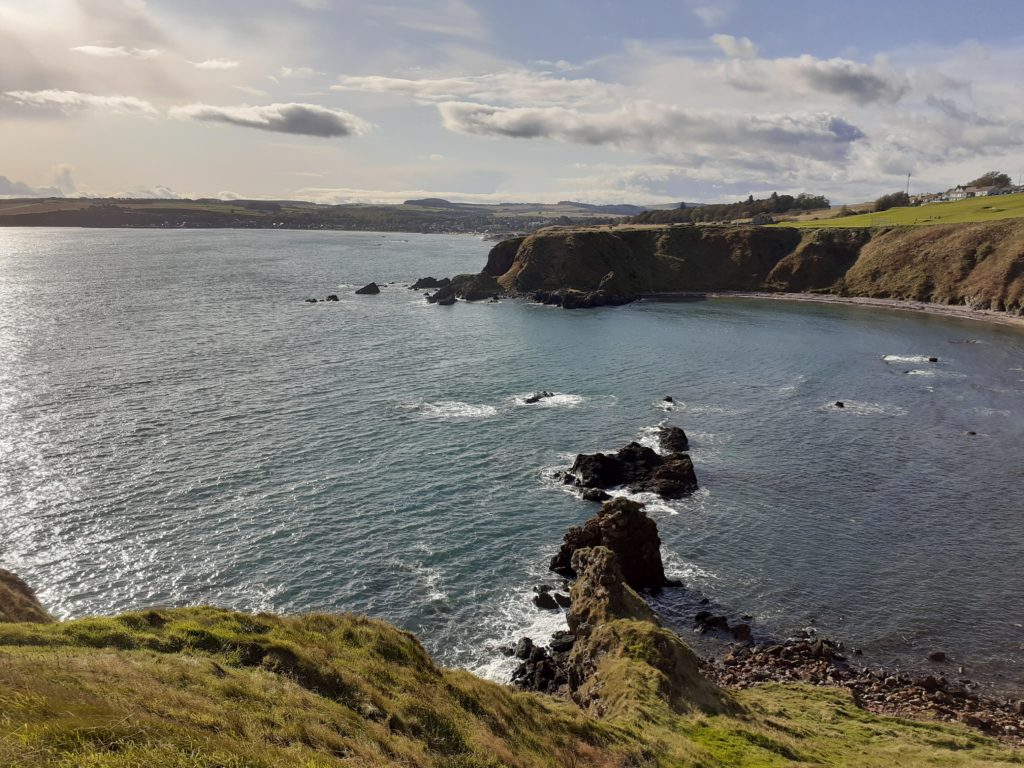 The fault running across the bay

We walked through the bay until we reached the Old Kirk Shore. We looked at the folds there than moved to the last section of our trip. Looking back we could see the fault, straight as a ruler cutting across the coast. We even finally saw the structure of the ophiolite. At the end of the bay we came across a strange formation:
We had Silurian sandstones perch high up like a grand cathedral. They were made of different layers several meters across. The structure itself was deposited by ancient rivers.
In the distance, we had the ghostly shape of Dunnottar Castle on top of the mighty conglomerate cliffs of Kincardineshire. The landscape was so familiar yet alien. Scenes from the next Star Wars movie need to be filmed there! With my mind’s eye, I could see a Star Destroyer hanging high up in the blue sky, TIE-fighters running on the surface of the water and landing craft delivering stormtroopers onto the shore as soldiers from the Rebel Alliance desperately try to push them back into the sea.
The final stop was very close to Cowie. We looked at the local lavas and discussed how volcanism played a role in the past of Stonehaven.
After the great daytrip, we drove back to Edinburgh. 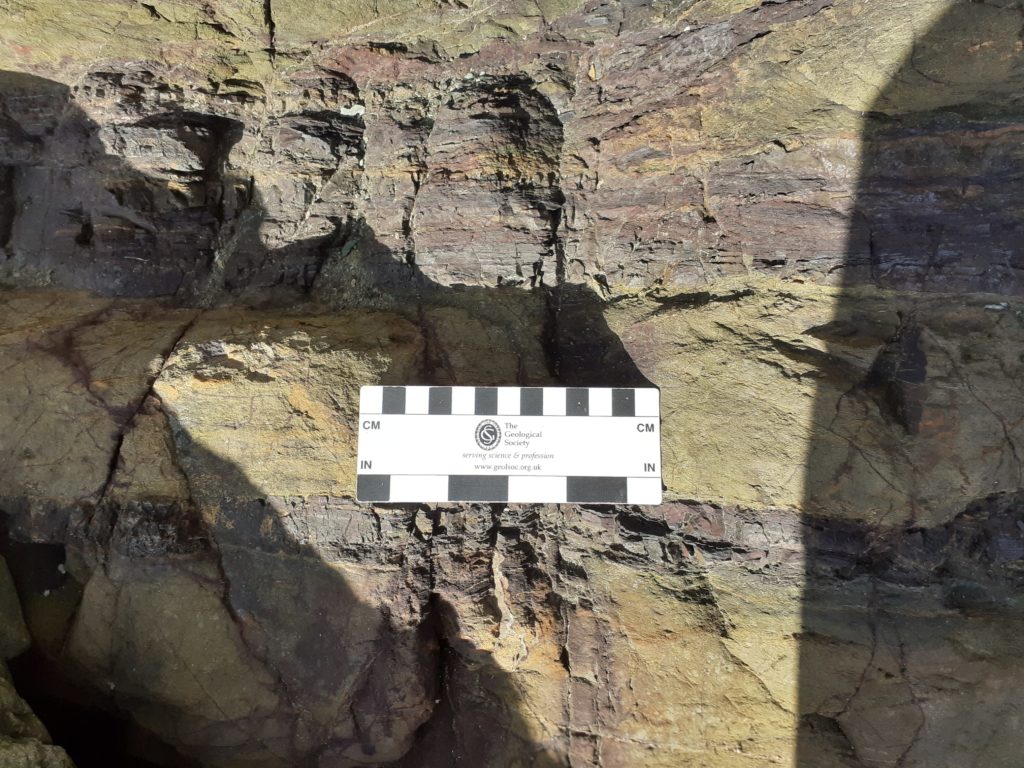 Along with geology, I am a very keen journalist. Along with being on the trip, I interviewed Stuart and Chris for a local paper called the Courier for Stonehaven and Montrose. Stuart and Chris gave their permission to have the interview included in this blog. Stuart and Chris are interesting people, so I hope you will enjoy reading this as much as I enjoyed interviewing them:

Stuart is a regular professor at the university; however, he has tons of experience under his belt. He worked in Canada on Carbon Capture and Research projects. He travelled around the world from America to Australia on a great range of field research. He teaches a wide range of courses at the university from rock description to first year students to the geological history of the British Isles to 4th year students. I asked him a few questions regarding why he chose the site and what can we learnt about the geology of Scotland through it:

Why did you choose the sites in Stonehaven?

“I chose to visit Stonehaven for this one day trip as it provides a unique set of rocks that span the most important event in the geological history of the British isles – the Caledonian Orogeny, where Scotland joined together with England, about 450 million years ago. The rocks range from sediment deposited in the deep sea floor in a former Ocean that separated Scotland and England to the remnants of a volcanic island and the vast amounts of sediment that was eroded from the Himalayan sized mountains that were formed by this large continental collision. This is impressive in itself, but it is even better that you can see all of this in a 5km walk along the coast, without the need to drive from each rock formation.” 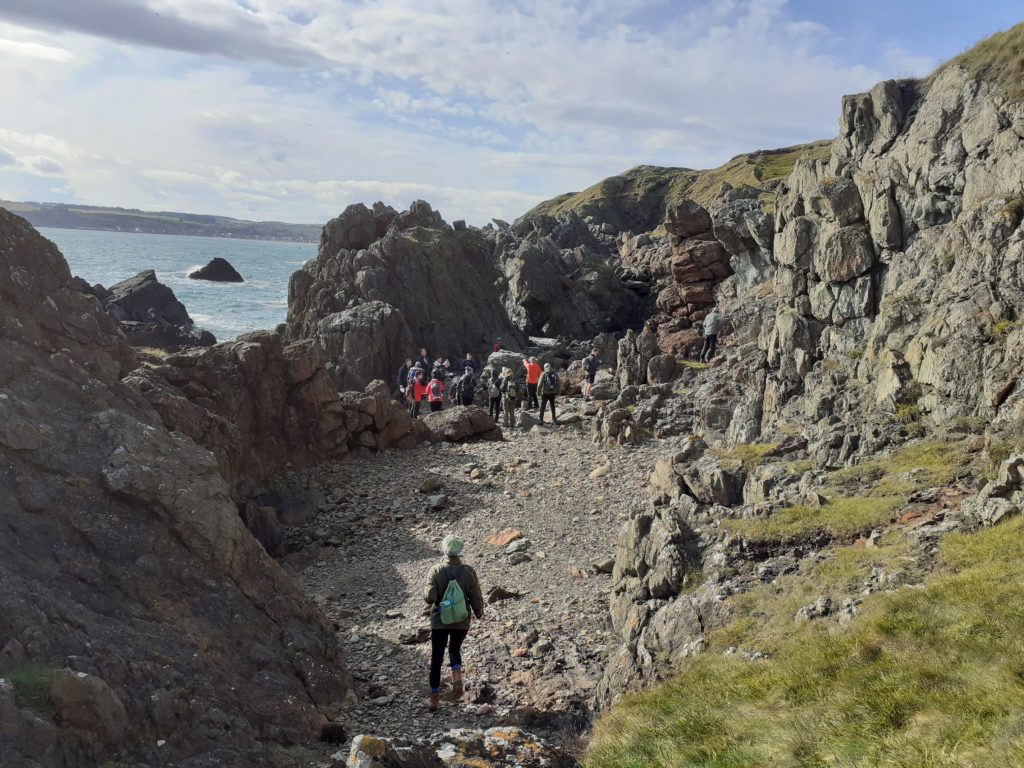 What other geological sites should the people of Angus and the Mearns visit?

“ I would recommend the coast line south from the town of Stonehaven to Dunnottar Castle, where you can see the vast boulder beds of sediment laid down during the erosion of the highland mountains after the Caledonian Orogeny. If these were not impressive enough, they have also been tilted to lie vertically by tectonic actions after they were deposited.”
“I would also recommend the walk along the coast north of Abroath to see the intriguing rock formations of the Old Red Sandstone, laid down when Scotland was 20 degrees south of the equator in a hot and arid climate. The small coves and caves that have formed from the erosion of these rocks by the sea are very impressive.” 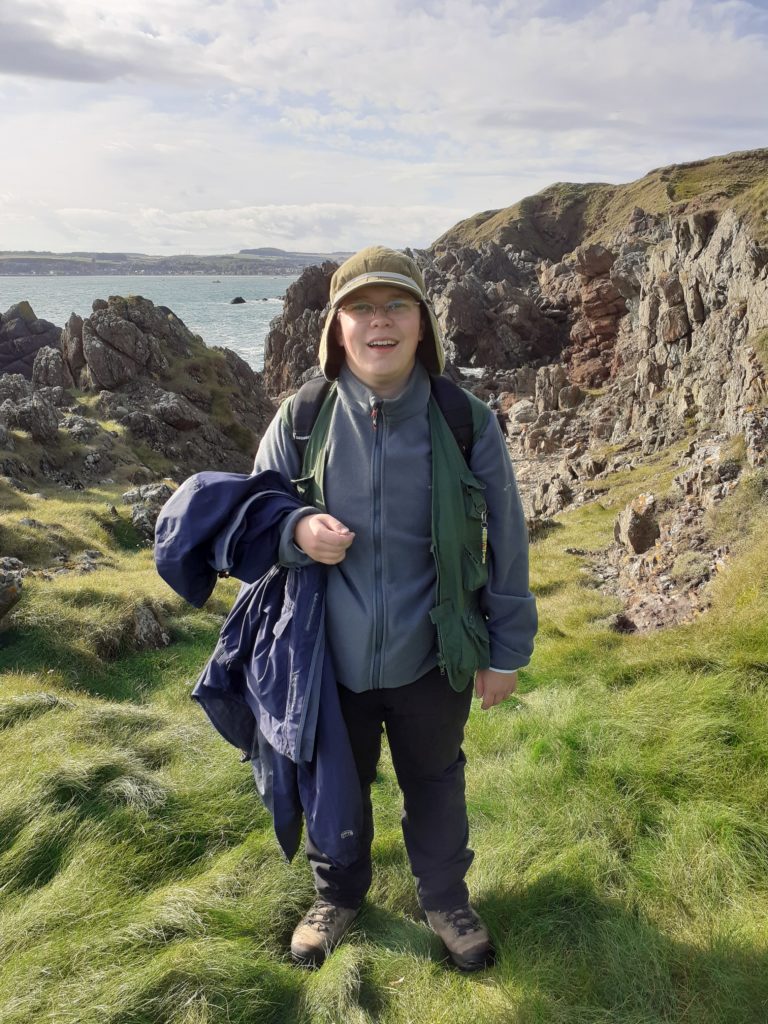 What is the geological history of Angus?
“This is summed up in the description of the rocks at Stonehaven but I think that the influence of the geology on the landscape would be of greater interest to readers, as outlined below:
The geology controls the present day Angus landscape, which is separated into remote highlands to the west and lower lying more populated agricultural land to the east. The Highlands bounding Strathmore to the north-west are composed of metamorphic rocks which are more resistant to weathering than the old red sandstones which form the lower lying ground to the east. These areas are separated by the Highland Boundary Fault, a great fracture running south-westwards right across Scotland from Stonehaven to the Clyde at Helensburgh.”

Does the University of Edinburgh send people to visit Angus & Kincardineshire often?
“Unfortunately not to my knowledge, as it is a little far from Edinburgh for a short day trip. However, I know that the Universities of Aberdeen and Glasgow also visit the rocks north of Stonehaven.” 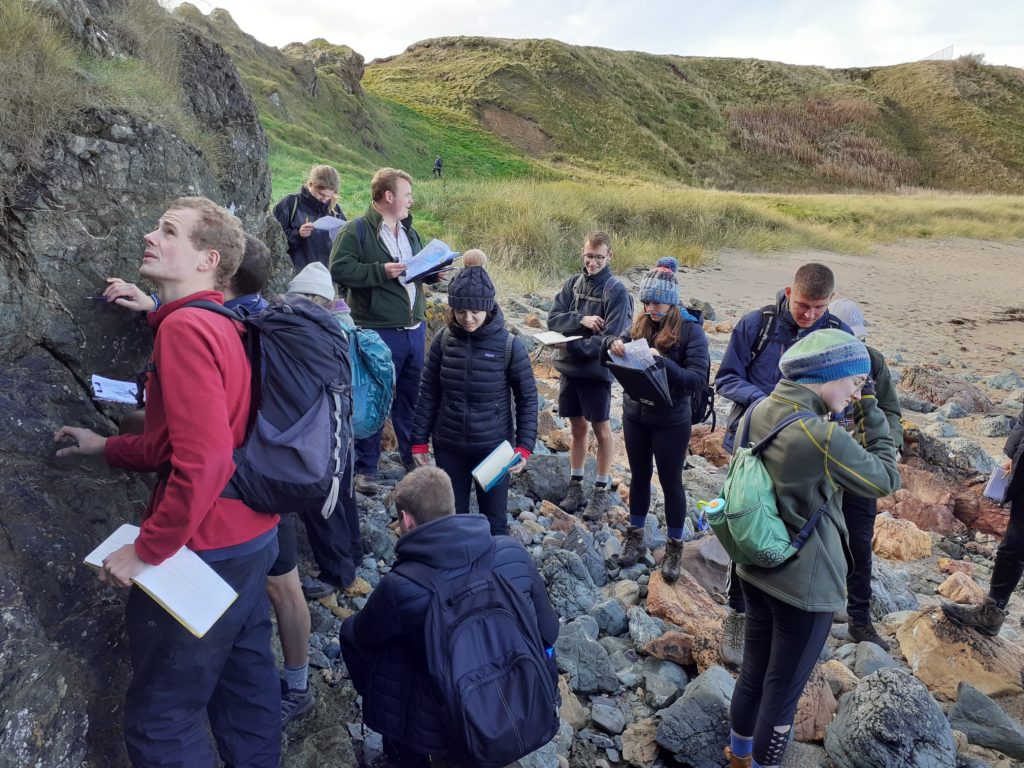 Chris Holdsworth is a PhD student at the university, studying CO2 capture & storage. He gave me an overview of the field trip:

“Stonehaven is a fantastic place to train your skills as a geologist because of the wide range of rock types and major tectonic features on display within a relatively small distance along the coast. It also gives you an insight into the diverse and extensive history of the British Isles and an appreciation of the scale of geological time. It’s a great day out and highlights why Scotland is such as special place to learn about geology.” 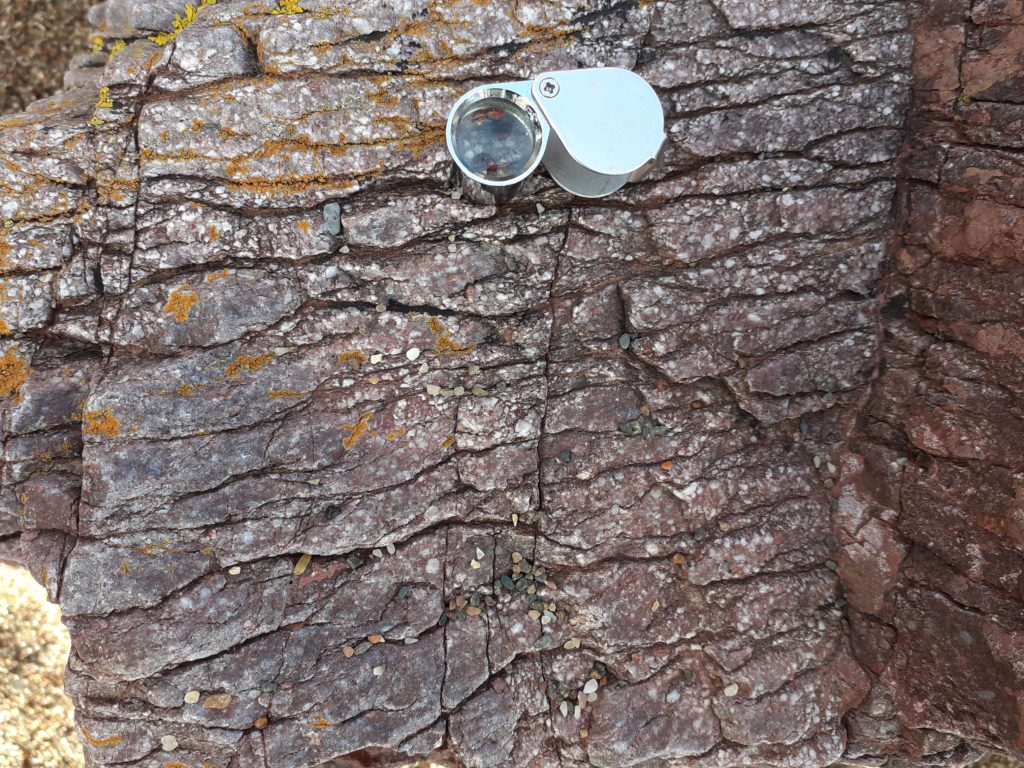 My opinion on the area as given to the newspaper:

“I loved visiting Stonehaven. I lived in Angus since 2011, however it is always great to approach the area from a geological perspective. I invite everybody to explore the east coast and its rich geological heritage. I got into geology because of Mr Ewing, my geology and geography teacher at Arbroath High School. I have a lot to thank him! It would be great if he could join the trips in the future as well.” 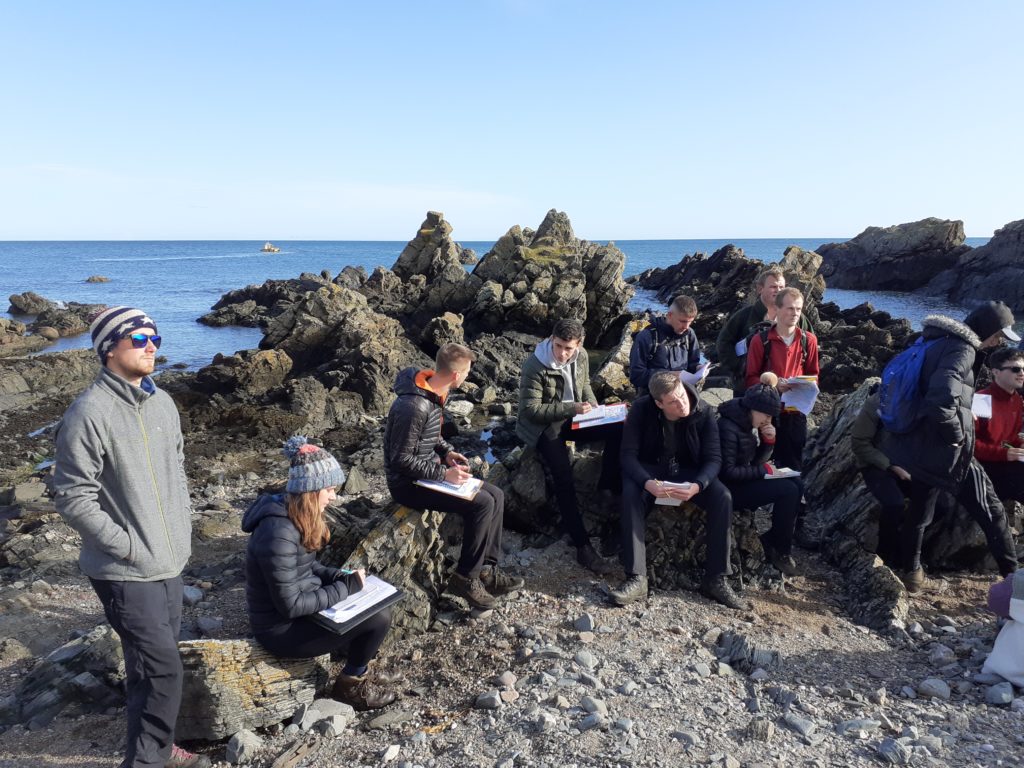 Chris Holdsworth on the very left

My special thanks go to Prof. Stuart Gilfillan, PhD student Chris Holdsworth and the wider group of students who made the trip so enjoyable and educational! Stuart did a great job with the field handout, without it, I would not have been able to write this blog. God bless the inventor of the Ordnance Survey maps! 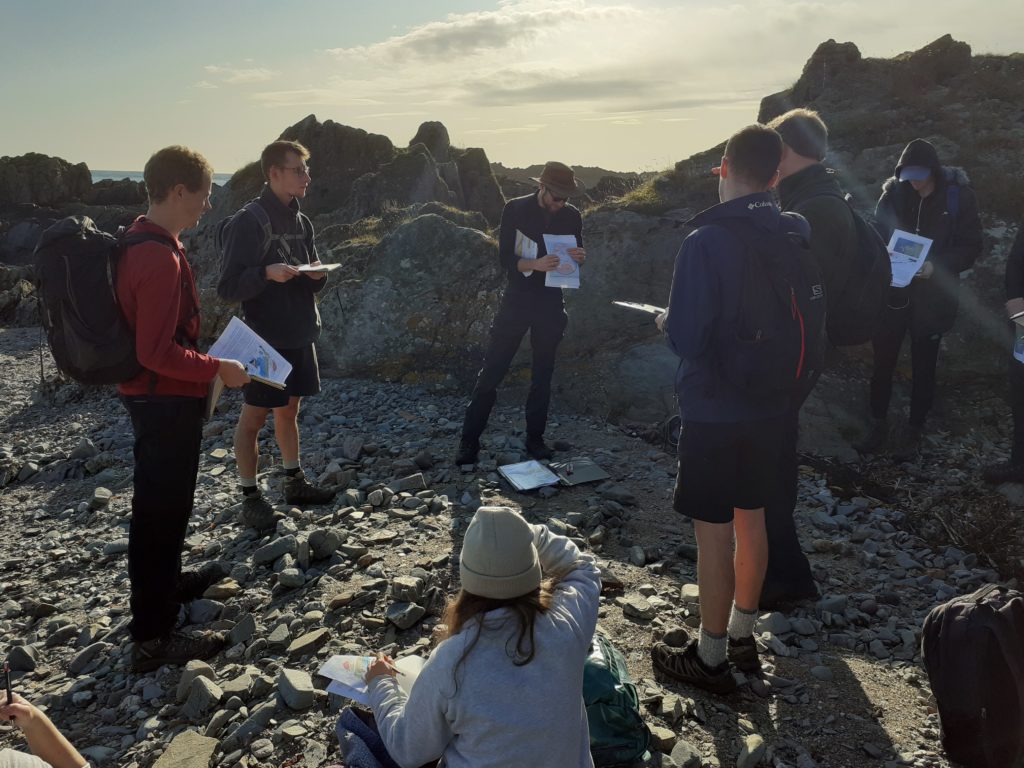 A spirited visit to the Highland Boundary Fault as it runs into the North Sea at Stonehaven / Working & Learning at the University of Edinburgh - Student Ambassador, Geologist, Red Lichtie by blogadmin is licensed under a Creative Commons Attribution CC BY 3.0

Leave a reply to hdeak