Dr Jackie Kendrick is a volcanologist and a field geologist at the University of Liverpool. She studies the mechanics of volcanoes combining laboratory data with evidence from the field. She is the person to go to if you have a question about volcanoes. It was great that the university got a woman speaker.
Jackie in her talk went over her work as a volcanologist on how she uses scientific data and field work to understand the behaviour of volcanoes.
As she explained, volcanoes are dynamic systems in quite a big contrast to how we traditionally understood them, as rigid structures where some hot stuff flows through.

Her research method works the following way: She observes how modern volcanoes work. She goes to modern sites and takes data from local monitoring sites. She monitors gas emissions, looks at tremors and compiles the data. Then she simulates the volcano in a computer using the parameters gathered from the field. She uses high pressure experiments by recreating the conditions under a volcano. The video she showed was very spectacular. She put the rocks from the volcano under spinning tubes, which spun so fast that the rock started glowing and turned back into lava! Then she let it cool and compared the ‘new’ rocks with the old rocks from the field. She did that by slicing up the rock, thin sectioning it than putting it under a petrological microscope. She was interested in seeing how gas bubbles move through the molten rock and how cooling rock deforms while still under pressure.

Just for fun here is a team of scientist ‘creating’ lava in the lab than pouring it onto ice.

Her work is really important to understand volcanoes. I understood several nice nuggets of information about the volcanoes of South America: How lava moves is greatly determined by how easily gas can move around the lava and escape. This in turn is determined by the structure of the lava which can change through the stress applied onto it through shear thinning. This decreases viscosity allowing bubbles to move through easily. Cyclic loading therefore degrades the rocks. In turn this has a great effect on how and when a volcano erupts. A lot of the shear stress is caused by seismic earthquakes which are caused by magma moving underground. The entire system exists in a feedback loop.

In turn this connects back to the research of Dr. Andrew Bell, who thinks that large scale earthquakes independent of the volcano play a role in when a volcano erupts. Isn’t interconnected science fun? 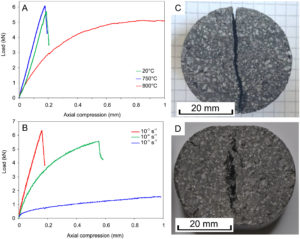 Some of the cores from the high pressure experiments

I really enjoyed listening to Jackie’s talk. She provided me with two key points:

In the field of geosciences, it is important to integrate field work with lab work. There are too many purists out there who see their own field as the most important thing in the universe. When I was in the second year of my education and we visited Assynt Geopark a certain volcanologist made the rather strange remark: “oh, the GPG students and their instructors are a bunch of gardeners”. I am from the Hungarian minority of Romania, so I am used to derogatory terms flying around. I think he was joking, but his problem highlights one of the key points in the sciences: there is a lot of suspicion

between the wide range of subjects. Jackie’s work was the exact opposite of that mindset. She combined petrology, seismology, field work, computer simulation… to aid her understanding of the Guatemala volcano. Her entire talk highlighted that aspect. I was rather impressed.

Secondly, she used a lot of human analogues to aid our understanding. My favourite example being the usage of the silly putty to explain the way magma changed under the volcano. It moved an abstract concept into an understandable reality. Outreach in science should focus on that. Most people think maybe a week ahead with a small-scale world. Raw numbers don’t work when a scientific context needs to be delivered, however using human examples like: “the skull of the T.Rex was as big as a Mini Cooper” drives home points much better.

If you want to learn more about Dr Jackie Kendrick’s work I recommend visiting her site at the University of Liverpool: https://www.liverpool.ac.uk/environmental-sciences/staff/jackie-kendrick/publications/ 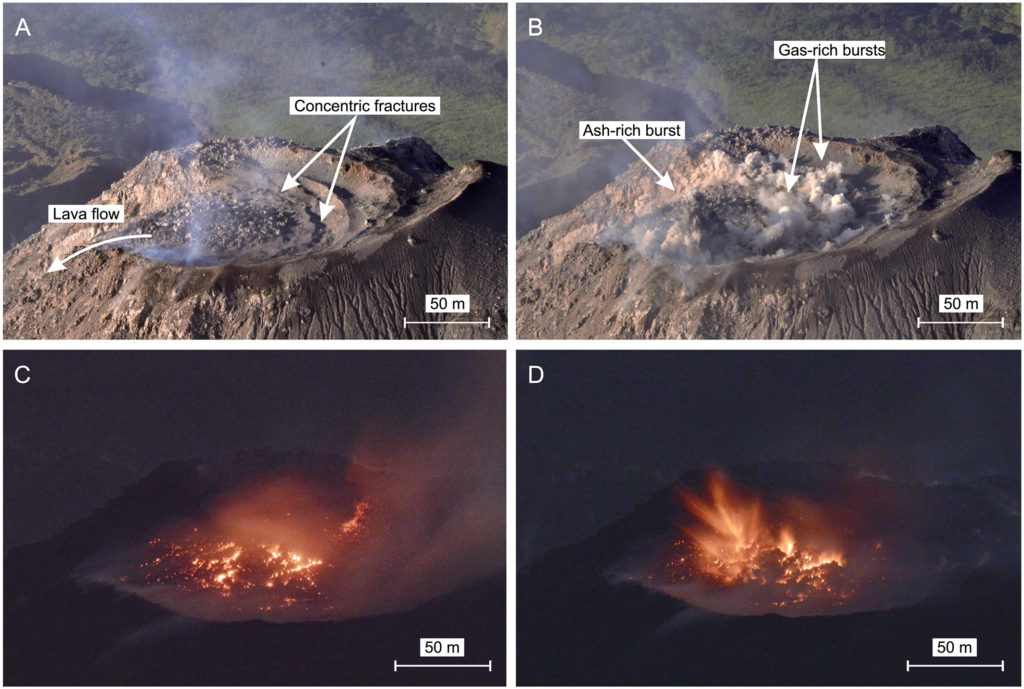 Photographs taken from the summit of Santa Maria, looking down on the Caliente vent. (a) The dome surface immediately prior to an explosion, showing the pattern of concentric fractures and grooves on the dome surface. (b) The onset of an explosion, showing discreet concentric fractures releasing gas, and an ash‐rich burst emanating from a discreet fracture nearer to the center of the dome. (c) The dome structure at night, showing long‐lived (minutes to hours) fracture traces undergoing intense outgassing. Preferential orientation of these fractures subperpendicular to the lava flow direction (to the back and left of the image) is noted. (d) The fractures in (c) are sometimes activated in subsequent explosions, as seen here. Explosions often initiate from fractures within a consistently hot central ring.

In honour of her lecture at the university, I wrote a poem about volcanoes and her work:

PART I
The mountain grumbles,
Like an old Egyptian tomb,
A dark monolith,
Over the landscape of rock.

Beneath, the lava,
Slips, slurps and turns,
Its viscosity changing,
With every shake of the Earth.

Beneath, fractures burst forward,
Shattering mineral and rock.
Extreme pressures hold the magma chamber in grip,
Like a tyrant over freedom, clenching its fist.

Beneath the solemn block of black,
Raging fires keep the mountain alive,
Up to the Gods what the mountain might do,
As black-grey puffs of smoke creep through.

The mountain ’s hiding a terrible secret,
Revealing it in bits and bobs, like a tortured military prisoner,
A bit of CO2 released here and there, with the seismogram dropping hints,
The past leading to the present with the shocked quartz keeping the key.

Shear, deformation, friction of extreme heat,
Takes up the rock forming it with its very teeth,
Fires of hell shoot up in the sky,
As the seismometer dances its drumbeat with shaking delight…

The mountain, no the volcano, her Satanic Majesty,
Growls to life, like a dragon waking from slumber,
The glow at the top, like a big, red angry eye,
As a dark shadow rises above the land,
Suddenly the glow of the sun dies,
A wall of grey rushes forward,
Great darkness emerges,
Heat pushing through,
A great blackness,
Fading into,
Nothing.

PART II
Forward in the future, under the sky of mighty blue,
A weird shape strolls the ground anew,
A hammer clinks on the old rock, a drill moves into action,
A scientist has arrived, minds moved into traction,

The strained rock remains,
Stones ripped apart, thrown over the Earth
Fractures of a thousand run through,
With tall lines of girth.

Rocks are loaded, data is taken, the knowledge hurried,
Captured in a quick instant, in a lab, or on a computer new mysteries remain,
As knowledge is opened up so that man can feel safe again,
The sciences can truly change the system keeping a world from darkness buried.

But once again, the cycle of time continues as a dark rumble leaves the fractured Earth…

Using laboratory experiments to illuminate volcanic processes / Working & Learning at the University of Edinburgh - Student Ambassador, Geologist, Red Lichtie by blogadmin is licensed under a Creative Commons Attribution CC BY 3.0