When you’ve a big challenge coming up – preparation is key. Not just of the kit you are going to need – but the reality of mileage. We have done our chunky cycles before (see previous blogs) – often with trying inclines – always summiting with sweat and smiles. But – when the Bealach Na Ba (the steepest ascent of any road climb in the UK) is on the cards – waking up the legs and mind is key.

We 3 (Kirstie,Jenny and I) met in the early hours – leaving from Edinburgh Waverly at around 7.45am. Stuffed with pastries and coffee of course…

We were feeling pretty professional due to a recent investment in DHB Thermal bibs – that ‘flattering’ all in one set up – but we needed it – thermal leggings with a breathable back woohoo. (Sadly not sponsored by them)

Heading out through Holyrood and Arthurs seat – plenty of friendly ‘hello’s’ and ‘goodmornings’ from runners and cyclists alike – a nice welcome to the morning (which was pretty damn cold! – cue the bib)

As the sun rose in the sky we flew down the seafront at Portobello. Alas we did not stop to grab a slice of cake at any of the inviting cafe’s – we had cycling to do. Passing through Musselburgh we kept right and began climbing towards Gifford – which we reached a lot quicker than expected! We had planned to have an early lunch there – which turned out to be a second breakfast. Rumours of the lovely Lanterne Rouge cafe had reached us – prior to this cycle – so we needed to stop (a cyclists haven apprently!).

We arrived to a quiet Gifford – and soon spotted the bikes piled up outside the cafe. We had found it. 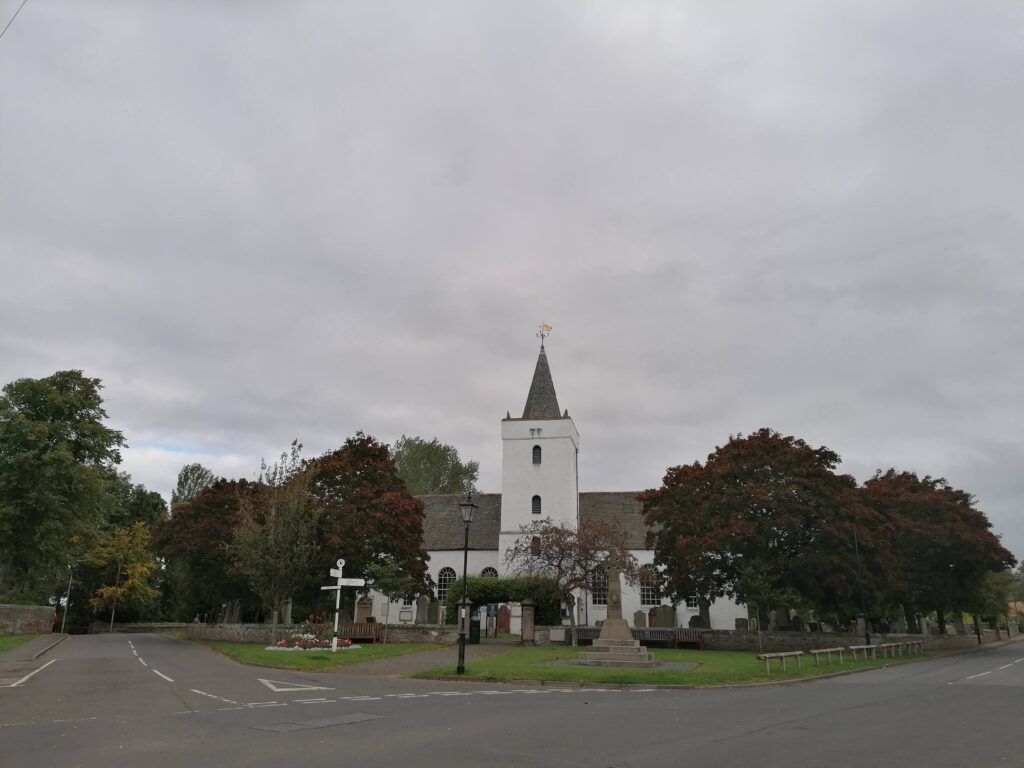 We parked up our bikes and spoke brielfy with the other cyclists outside – who we told of our NC500 challenge. We received some weird looks – which I believe were disbelief. We harped on about our charity cycle and then they quickly sped off … maybe they were also going for it and feared to meet us on their trip on the NC500? We will never know …

All we knew is that it was time for a hot coffee and munch.

This place did not dissapoint. The owner Cameron could not have been more lovely and accomodating. This place was a cyclists haven no doubt. The walls were adorned with old school cyclists jerseys, hats and memorabilia. Very cool!

A few breakfast rolls later – and free refill coffee (wow) we told Cameron about our cycle challenge. He was so supportive and kindly donated to our amazing charity SAMH’S. He even shared our Justgiving page! What a legend.

Well wishes and a few photos later we were getting ready to leave. A lycra’d up cyclist was talking to Cameron – and it turned out he was doing the same loop as us. I jokingly said ‘Watch out – we’ll catch up with you!!’. To say he was unimpressed (I think terrified) is an understatement. With a rather stern look he made a swift exit. Eeek! 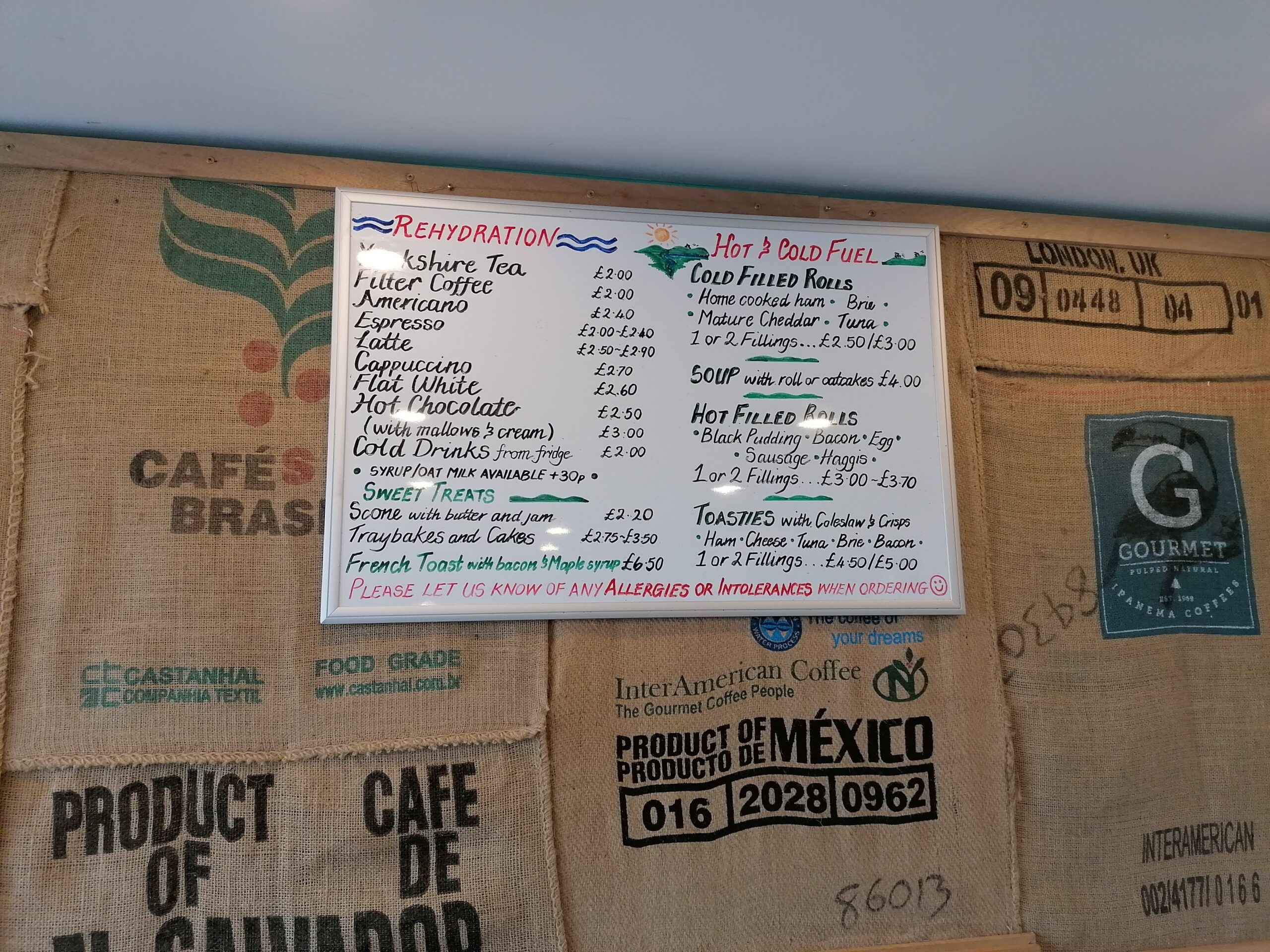 With the almighty bib collection at Lanterne Rouge

Farewell to Cameron – we exited to hop on our bikes – it was still freezing. Now we were headed up toward the Lammermuirs and towards Melrose.

This was very steep. Very. Very steep. 21% gradient .. to a cheeky 17% – we were in Bealach Na Ba territory already. This was a tough ol climb – but we did it!!! I believe this section is called Redstone Rig. At the top of that climb!

Now atop of the Lammermuirs, we flew along – with a whirling wind around, which was neither for or against us. As we cycled on we encountered a massive shooting expedition – along a huge chunk of the road were the gunmen and their dogs – all perched in the heather.

Onward! These roads were beautiful. Now on our way to Melrose we wove through winding country roads – snacking as much as possible while cycling. We noticed from previous cycles that stopping for meals isn’t enough – CONSTANT snacking is important … and we had no problem with that….. 🙂 Or so we thought.

To say that after the Lammermuirs was flat would be a lie … there were plenty of cheeky inclines to keep us entertained and revved up/warm. A brief stop to snack – turns out the good ol sweet – Humbugs – are a welcome treat! This stop was also just before we saw a lovely white HORSE! Another treat.

We pedalled on – with the sun on our side! 🙂 Towards Melrose we pedalled – passing this beautiful viaduct And up the small hill on the left – we swung down into Melrose to stop for some munch! We were not dissapointed. Marmions brasserie – YUM. They provided us with a very welcoming service and brought us jug after jug of water.

Paninis, cake and coffee’s later – we needed to get going. The daylight was not on our side and the sun was starting to go down – but we were well prepared for the dark ahead. Bright lights at the ready! We set off from Melrose – heading towards Innerleithan now to cut right back onto the Lammermuirs.

The sun was waving goodbye to us – and quickly. A few stops to rehydrate and importantly snack – the stunning sunet came and went. By the time we reached Innerleithan it was pitch black. The last of the light!

I love night cycling. From my first experience of it on my cycle to Glencoe  – the black abyss was inevitable (see previous blog posts!). You can see NOTHING – apart from the sliver of road in the beam of your bike light.  But a massive pro to being in the middle of nowhere at night – with no light pollution – is you can see the stars. And they are BRIGHT! A proper blanket of them above you.

We knew that ahead of us lay hill upon hill. But in the dark you cannot see them at all!!!

I find that when cycling in the dark – your focus changes as you cannot see what lies ahead – you are not concerned about the inclines and the concept of time and speed seem to dissapear. I feel a nice sense of peace and quiet. I mean – of course you are thinking of pedalling to stay warm – and trust me when I say that when the sun went down – IT WAS FREEZING. (Turns out this was the coldest night on record at the end of September in years!). But I honestly feel such peace – it’s just you and the quiet dark. Night cycling with the moon

As we pedalled we heard the hoot of some local owls and spotted a very tiny mouse (watch out for the Owl mate!) in the middle of the road – luckily dodged. The temperature was truly dropping – so we had to stop to layer up. I stuffed my face with a Tunnocks teacake and wolfed down some nuts. Energy energy!

We continued on – chatting away and started to wonder where we were and when the huge inclines were going to kick in. A quick check from Kirstie on Strava – WE WERER ALREADY BEYOND HALF WAY UP!! We didn’t even realise. Honestly the dark is your friend! Wohooo! It’s all in your head.

Filled with enthusiam and disbelief we cycled on until we started to see the orange hue of Edinburgh in the distance.

The sighting of a swooping owl egged us on even more – to reach to top of the Lammermuirs. What a view – and what a descent. This was really fun! The swooping roads gave us a fast track down the hills. My eyes were streaming from the speed we were reaching – and the cold!

This last section was the hardest – because it was familiar. As we reached the outskirts of Edinburgh I sighed – out of sadness to be out of the clean black night – but also I was HUNGRY haha. We reached Newington – we said a very quick hunger induced goodbye – at this point my mind was fixated on hot, cheesy – PIZZA! And that is exactly what I devoured when I arrived home.

This cycle was true challenge for us and a welcome wake up to the road ahead on the NC500.

What did we learn?

Snacks are absolutely paramount – and we needed to eat a lot more than we did – can you believe?

I cannot emphasise enough the importance of a good mental support system (aka Jenny and Kirstie).

I recognise, personally, from my previous cycles – sometimes solo – that I massively prefer cycling with company. I feel very lucky to have met Kirstie and Jenny through work at WTCRF and RIECRF – and I feel that our passion for cycling has grown together – and to be frank, cycling aside – the social aspect is the best part. Getting out with friends you can really dig deep with when it gets hard mentally and physically. (The grumpy moments too – they do happen!). The ones who are going to talk back at you in a ridiculous impersonation of some sort in an accent or song. Keeps me going! So thank you to Kirstie and Jenny – I’m sure I wouldn’t enjoy it so much or cover these distances if I was cycling alone.

I would love to hear if you have been on this route before or of any others you can recommend for us to try – when it is safe to do so under the government restrictions. 🙂

If you haven’t been out on your bike at night – maybe give it a try? With a  bright light, high vis, gloves and a flask of something hot – who knows – you may see the city differently or just find some peace in the dark 🙂

NEXT UP – The 2 days of the NC500 – before we had to postpone (We will be returning to it in Spring 2021 – and going from the very start again. To say we cannot wait is an understatement!)