The Suicide in/as Politics project was designed to look at suicide in new creative, critical and political ways. We are currently writing our ethics application for some arts-based community workshops that will (hopefully!) be happening later this year. Whilst preparing for this part of the research, myself and my colleagues on the SIAP team have been thinking about how to do arts-based research well, and a big part of that is about how to run arts workshops well. As part of trying to get to grips with this I recently co-organised a creative workshop with my friend and colleague Rhi/Harvey Humphrey, kindly funded by the British Sociological Association. In the workshop we ran two creative activities, but in this blog post I will speak about our first activity: creative writing. 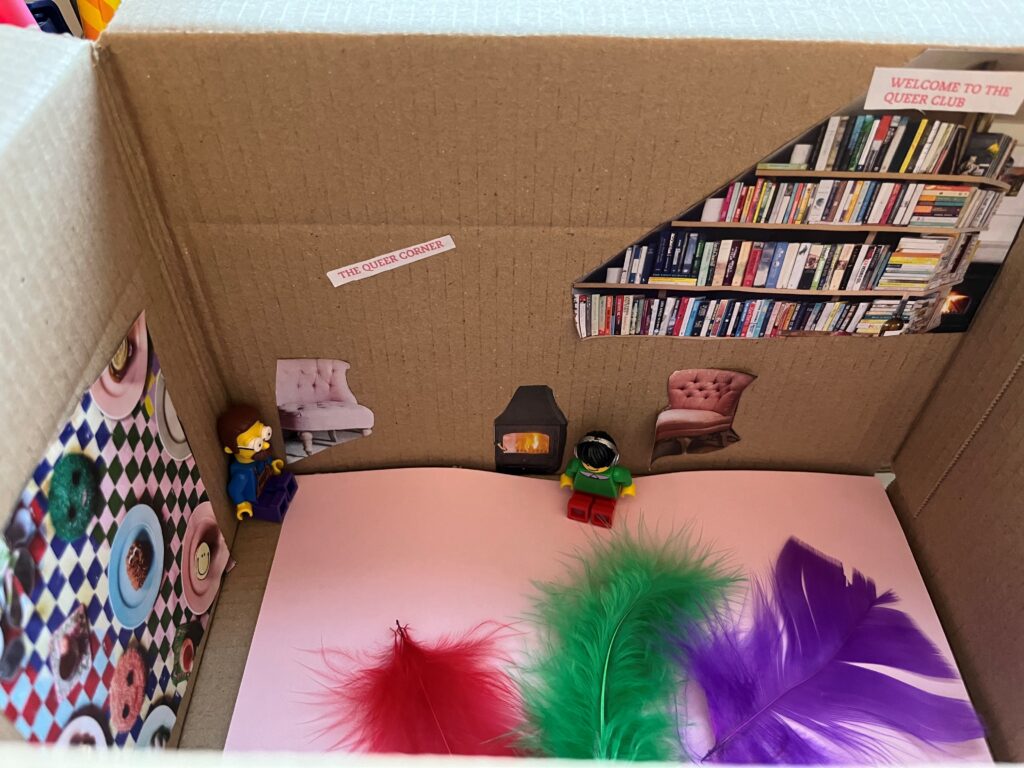 Writing can be so hard! Sometimes, because you’re not sure what you want to say; sometimes because you know what you want to say, but getting it out there in the world feels too scary; sometimes because you’ve been looking at what you’re trying to write for too long and none of the words make sense anymore. I think for me, a lot of the difficulties writing I have are rooted in how unhomely the university can feel for me, and all the many and varied ways that I can feel that I don’t belong in it.

Whilst ‘academic’ writing can be hard for me, often because I worry I don’t sound ‘academic enough’ and so I can find myself writing in my ‘phone voice’[1] (which has somehow now become my ‘work voice’), I find other types of writing easier e.g. I’ve always had a passion for poetry. This isn’t to say I’m good at it, but I enjoy it, and once I get on a roll I find it easy enough to get my words out. Luckily, my co-organiser Rhi/Harvey feels similarly joyful about poetry (check out their staff bio, it’s amazing): so we decided our first activity would be poems.

Now, we were acutely aware that whilst we find poems joyful, many people haven’t written a poem since high school… deliberately. To try and prevent us transporting anyone back to uncomfortable experiences in high school English, we wanted to provide some accessible entry points by offering some ‘found’ poetic techniques. To do this I used some of our ‘outputs’ from the Suicide in/as Politics project to form the base resource from which the poems were created. 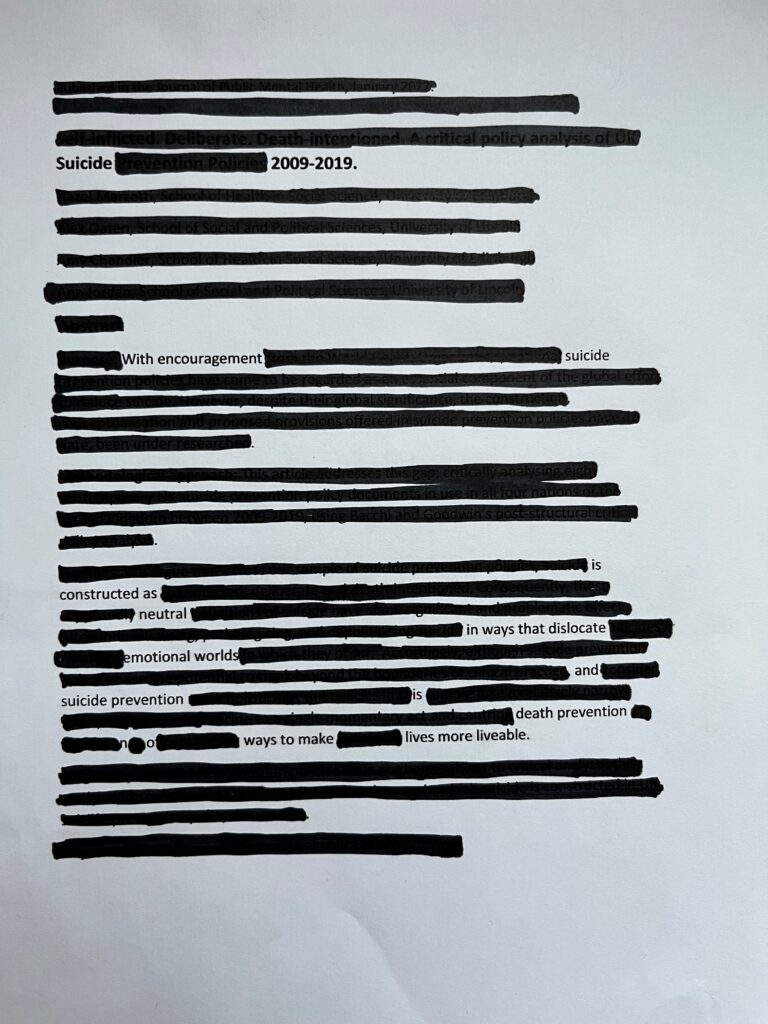 Suicide 2009-2019
With encouragement
Suicide is constructed as neutral
In ways that dislocate
Emotional worlds
And suicide prevention
Is death prevention
No ways to make lives more liveable.

Now whilst I can’t share participants’ poems with you (they were amazing, but they belong to the participants) I can share the examples I created in case you think this might ‘unblock’ your own writing. This poem was created using what I find the easiest ‘found’ technique, called ‘black out poetry’ which allows me to make these least amount of decisions whilst still maintaining some control and remove the words I don’t want, in doing so revealing the words I do want for my poem. This can either be done on paper with a black marker pen, or it can be done digitally using the highlight function set to black. This poem is created from the abstract from our recently published paper ‘Self-inflicted. Deliberate. Death-intentioned. A Critical policy analysis of UK suicide prevention policies 2009-2019’.

In my second example, I used a poem created from the five page (!!!) discussion section of an article that I currently have ‘under review’ (wish me luck!!) in a journal. The article is very precious to me because it was based on my PhD research, and I wanted to use the poem to reflect on my experiences of being an early career researcher and the motivations I had for wanting to organise the event. 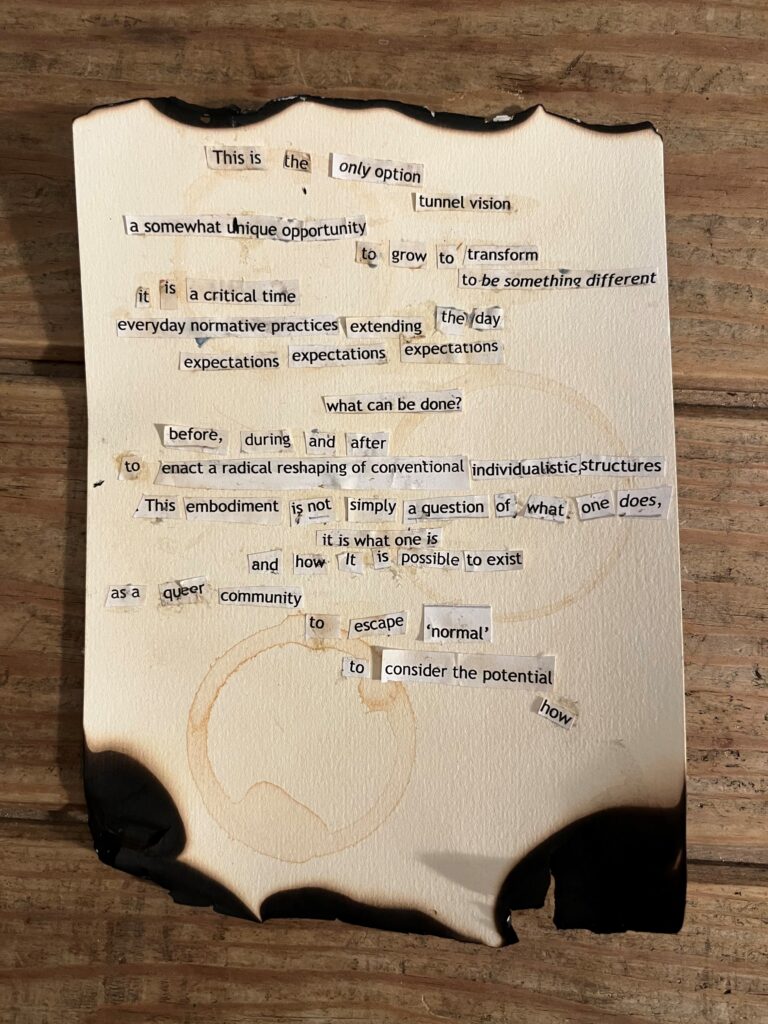 This is the only option

to grow, to transform

to be something different

It is a critical time

What can be done?

before, during and after

to enact a radical reshaping

This embodiment is not simply a question of what does

It is what one is

and how it is possible to exist

as a queer community

to consider the potential

For this poem I used a pencil to go through the five pages and gently underline the words that I thought I might be interested in using. When I was finished underlining, I cut out each of the words (I didn’t do it beforehand because it makes it much harder to continue to read the remaining text  – trust me). I then stuck tiny bits of blue tak to the back of the words and began to arrange them on a blank piece of paper; some of the words got discarded, many of them were placed, moved and then placed again, until eventually I was happy with what I had. This was then put to one side whilst I created the background. To create the background I put every tea bag I used across a single day in a bowl, these tea residue were then used to wash the background of the paper, once dried I then glued on the words of the poem, also washing the stuck on words with tea. Once dried I burned the poem at both ends, to evoke the saying ‘burning the candle at both ends’. 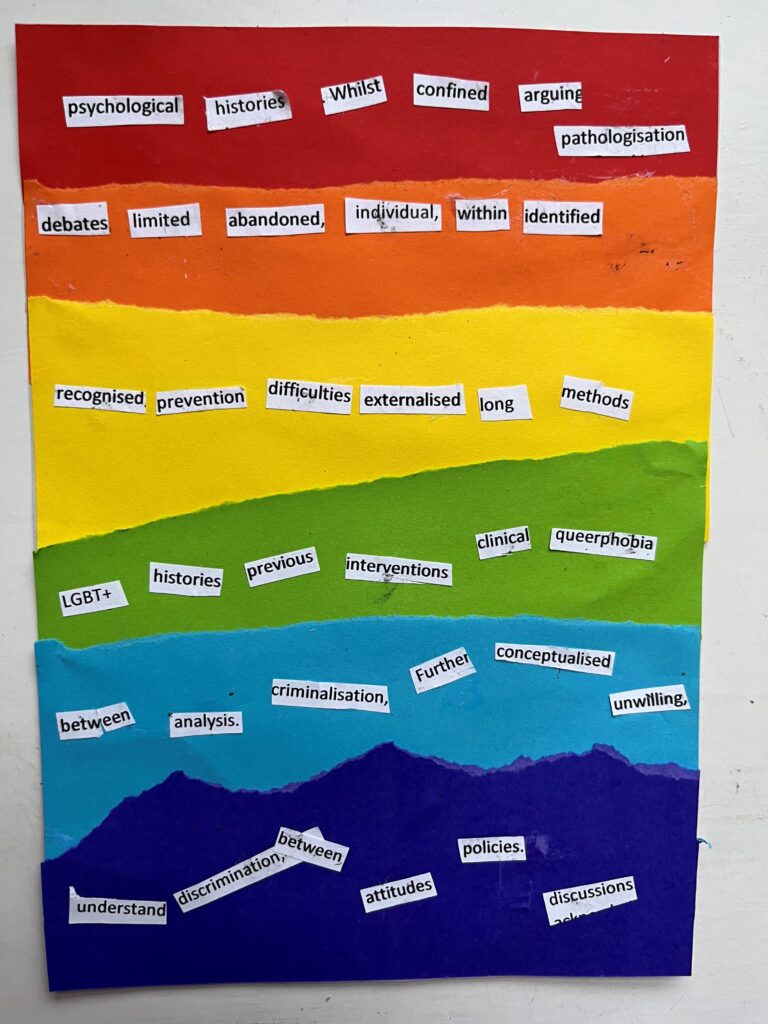 For the final poem, I used a totally random Dadaist technique. I cut up every word from the concluding paragraph of an article that I have been working on for the Suicide in/as Politics project on representations of LGBT+ suicide in suicide prevention policies and parliamentary debates across the four nations of the UK 2009-2019. To try and represent some of the tensions and challenges of representing LGBT+ suicide well, I used a ripped rainbow background design. Influenced by the six colours of the rainbow, I then shook the words about and picked out six words at random for each line of the poem. Although I would have discarded any that I really hated, I didn’t have to as I was happy with what I picked first time around.

It sounds fun, but does it help with writing?

So this event wasn’t specifically aiming to look at writing, it instead aimed to provide an opportunity for community between queer early career researchers. This activity specifically enabled us to discuss common tensions and experiences by sharing our poetic works. This said, I found that writing about my academic work in a different way, by literally picking it up and twisting, turning, chopping and sticking gave me an opportunity to see my work from a totally different angle. It allowed me to think about what I really wanted to say; what was really important when I cut away the many words that academia encourages us to put in. It also gave me time to pause, to stop doing the same thing with writing and hoping to get a different outcome, which is something I’m mega guilty of. Often if I have a writing blockage I see it as a personal failing, and I try to persevere and make it better, when often instead I need to step away and come back with fresh eyes. I think creating a poem like this could really help me to get the time, space and energy to revitalise work that is becoming tired. But enough about me, try it out and let me know what you think!

[1] If you don’t know what a phone or work voice is: it’s a posher version of my own voice, that I use if I’m answering the phone and I don’t know who it is, or that I use to interact in all work environments. It’s not conscious, in fact I didn’t know I had it until one of my best pals saw a video of me and said “whose voice are you using?”

This blog was originally posted on my own website – but with thanks to Amy Chandler, Ana Jordan and Alex Oaten who commented – this version has been slightly edited for the Suicide in/as Politics blog.

Are you writing in your ‘phone voice’? / Suicide in/as Politics by blogadmin is licensed under a Creative Commons Attribution CC BY 3.0