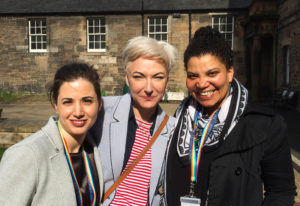 The Everyday Cyborgs and Humanimals event on April 14th at the Filmhouse was the first public screening of four short films exploring fears, hopes and anxieties, as well as the everyday reality, of being not-fully-human. The films were made by local artists, creatives, and a group of young people, as part of the Animal, Mechanical and Me: The Search for Replaceable Hearts project led by Dr Gill Haddow in Science Technology and Innovation Studies at the University of Edinburgh and funded by the Wellcome Trust.

The project explores patient experiences and public reactions to using material from non-human animals or from implantable cybernetic systems to repair, replace or regenerate the human body. It seeks to bring patients’ experiences, anxieties, and wider questions around human identity and selfhood, to bear on conversations about recent developments in medical technology. The film screening was part of a more general attempt to showcase social science research at Edinburgh University to wider audiences, and to generate public awareness and debate about these issues.

We decided to wear rainbow lanyards in addition to the classic dark-blue one to promote a more inclusive public image of the University, but also to pay tribute to the LGBT+ contributions to academic thought around identity, selfhood, and embodiment, and around the figure of the cyborg in the Western cultural imaginary.

Filmhouse event / Staff Pride Network by blogadmin is licensed under a Creative Commons Attribution CC BY 3.0