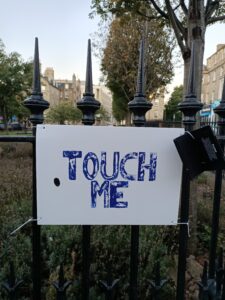 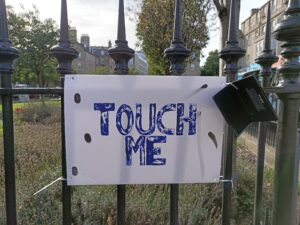 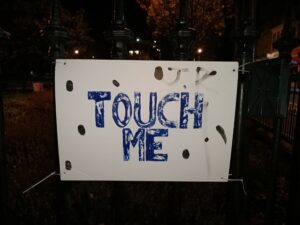 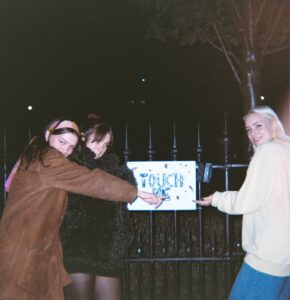 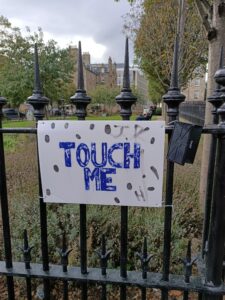 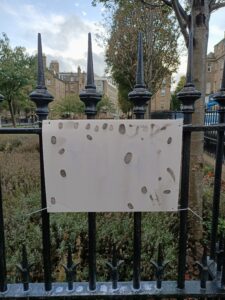 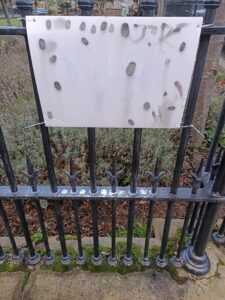 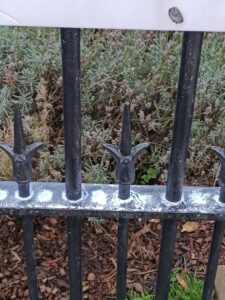 Upon my last check of TOUCH ME, pictured above, I discovered that the rain had washed away my original print, leaving only faint black fingerprints on the board. The ink pad was gone, along with the tags that had kept it in place, and blue and white sediment from the ink was visible on the railings directly below the piece. The piece has therefore been stripped of its original purpose, both by the elements removal of the instruction, and human removal of the mark making material. However, I believe that through this, the piece has also somewhat achieved its goal of connecting with the public of Nicholson Street, and leaving a physical imprint of the public who frequent it. The piece now looks as though it belongs in its surroundings more than ever, having gone through sunshine, wind, rain and time on the street. To me this is a great achievement, I have made a small landmark of the public of the street, and even if it is taken away soon, for now it is at home in its place, it belongs to the street.

One room exhibition in the basement of City Art Centre. Varied collection (although almost all 2D work) and I enjoyed looking around. One annoying attendee playing a loud game on her phone. Family of gingers also in attendance. 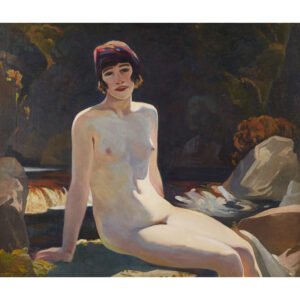 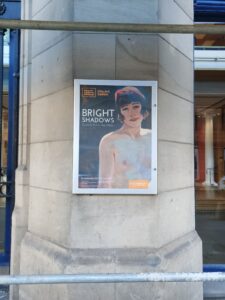 This piece is new to the gallery and as such was made the “face” of its ‘Bright Shadows’ exhibition. The hair, hat and build of the lady pictured certainly do scream 1920s so you can see why they chose it. In the gallery the accompanying information describes how this piece was scandalous and revolutionary for its time as the lady is painted nude in a relaxed, outdoor environment, she seems comfortable and in control, staring towards us, and indeed the sitter was the wife of the artist. I’m personally in two minds about the piece. While it is refreshing to see a nude where the lady seems relaxed and real, to me this still feels nude rather than naked. The sitter is deliberately posed, and even if the pose is relaxed this jars in my mind with the idea of her having more control. It also got me thinking about the exhibition of the piece and its use in promotional materials, particularly posters hung up around the city. To me, this doesn’t seem like a moment that was intended to be put on display to the public. Her body centres the piece, your eyes drawn to her flesh before even her face. It feels like a holiday snap, a moment shared between lovers, with the woman’s body admired under the males gaze. I wonder if she thought, while she was modelling for this painting, that her body would be used to advertise a City Art Centre exhibition 100 years later. The pair also divorced 7 years after the creation of this painting, with both of their careers falling apart shortly after and Eric turning to alcoholism. This piece perhaps then represents the bitter sweet happiness of the past, its resurfacing a little sad. 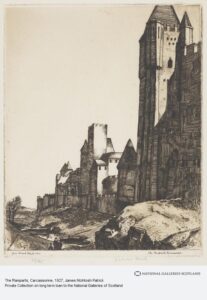 Really liked this piece in person – less so when viewing online. 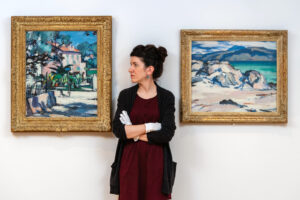 Peploe was one of the four Scottish Colourists – along with Cadell, Fergussen and Hunter. My favourite of the two pieces was ‘The Pink House’ because I found it really evocative of the feeling of being in a warm foreign street, on holiday and feeling free.

“The Scottish Colourist S.J. Peploe was first introduced to Iona in 1920 by his friend and fellow artist F.C.B. Cadell. He proceeded to return to the island almost every year until his death in 1935. The peaceful atmosphere offered him a sense of freedom and mental rejuvenation, while the brilliant white beaches proved an enduring source of inspiration. Peploe’s paintings of Iona cemented his reputation during the 1920s, and still remain among his most iconic works.

Rather than depict the grassy southern end of the island, the artist favoured painting in the north, taking advantage of the views towards Mull. He often worked outdoors, sometimes in a single sitting.” 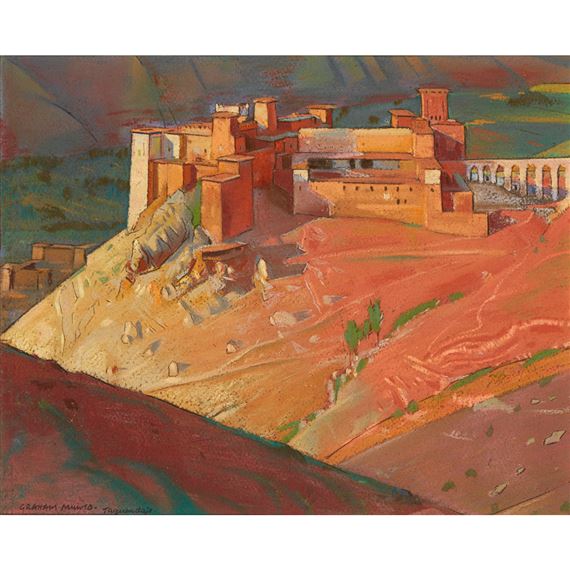 This was my personal favourite piece in the exhibition. It is very beautiful in real life, the colours are absolutely gorgeous and the landscape dreamy, foreign, hidden in hills, mysterious and like something from a story. 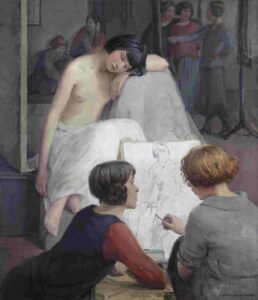 “Dorothy Johnstone was just 16 when she enrolled at Edinburgh College of Art. Having excelled as a student, she joined the college’s teaching staff in 1914.

This painting offers a glimpse into one of Johnstone’s classes. A life model is shown taking a break from posing, while students discuss and refine their compositions. Johnstone herself appears in the top right corner, working at an easel.

Rest Time in the Life Class was displayed in 1924, the same year that Johnstone married the artist D.M. Sutherland. She was subsequently obliged to resign from her teaching position, as married women were barred from holding full-time posts. Although opportunities for women artists slowly improved during the 1920s, discrimination remained common.”

I liked the accompanying study portraits, and was interested by the story of the young artist at ECA. 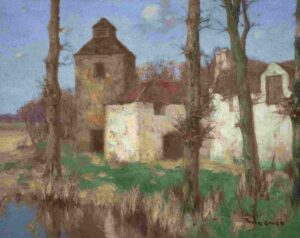 I was really drawn to this piece in the gallery. I liked how washed out the colours were, which, combined with the outskirtsy subject, made the scene appear dreamy and forgotten. I also liked the large scale, and found the choice of frame interesting (large, antiquated and brown).

“David Gauld is one of the lesser-known artists associated with the Glasgow Boys. During the 1880s and 1890s he was one of the innovators of the group, creating illustrations, paintings and stained glass designs with a strong Symbolist aesthetic.

Spring Morning is characteristic of his later work. Gauld was drawn to semi-derelict buildings in rural locations, and painted many such scenes of farmhouses, barns and mills glimpsed through trees. The setting of this picture has not yet been identified; it could be somewhere in Scotland or France.

Gauld was elected as a full member of the Royal Scottish Academy in 1924. This canvas was exhibited at the Academy’s annual exhibition in 1927.” 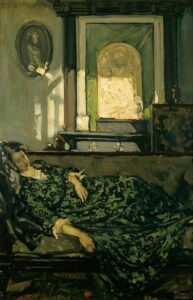 “a painter and art educationist, best known as director of the Glasgow School of Art between 1885 and 1917. Under his leadership the School developed an international reputation and was associated with the flourishing of Glasgow Style and the work of Charles Rennie Mackintosh and his circle. Newbery helped commission Mackintosh as architect for the now famous School of Art building and was actively involved in its design.

Born in Devon to a shoemaker and his wife, Newbery went to school in Bridport, Dorset where he qualified as a teacher, and later as an art master. While working and studying in London he won an ‘Art Master in Training’ scholarship in 1881.

At the Glasgow School of Art he was a vigorous and innovative headmaster. He gave teaching posts to practising artists rather than relying on certificated art masters. He established an art club allowing students to branch out from the national art school course, and employed several women teachers, unlike most other UK art schools of the time. Newbery established craft workshops and introduced embroidery classes where his wife, Jessie Newbery, played an important part. Overall, he wanted students to have a strong training in traditional techniques, while developing their unique individual talent. His own painting was associated with the Glasgow Boys‘ and he was close to James Guthrie and John Lavery.”

Fra just seemed like a cool dude. He advocated for greater gender equality in arts teaching, and the Newbery family are apparently interesting artists.

Small exhibit (one room), not much relating to my interests but still enjoyed the visit. 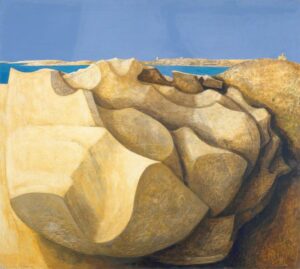 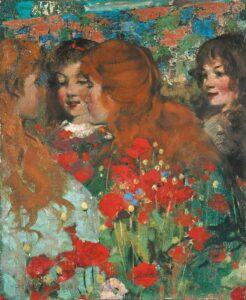 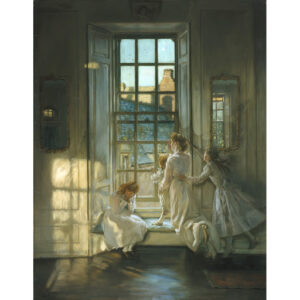 ‘The Flight of the Swallows’, John Henry Lorimer. Oil on canvas, 1906.

Artist painted a number of paintings set in surroundings inspired by the beautiful Kellie Castle, where him and his architect/furniture designing younger brother Robert Lorimer holidayed in their youth. This piece reminds me of Peter Pan. The flight of the swallows is said to be allegorical of growing up and leaving childhood, hence the weeping girl to the left. A very beautiful painting to see in person – soft and dappled brush strokes and large in scale. I liked the reflections in the mirrors. 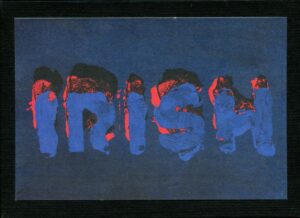 Leaf/Bark was on display and I found Tree online. I like the simplicity, reminds me of my own use of postcards with simple prints. Never thought of using bookmarks before but I like that they have a vaguely practical but outdated use, like a postcard. Discardable object made exhibited artwork. 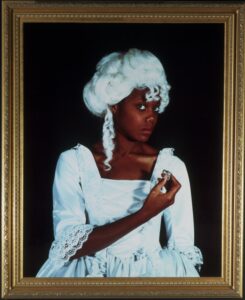 “This photograph is from a series of portraits of creative black women by Maud Sulter, who is of Ghanaian and Scottish parentage. The series is called Zabat and shows each woman as one of the nine Greek muses. The word Zabat describes an ancient ritual dance performed by women on occasions of power, and her use of it signifies Maud Sulter’s call for a repositioning of black women in the history of photography

The model here is the performance artist Delta Streete who had created the costume she is pictured wearing as part of a dance performance and installation called The Quizzing Class, which explored relationships between women, particularly that between slave and mistress. Here Streete is presented as Terpsichore, the muse of dance.

Maud Sulter produced the Zabat series for Rochdale Art Gallery in 1989, the 150th anniversary of the invention of photography. It was a direct response to the lack of a black presence at other celebratory events and exhibitions.”

Found it quite powerful & commanding in the gallery. Makes you rethink the pieces you’ve already seen and their lack of black subjects. 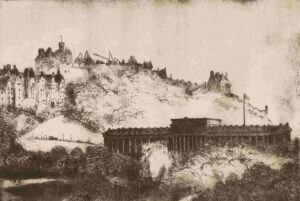 “The Scottish National War Memorial was the most significant public art project to take place in Scotland in the 1920s. Designed by the architect Robert Lorimer, and located within the precincts of Edinburgh Castle, the Memorial was devised to honour the causalities of the First World War on a national scale. Construction work began in 1923 and continued until 1927.

This etching by Nicol Laidlaw records the progress of the project in 1925. A series of cranes and temporary structures can be seen on the horizon, gradually transforming Edinburgh’s architectural skyline.

The revival of printmaking was a major trend in Scottish art during the 1920s. Increasing numbers of artists earned a living making etchings for a buoyant commercial market.” 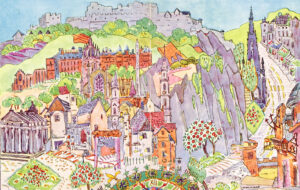 Bright colours and playful style stood out to me in contrast with the countless “serious artworks” and dreary grey views of Edinburgh. 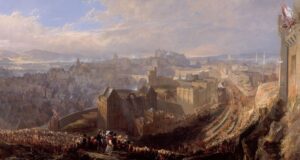 ‘The Entry of George IV into Edinburgh from the Calton Hill’, John Wilson Ewbank. Large scale oil painting, 1822. Shown in the exhibition ‘City Art Centre at 40: Highlights from the City’s Art Collection’.

Stands out to anyone as a very impressive painting due to its scale and subject. 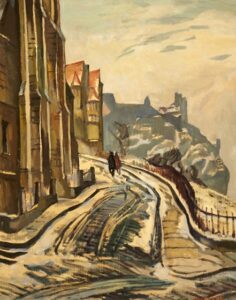 ‘View from the Mound, Edinburgh, Looking West’, William Crozier. Oil on panel, 1929. Shown in the exhibition ‘Bright Shadows: Scottish Art in the 1920’s’.

A snowy day in Edinburgh. Mysterious, inviting and scenic. 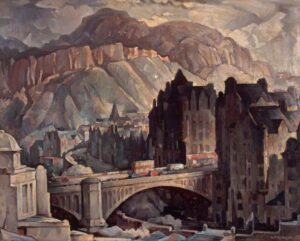 ‘the beautification of our public buildings in Scotland’ – a new view of the Old Town. 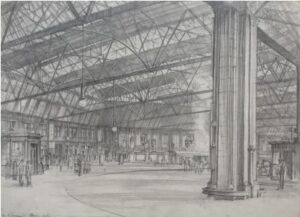 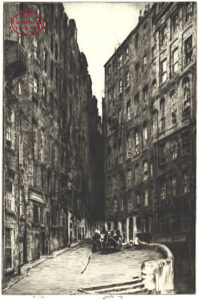 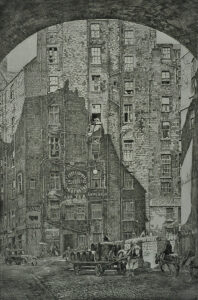 ‘The Saut Buckets, Edinburgh’, 1926 and ‘Edinburgh Tenements’, 1934. Ernest Stephen Lumsden, drypoint etchings. Not sure which specific piece was shown at City Art Centre.