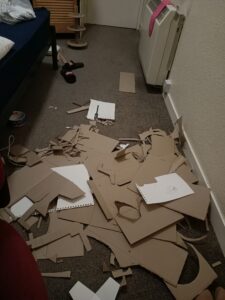 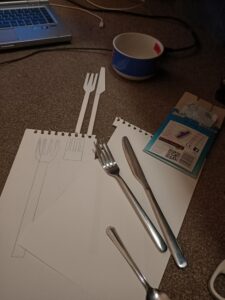 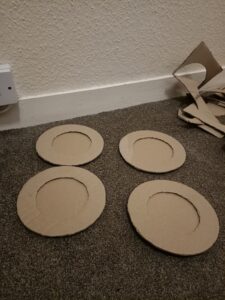 Shown above are some photos which give you an inclination of the carnage that took over my room while I worked on this project. Carboard is not a friendly material, as my carpet and irritated palms can attest to, and it takes some wrestling to get it to behave in any useful or attractive way. The making of these pieces therefore took much longer than I had anticipated/planned for. 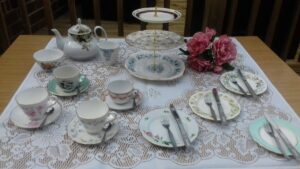 I ended up basing my set on this image found on Google, from an eBay sale of a vintage tea-set. It felt like a good amount to tackle. 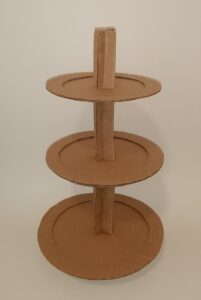 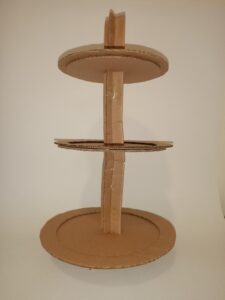 The centrepiece, a three tiered cake stand, was the first piece I made. Measuring each piece was a challenge, as you can see she turned out rather wonky, but I think she’s pretty cute nonetheless. “Rustic charm” springs to mind. 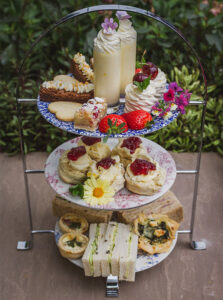 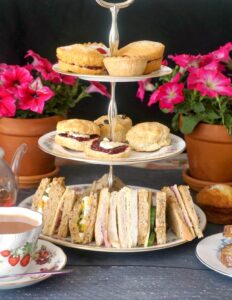 I actually debated for some time over which style of cake stand to emulate – so much so that I delayed the project from starting by at least half a day as I ruminated on which I preferred (the first) and which was feasible (the second). I inevitably gave in to practicality :/. 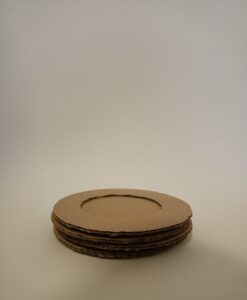 I decided to make a tea set as my first foray into cardboard because I knew it was something the whole flat would enjoy using, something which we wouldn’t otherwise have access to and it would test the limits and uses of the material. I had recently attended afternoon tea at the gorgeous (very expensive!!) Prestonfield House Hotel, which we had discussed wistfully as a flat, knowing that we could never afford a trip there together without our parents as financial sponsors, so I think this is what inspired the idea. 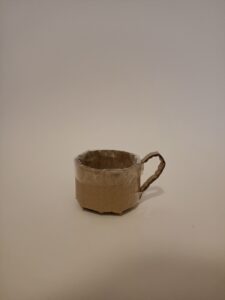 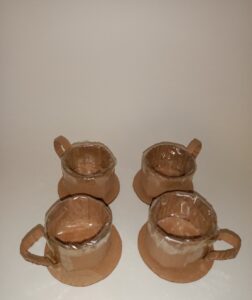 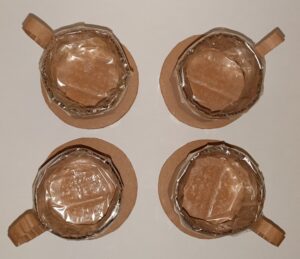 The juxtaposition of the typically high-class activity with the low-class materials interested me, and I thought added a level of humour to the event. Why dine from fine china when you can reuse your food packaging, adding Sellotape and glue here and there… 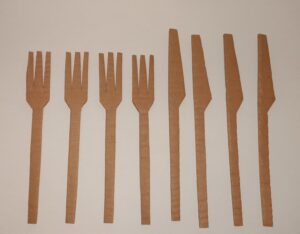 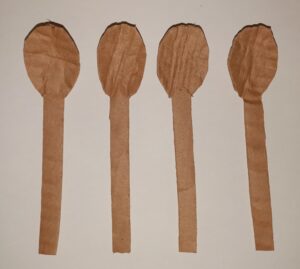 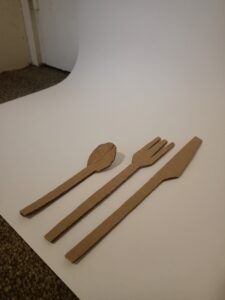 A tricky part of the process was the fact that I have 3 flatmates, therefore four sets of crockery were required. I used paper patterns and the natural lengths and creases of the cardboard to try and make them as uniform as possible, but of course the pieces are incredibly crude in their design and execution. I’m an ideas woman, not an artisan. 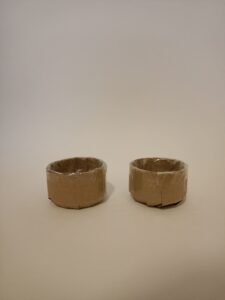 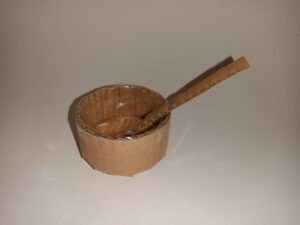 I used a combination of plastic folders, Sellotape and a freezer bag to waterproof my creations. The cups, jars and the teapot all received this treatment in an effort to make them at least partially functional. This was very time consuming, much Louis Theroux and 60 Day’s In was consumed during this process. 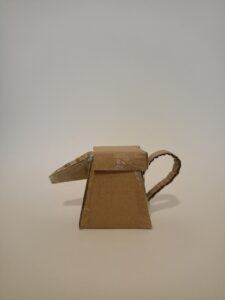 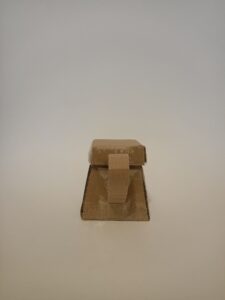 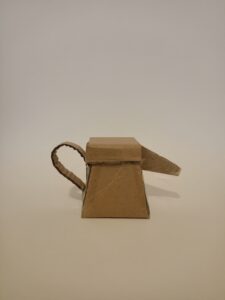 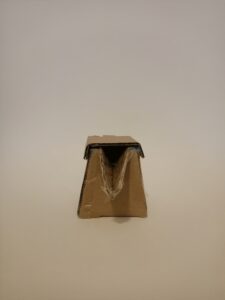 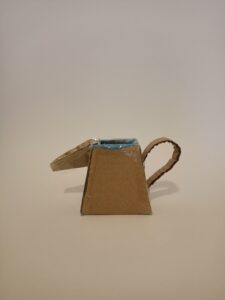 The teapot was probably the most aesthetically gratifying piece to make – it’s just so goddamned cute. Adorable one might say. This was made in four pieces; square based pyramid body, handle, V-shape spout and a folded lid. It took me a long time to make, and I knew it was highly unlikely I would even use it to pour tea, but I think it really brought the set together. 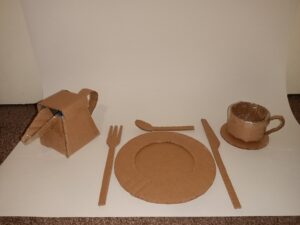 Overall, not the most enjoyable process, very time consuming, at times mind-numbingly boring, and irritating on the hands. However, I was very happy with the results, possibly because I was acutely aware of the effort that went into them, and once I found my rhythm I did come to enjoy making the pieces, the cups being particularly fun to make. Making took me three days in total. 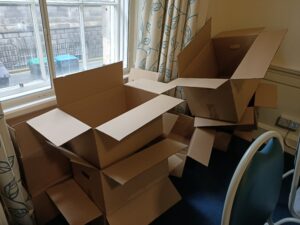 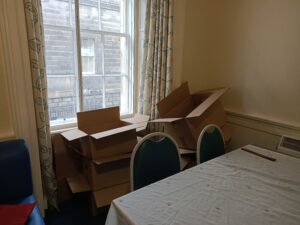 On the 7th of October 2020, my flat, occupation five students, went into self-imposed isolation after one of my flatmates, Molly, tested positive for Coronavirus. Over the next two days we received a total of 11 cardboard boxes, each filled to the brim with snacks, cooking materials and ingredients. While well-appreciated, after we had put all of our food goodies away we found we were now the proud owners of 11 large empty cardboard boxes, that piled up in the corner of our dining-room-cum-living-space began to block some of the light from the windows, and appeared quite unsightly.

Now of course, we could have simply flattened all 11 boxes and gifted them to the recycling bin on our road. This would have been a fast and practical resolution to our conundrum. However, I am nether a fast or a practical person, so I decided I would bestow upon the boxes a second chance at life, in the form of material for my ‘Extraordinary Object’ project – which I had previously been struggling with. 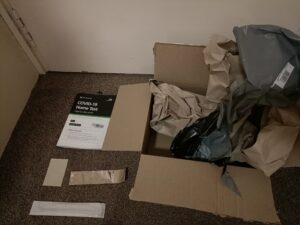 A twelfth cardboard box arrived at the flat a day later, on Friday the 9th of October, after I ordered a Coronavirus home testing kit from the Scottish Government. For some unknown reason, while the actual test package was quite small, it arrived encased in a much larger cardboard box, which I kept, alongside some of the materials from the test. 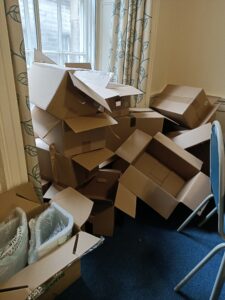 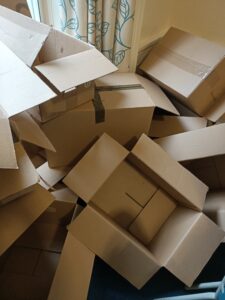 On the morning of Thursday the 15th of October, a further 6 boxes were delivered, their vacant corpses soon joining the growing pile in our living room. 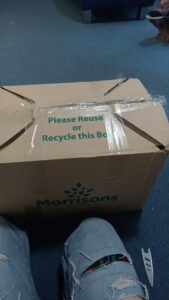 Later that day, a 19th box was delivered, a gift from my parents to offset the pains of living in a predominantly vegan flat. The box came complete with two freezer bags and heavy ice packs. A 20th box, a meat package from the uni, arrived the next day, therefore completing the collection.

I decided upon some rules for my project, they are as follows:

20 Cardboard Boxes. All delivered within two weeks, and all to be used, every last piece, in my project- or so help me god.