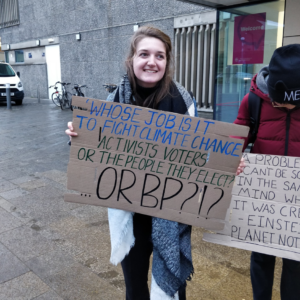 I attended the annual meeting with my personal tutor and instead of feeling intimidated and embarrassed that I still hadn’t mastered Uni after 3years, I left with a sense of pride in my school and affirmation that I belong. I was told New College had plans for COP 26. The Conference of the Parties which is taking place in Glasgow this November where representatives from most countries will come together to discuss how to tackle the climate and ecological emergency…for the 26th time! I listened eagerly as Suzanna told me about the Art for the Climate project where New College’s grandiose would be set to its full use with banners hanging down from its two tremendous turrets spelling out “Creation Care Not Ecocide”.

The School of Divinity has presented me with many opportunities but I am most thankful for the chance to connect to the community at New College through climate action in the form of art. I do consider making a banner, from old bedsheets, clothes and materials spelling out “Creation Care not Ecocide” by over 40 faith groups, activists, students and staff, a beautiful expression of collective climate action. People tend to think it is just politicians and activists who can tackle the climate crisis, but everyone can have a role. In fact, everyone must have a role, since we will all be impacted by this crisis. 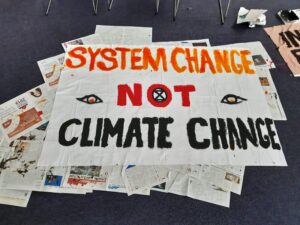 Millions have already been affected. It is devastating that those in the Global South suffer the worst effects of the climate crisis, despite barely contributing to the global greenhouse gas emissions which are the cause of the global rising temperatures and environmental emergency. Crucial fields have turned to rivers in Bangladesh. Hurricanes hit Haiti harder every year, exasperating the “acute food insecurity” which affect almost 46% of the population (4.4million people).The struggles of the indigenous people in Africa and Latin America are widespread as the leaders of the climate justice movement who risk their lives to protect their people and the planet. This year a record number of 220 activists were murdered. Greta Thunburg herself has received numerous death threats. But it is much safer for people with the privilege of living in the Global North, far from the frontlines, to take action for the climate. However, the Global North is not free from environmental devastation.

Europe experienced another heatwave this summer, with Greece reaching 45 degrees. More than 3000 hectares of olive and pine groves were destroyed by fires in West Turkey alone. 40,000 people die from air pollution in the UK every year as revealed through the life of a mother who lost her daughter to the poisonous London air, in a short documentary series on Waterbear. The climate and ecological emergency affects everyone and everything on this earth.

So we all must engage in climate action to protect ourselves, our families, humanity and the rest of nature from the scientifically predicted catastrophes which will destroy all we know, if we do not all act. The COP 26 in November is crucial for our future. But we cannot rely on the leaders of the countries to solve the crisis. They have let the Youth down for almost 30 years. In 1992, 12 year old Severend Cullis-Suzuki spoke at the earth summit,  “I am fighting for my future. Losing my future is not like losing an election or a few points on the stock market. Do not forget why you are attending these conferences. You are deciding what kind of world we are growing up in. Please make your actions reflect your words.”. She is now 41! In 2016, 196 countries signed the Paris Agreement, which bound the nations to commit to reducing emissions enough to stay below 1.5degrees celsius of warming since industrial levels. These promises have not been kept. We are on track for 3 degrees, which would see the majority of the coastal line under water, with cities such as Miami, Rio, Hong Kong and Shanghai entirely submerged. More than 17.5million people would be displaced from Shanghai alone! 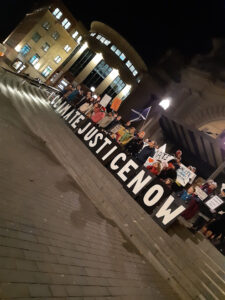 This is not a world youth can grow up in, even 2 degrees would be devastating for millions, much of Edinburgh’s lovely Leith may cease to exist. The leaders will not listen to science. It reveals their firm belief in continuous growth is delusional and to pursue profit at the expense of the earth is a death wish. Not only for those exploited but the exploiters themselves and their families, friends and livelihoods. But because the majority of climate related deaths currently take place in the Global South or the poorest most polluted areas of the Global North, the leaders will fail to take sufficient action. That is not to say the COP is not important. It is absolutely necessary but not for creating a deal unlikely to be upheld. For creating a mass global climate justice movement, where the average person prioritises people and planet in everyday life over profit, pride, power and short term pleasure.

There are so many ways you can contribute to the climate justice movement. I am part of People and Planet Edinburgh, a student society which campaigns for social and environmental justice. I also organise actions, meetings and outreach with Extinction Rebellion (XR). We join the COP coalition every Saturday on Middle Meadow walk to rally support for any current climate justice campaigns and the COP. I will be in Glasgow as a volunteer for the COP coalition as well as a participant in many actions and events to churn up momentum for climate action. I do consider myself an activist and believe we must take direct action to make the change necessary for our future. However, I also believe that we must make the change ourselves as well as pressuring governments. That is why I also partake in various community projects which all contribute to a “greener” future.

I volunteer at The Welcoming’s “sustainable garden” and I have recently started helping at the Mosque community garden with the Muslim Women’s Association and Mahmoob, who made the Islam patch for the banner. If you enjoy gardening, want to engage more with the Edinburgh community and do something practical, I would highly recommend joining a community garden. There are numerous in Edinburgh (links below), including one on the Meadows and the Salisbury centre in the heart of the student area. If you don’t like getting your hands dirty (literally…the work itself is far from dirty it makes air cleaner), and are more into organising events you could help plan the next Climate Festival. I was in the Art Installation working group this year and we selected an artist duo who created an incredible informative and interactive installation that told a story of ocean pollution, fast fashion and food production. It was the Climate Festival that propelled me back into action as it restored my faith that a just and green world is possible, as 54 groups and organisations are already working for one, in Edinburgh alone! There were numerous renewable energy organisations, activist groups, conservation and wildlife protection associations. There were stalls about sustainable arts and crafts, printing, nappies, period products, farming and of course community gardens. One of the most exciting stalls was about a new Climate Community Hub called “Our Future Edinburgh”, the vision behind it is to connect all these groups and act as a driver for change within Edinburgh. One of its associations is called Sustainability Partnerships, focusing on bringing sustainability into the curriculum. 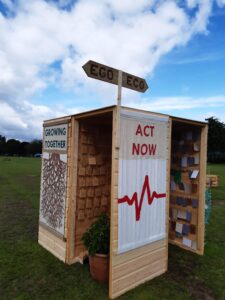 I am involved with their first School Climate Summit, “1.5max”, where 13 schools from Scotland, Mozambique, Malawi and Nepal will take part in a three day event. The aim is to get the pupils interacting and finding solutions to their local climate related problems. I strongly believe that the answer to the climate crisis lies in education: teaching kids to value nature, think critically, and act creatively and innovatively on local and global issues. If you have similar passions please get involved. Solving the climate crisis cannot be relegated to politicians and activists. We must all act for a better world, no matter your background and experience, you will have skills that the climate justice movement would benefit from. So get involved!

Consumption that doesn’t cost the planet