“It’s Time to Build a Better Research Culture – One That is Creative, Inclusive and Honest”

It was great to see how the Wellcome Trust made a real effort in ensuring its Reimagine Research Culture Festival (free online event held on 22-26 March 2021) was accessible to everyone. The Festival included meditation sessions, British Sign Language interpreters, and live captions for video content. Moreover, before delivering a presentation or joining a live discussion, all speakers briefly described themselves for those who have a visual impairment as well as for those who preferred to turn their video function off. In addition to this, all live events were recorded and were circulated after the Festival. Several speakers were women and the panelist who was invited to discuss about the challenges endured in academia by people who have disabilities was actually a researcher with disabilities, Dr Katherine Deane. Dr Deane made brilliant contributions and generously shared with everyone attending the Festival a wealth of resources on how to make events truly accessible to all. These resources are available at this link. A number of panelists attending the festival were from Black and Asian Minority Ethnic (BAME)[1] groups and a few of those who were White (especially male academics with tenure) admitted being “privileged,” openly discussing about structural injustice in academia and gender, class, and race bias.

The Reimagine Research Culture Festival focused on how everyone (funders, institutions, and individuals) can actively promote diversity, equity and inclusion in academia while reinventing research culture. There was some constructive discussion about how to better reward all members of a team and, especially, how to better support ECRs (Early Career Researchers) on precarious employment with fixed-term contracts. It was reported as a good practice how the University of Glasgow (@UofGlasgow), for instance, has already built responsibility for improving research culture into their redesigned promotion criteria. Their approach recognises not just the achievements of the individual researcher, but also how they have supported the careers of others. As 68% of research staff in the UK are currently on fixed-term contracts, Jane Thompson – Bargaining and Negotiations Official at University and College Union (@ucu) – stated: “We need a critical mass of employers to address this long-standing issue and work with their staff unions to develop a better, more sustainable model of research.” To build and promote a positive research culture that actively supports diversity, equity and inclusion, attention was raised also on how change must become an “everyday practice,” as Dr Karen Salt put it (@drksalt). This includes supporting people better, recognising their achievements, and calling out negative behaviour including bullying and discrimination.

Dr Beth Thompson (@Beth_Thompson) chaired a live session on leadership and promoting a positive working culture (link here). During this session, it was discussed how “funders focus intensely on small numbers of things” (namely peer-reviewed publications and awarded grants), whereas “there is much need to account more for diversity and difference when assessing researchers, considering a wider range of skills.” @UKRI_CEO Professor Ottoline Leyser pointed out: “It is not necessarily the high level of competition the real problem in science, as this was always the case. It’s the rules for winning that are the problem.” Attention was drawn to how UKRI have already adopted a new CV format, the Résumé for Researchers. Developed by the Royal Society, the Résumé covers the same outputs as a standard research CV, but also includes culture-related activities like public engagement, training and knowledge exchange.

Another highlight of the Reimagine Research Culture Festival, was a recorded discussion between Dr Dan O’Connor (Wellcome’s Head of Research Development – @drdanoconnor) and Dr Megan Reitz (Ashridge Hult Executive Education – @MeganReitz1). They discussed about the responsibility that private foundations like the Wellcome Trust have for building a positive research culture for everyone, with insights into how individuals can disrupt the status quo (link here). Attention was drawn also on the @edisgroup hosted by the Wellcome Trust, a coalition of organisations working within the science and health research sector committed to improving EDI (Equality, Diversity, and Inclusion). More info at: edisgroup.org.

Other live sessions of the Festival focused on: Which changes are already making a difference to research culture? How can we continually improve workplace culture? The Wellcome Trust shared a report which provides data on the grants the organisation has funded over the past year and funding trends for the past five years (link here). From this report: 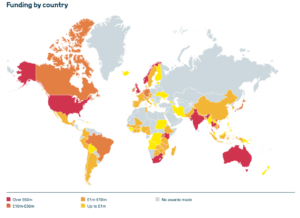 in Fig.2 the percentage of awards made by gender; 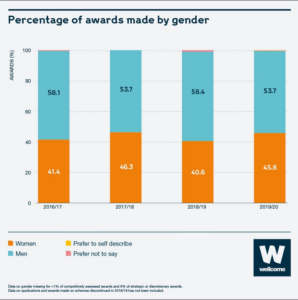 in Fig.3 the percentage of awards for £1m or more by gender; 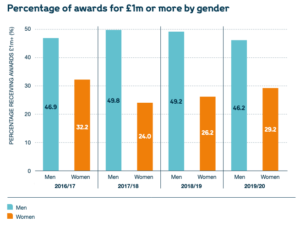 in Fig.4 the ethnicity of awardees; 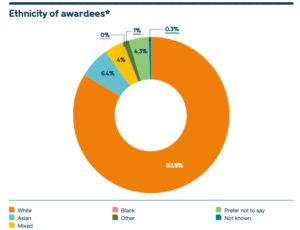 in Fig.5 the award rate by ethnicity; 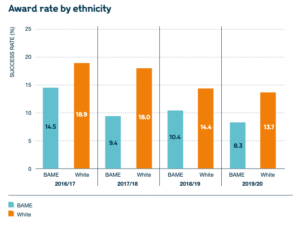 and in Fig.6 the percentage of disabled awardees. 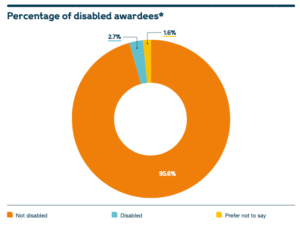 Other highlights on EDI, as well as some alarming statistics, emerging from this report included the following information:

Moreover, the Wellcome Trust also shared data on their own staff population as listed below:

It is positive that the organisation has interrogated their own staff demographics and this provides some insight into their willingness to be accountable internally rather than simply seeing the lack of diversity as an issue outside of their own institution. To proactively address their commitment to reinventing research culture and promoting more widely and successfully EDI, at the end of the Reimagine Research Culture Festival, the Wellcome Trust also launched their Diversity, Equity and Inclusion Goals and Strategy. In relation to this, Dr Beth Thompson commented: “We’re not doing as well as we need to be doing. But we have a plan and a great team to follow it through. We already know a lot about what needs to change and why. We need to care about how research is done. This will help us fix the system so it serves more people, rather than fixing people to fit a broken system. We will support the new mindsets and habits we need.” The Diversity, Equity and Inclusion Goals and Strategy team is led by Dr Lauren Couch (@Like_the_sofa) and its strategy sets out three commitments that Wellcome aims to meet by 2031 at the latest:

(1) Be an inclusive employer;

(2) Be an inclusive funder;

The full strategy is available at this link.

Overall, the Reimagine Research Culture Festival was very successful in terms of accessibility as well as very promising in terms of policy change. We very much look forward to seeing these changes happen, as promised by the Wellcome Trust. And we hope to see the same/similar actions taken also by other major funders and institutions to promote proactively a better research culture and more equality, diversity and inclusion in academia.

A detailed report about “What Researchers Think About The Culture They Work In” by the Wellcome Trust is available at this link.  All the statistics and quotes cited in this blog are contained in videos and/or reports which were made publicly available by the Wellcome Trust during and after the Reimagine Research Culture Festival. The recorded sessions of the Festival can be re-watched at the following link: https://wellcome.org/what-we-do/our-work/research-culture.

This blog was written by Dr Giulia De Togni (@giulia_de_togni) with helpful feedback from Nicola Cuthbert, Alex Peden, and Dr Katie Nicoll Baines. Giulia is a postdoctoral research fellow based at the Centre for Biomedicine, Self and Society – Usher Institute – Edinburgh University Medical School. She is currently on secondment at the Institute for Academic Development (IAD) for the project ‘Strengthen support for managers and PIs of research staff through training and online resources’ (Researcher Development Concordat plans) (February 2021 – July 2021). This secondment has a particularly strong commitment to promoting a better research culture and EDI in academia. Giulia is also supporting continued work on the ‘AI and Health: Exploring Affect and Relationality Across Three Sites of Intelligence and Care’ project (May 2019 – January 2021), which was fully funded by the Wellcome Trust [213643/Z/18/Z].

The Fig.1-5 used in this blog can be attributed to the Wellcome Trust.

[1] In relation to the label ‘BAME,’ Wellcome wrote: “We are using the term BAME as this reflects how we collect and aggregate our data, which is based on UK census categories – but we acknowledge the limitations of this term and expect our approach will continue to evolve.”

“It’s Time to Build a Better Research Culture – One That is Creative, Inclusive and Honest” / IAD4RESEARCHERS by blogadmin is licensed under a Creative Commons Attribution CC BY 3.0

The views expressed here are the author’s own and do not represent the views of the University of Edinburgh.