Geological tidbits around Edinburgh, from the building stones to Arthur’s Seat 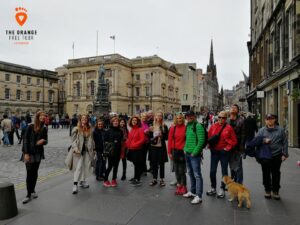 I lived in Edinburgh for over 5 years. I experienced a great overview through the city. I took part in the various art festivals, I went to local geology field trips and joined a great deal of local and national geology societies. 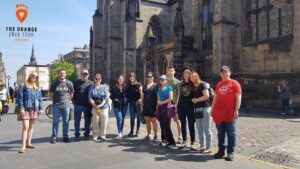 The University of Edinburgh is an important part of the city. It played a key role in its history and contributes so much to the local economy. The students call the city their home where they spend most of their leisure time. In this blog post I plan to share my favorite places that are well worth a visit and bring a person closer to Edinburgh. 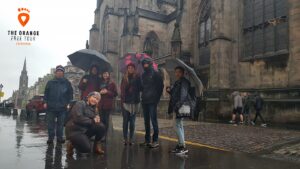 The Scott Monument is a beautiful piece of architecture dedicated to the world famous poet and novelist Sir Walter Scott. The spire has a museum inside dedicated to literature and to the history of the monument. The monument is partially hollow so a spiral staircase leads to the top providing beautiful views of Edinburgh.

The park and the hill provide a great playground to a geologist. Arthur’s Seat use to be a cone of an ancient tropical volcano while the Salisbury Crags were formed by an old volcanic dyke being exposed by glacial erosion. On the side of the hill volcanic intrusions are visible with a chance to find fossil fish or fossilized wood.

The Park provides a great place for walking and jogging. Due to its elevated height the entire park offers great views all around. Arthur’s Seat is easy to climb and it is very rewarding. The top makes you feel like the king of Edinburgh. The Scottish Parliament is attached to the park. It is well worth a visit to see its modern architecture and get a peak of the place where laws are made. 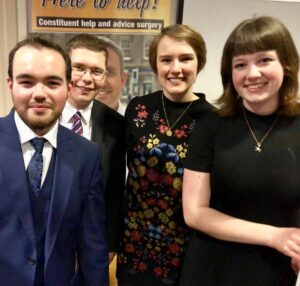 Hunor Deak with the Liberal Democrats

Edinburgh Castle is the crown jewel of the city. Since its construction it played centre role in city politics and witnessed great historic change. Enemy sieged it many times and Kings ruled Scotland from behind its walls. It is home to the Scottish Crown Jewels. The Scottish Crown jewels were hidden at the castle until Sir Walter Scott found them in a hidden room in 1818. From that year, till today the jewels are displayed at the castle in a vault. The Castle is a great tourist destination with a military museum and a chapel. Every day (except on Sunday) at 1.00 pm an old military gun is fired which can be spectated from the Castle.

Scotland’s biggest museum is dedicated to human knowledge and Scottish history. It hosts many great exhibitions ranging from the industrial revolution to micro-biology. My favorite part is the geological exhibition and the T-Rex on display. The museum allows you to stare strait at the jaw of the T-Rex. It gives an idea how massive the beast was. The geological exhibition hosts many rock samples and holographic projections providing plenty of information. The museum has a great gift shop with books that serve as memorable souvenirs.

The place is the most vibrant part of Edinburgh. The ancient cobble streets are lined with street stalls and entertainers who bring joy to anybody’s heart. There is always somebody in a kilt who plays the bagpipes giving the place a unique atmosphere. The place is home to the Hearth of The Midlothian where in the past public executions took place. It is easy to book a foot tour there which takes you around the city connecting graveyards and pubs. The somber and the merry.

The National Gallery of Scotland

The place is a proud home to art starting from the 12th century till today. The paintings contain classics from artists like Raphael, Tintoretto, Titian, Poussin, Vermeer, Claude Lorraine, Rembrandt, Reynolds, Van Gogh, Gainsborough, Chardin, Gauguin, Antonio Canova and Turner. Everything is there from medieval classics to iconic Scottish paintings of the 19th century. The gallery is home to many great marble sculptures depicting people like Sir Walter Scott. The place is a great free afternoon out.

Coincidentally The National Gallery of Scotland is on Princess Street. Princess Street is the shopping capital of Scotland. World famous brands populate the street bringing the fashion of Paris and New York to Scotland. It is a great place to shop, especially with the views of the old castle and the views of the old railway station. At Christmas time a German market with a Ferris Wheel rises from the park. When the Fringe festival is on, the local parks play host to workshops and performers. When the sun is out the place is the best place in the city for sunbathing.

At last, but not at least my favourite shop in Edinburgh. The little shop is located just opposite to the World’s End pub. It primarily sells jewellery, but it has an amazing selection of fossils and crystals. The shop sells amethyst fragments, tourmaline strands in quartz, faceted garnet crystals and fossils of all kinds ranging from trilobites to ancient fish. The rocks and minerals are sourced from all over the world from Argentina to Siberia. Stones from the Scottish Highlands are plentiful. The staff is very nice and very helpful.

Edinburgh is a great city to visit with great museums and lovely parks. I hope after reading my blog and seeing my pictures you will gain a great interest in the city and go off exploring. 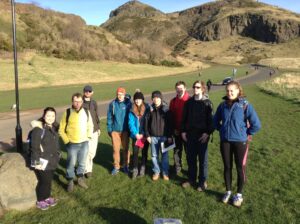 Hunor Deak with the meteorology club

I attended a lot of societies. I took part in a lot of politics. I attended meetings by the EU Society and took part in Lib Dem campaigning in elections. This provided me with great opportunities to meet new people and learn from them.

Geological tidbits around Edinburgh, from the building stones to Arthur’s Seat / Working & Learning at the University of Edinburgh - Student Ambassador, Geologist, Red Lichtie by blogadmin is licensed under a Creative Commons Attribution CC BY 3.0

Hunor Deak in the Lab: Working in the geology laboratories of the University of Edinburgh