The importance of having themes in seminar programmes: Variable magma and carbon fluxes at mid-ocean ridges and on Iceland; glacial/interglacial cycles & Why are changes in climate and ice dynamics important for marine ecosystems?

The School of GeoSciences hosts a wide range of seminar series which helps the students learn more about their chosen topics, helps researchers network and the events are open to members of the public. The seminars cover a wide range of topics from human geography to the volcanoes on Venus.

What Seminars are on Offer?

Global Change usually takes place at the Crew Building on a Wednesday, being hosted by mostly ecologists and environmental scientists. It focuses on subjects closely connected to the biosphere of the Earth and how it interacts with the other spheres (such as the cryosphere or the atmosphere). Most of the lectures focus on short term change, change that can be observed within human lifetimes.

Earth and Planetary Science is presented by geologists and geophysicists at the Grant Institute, usually on Thursdays. However, the EPS invites guest organisations for talks such as the Edinburgh Geological Society. EPS focuses on geology, hard physical sciences and unlike the other two it tackles topics connected to other planets within and outside of the Solar System. The seminars are dedicated to the mysteries of the Earth.

Hutton Club leans more towards full geography and the humanities, the talks take place at Drummond Street in the Old Library. While EPS and GC discuss subjects such as Climate Change and the mining industry, they shy away from the moral questions. It is rare to see those seminars consider ethical behaviour. The Hutton Club stands in complete contrast to the EPS seminar. It is a much more open minded institution, leaning towards subjects that are not deeply entrenched in geosciences. Lot of guests dare to ask the hard questions and rarely do arm waving by declaring an idea a “controversial topic”. Hutton Club hosts a lot of talks where the human application of geosciences is presented. For instance, GIS lectures move away from the technicalities of the software and explore how local communities are kept safe from natural hazards. 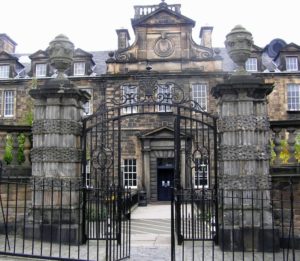 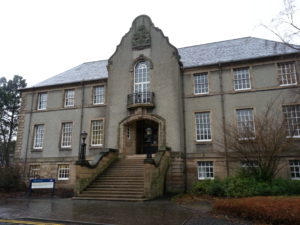 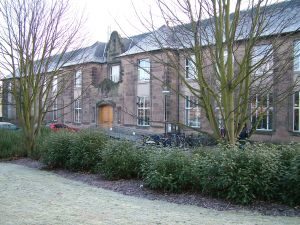 The questions of controversial topics

To the point made above: It is very easy to escape scrutiny by describing something as controversial. When a hard question gets asked, one can easily eliminate a debate by pushing the topic out of the bounds of discussion by the single declaration of it being “controversial”. For the Conservative Party, compassion is a controversial topic, for the Labour Party abuses by left-wing communist dictatorships are controversial, for the Liberals it is the Coalition while for the SNP, austerity caused by independence. Anything can be controversial if you don’t want to discuss it, as the answers might lead to uncomfortable places or reveal inconvenient truths.

Dr David Rees Jones from the University of St Andrews – Variable magma and carbon fluxes at mid-ocean ridges and on Iceland; glacial/interglacial cycles

David is a highly esteemed mathematician and geoscientist. He studied and worked at Oxford and Cambridge. Currently he is a lecturer in applied mathematics at the University of St Andrews. He uses his vast knowledge in mathematical analysis and computer simulation to understand geophysical and environmental fluid flows under the crust and deep within the Earth. He works on understanding the formation of sea ice in the polar regions.

David’s seminar focused on his mathematical understanding of the processes of mantle flow, how they are affected by the glacial cycles, climate cycles and how that leads to a change in the flux of CO2 at mantle ridges. Ultimately he is trying to understand how CO2 emissions affect the climate and how CO2 transported by water back into the crust changes the magmatic system underneath. This system is influenced by climate based factors as water is exchanged between the oceans and the ice sheets. This changes the loading of the crust on the mantle. (1.) When the ice sheets grow continental crust gains mass, increasing the rate of subduction. When there is an ice sheet loss the mass of the oceans increases increasing loading on the ocean crust. Consequently, glaciation takes a longer time than ice sheet loss. Carbon production from volcanic sources acts as a pacing mechanism for Pleistocene glacial cycles. David used a study from Iceland to prove his point. Dr. Isarapong Eksinchol and his team sampled Icelandic lavas and checked the lavas’ Rare Earth Element content to see the timing of episodes of volcanic activity. They detected a time lag between de-glaciation and volcanic activity. The erupted lavas were depleted by 70% of REEs, which suggests a massive change in melt ascent velocity. (2.) Previous models assumed this to be at a constant rate, therefore the idea that continental loading affects mantle processes by ice sheet changes is correct.

1. – Consequences of glacial cycles for magmatism and carbon transport at mid-ocean ridges

2. – Rate of Melt Ascent Beneath Iceland From the Magmatic Response to Deglaciation 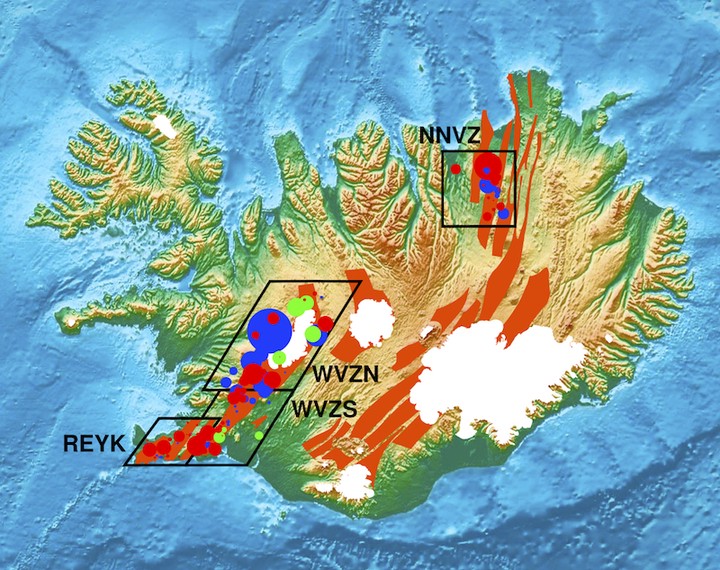 Glacial cycles involve the transfer of significant quantities of water between the continents and the oceans.

Dr Sian Henley – Why are changes in climate and ice dynamics important for marine ecosystems?

Sian is a very talented lecturer in Marine Science at the University of Edinburgh. In the second year of my education, I attended her lectures on ocean-based ecosystems and on coral reefs found around Great Britain. She is a very entertaining speaker capable of explaining large scale topics and complicated systems in a relatively easy manner. She is an award winning scientist with multiple research trips to the artic regions. Her research interests are in polar ocean biogeochemistry and biogeochemical cycling in the Arctic.

Sian’s seminar focused on climate change around Antarctica, how that affects ocean circulation, the health of glacier shelves surrounding the continent, its impact on the food chain and the future of species living in the water columns of Antarctica. The seminar highlighted Sian’s work on the icy seas with a multinational scientific team. Projects like these highlight the importance of international collaboration. The centre piece of the project focused on CO2 in the arctic oceans and its relationship with a changing food chain. CO2 absorption at the ocean surface is not a global uniform. Cold water can absorb and dissolve more CO2 than warm water, therefore Arctic waters are major carbon sinks. About 40% of anthropogenic CO2 is absorbed by air-sea exchange. A greater amount of CO2 leads to more intense and earlier Ocean acidification.

Antarctic glaciers are more likely to melt due to warmer waters rather than warm air. The more heat absorbed in the oceans, the faster the rate of melting is. Channelized underwater currents help to further this process. This has mostly negative effects on the food chain. The different nutrient and temperature levels lead to a change in the composition of the phytoplankton species which in turn impacts the higher order consumers such as fish species leading to a change in the composition of the penguin species. Sian noted that due to the decline of ice and increasing temperatures the number of penguins favouring colder temperatures is declining while penguins more suited to warmth have experienced growth in their numbers and territory.

However there is negative feedback cycle present increasing the absorption of CO2.

The decline of sea ice leads to extra input of nutrients including iron. A lot of ancient sediment is locked up in arctic glaciers. Once the ice melts all that sediment is released into the water column including iron. This leads to an increase in the primary production. This in turn increases the carbon sink potential of marine biota, allowing the deep ocean to be a carbon sink.

Why Are Glaciers Melting from the Bottom? It’s Complicated – Scientific American 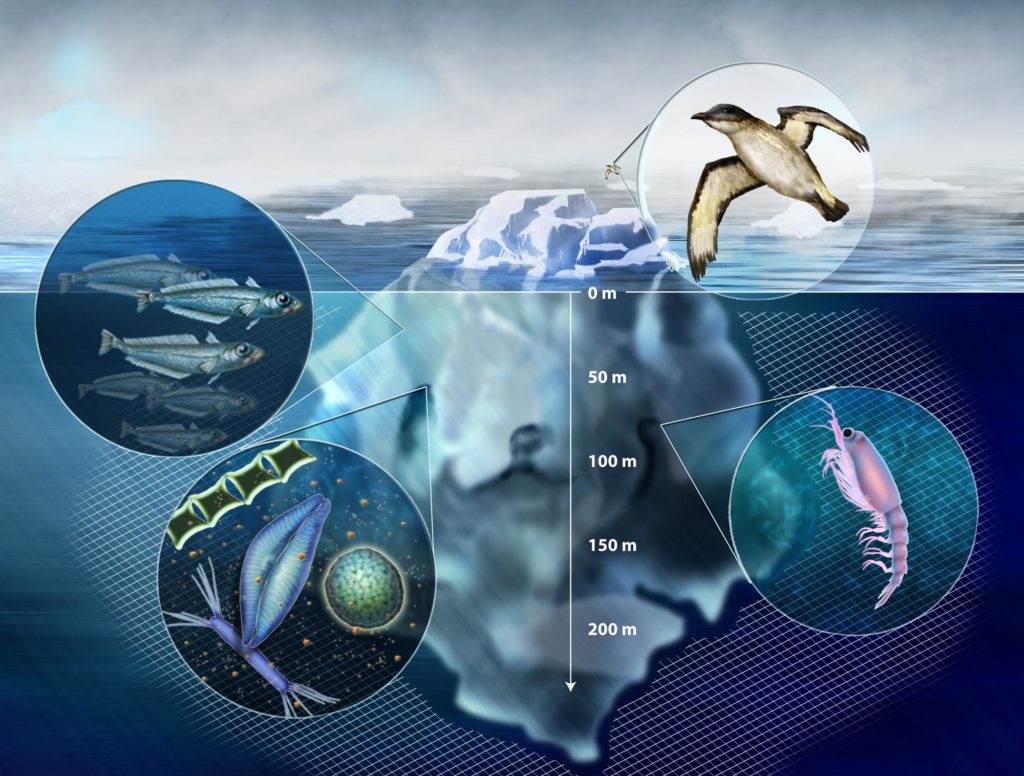 The two seminars highlighted a crucial point when it comes to the climate change debate: It is important to differentiate between natural release of CO2 and CO2 produced directly by human activity. In the general media only the Anthropocene emissions are focused on. The two seminars are a good contrast to each other. General media had the problem of presenting all of CO2 as bad and/or dangerous. It is very useful to understand that CO2 plays an important role in the climate system, in the deep Earth system and it plays a major role in keeping Earth (including the oceans) habitable.

The importance of Themes

It would be a good idea to have seminars attached to themes. Each week should have a theme, on which the seminars are built. This would help with examining a topic from multiple angels and from the point of view of multiple fields. The two lectures above are a brilliant example of this. The first seminar was an EPS one, the second seminar was by the Hutton Club. Both seminars focused on climate change yet the first one looked at how natural processes shape it, while the second one looked at the consequences of human emissions. David’s seminar focused on long term cycles of change, on a planet wide scale, while Sian’s seminar looked at short term change in specific regions. Having a theme would enable students to closely examine a topic and ask thorough questions.

Poem: They were here before Us

This poem focuses on the ever present problem of climate change and the lack of response to it by past governments. I wrote this up under a single bus journey from Leith to Calton Hill:

A great white mass sits over the Alps,
It covers the Antarctic, reflecting the sun,
Yet it is under threat by the heat of collapse,
Till now our Empires did not see the pointed times.

We are in a midst of great change,
As the food-chains of the ocean crumble, (one by one),
This truth we try to outrun as for it was a joke of hoaxes,
Yet we are not laughing now…

The importance of having themes in seminar programmes: Variable magma and carbon fluxes at mid-ocean ridges and on Iceland; glacial/interglacial cycles & Why are changes in climate and ice dynamics important for marine ecosystems? / Working & Learning at the University of Edinburgh - Student Ambassador, Geologist, Red Lichtie by blogadmin is licensed under a Creative Commons Attribution CC BY 3.0