My Travels Around Scotland: Arbroath

Arbroath is a small town situated between Dundee and Montrose on the Scottish east coast. I might be biased a bit since I lived there for the past 5 years. However I travelled Scotland quite extensively from the geological wonders of the Isle of Skye to the multicultural streets of Edinburgh. Even so I couldn’t find any place similar to Arbroath. Arbroath is a brilliant mixture of geology, history, cuisine and beautiful beaches (if you know where to go). The place provides something for everybody. 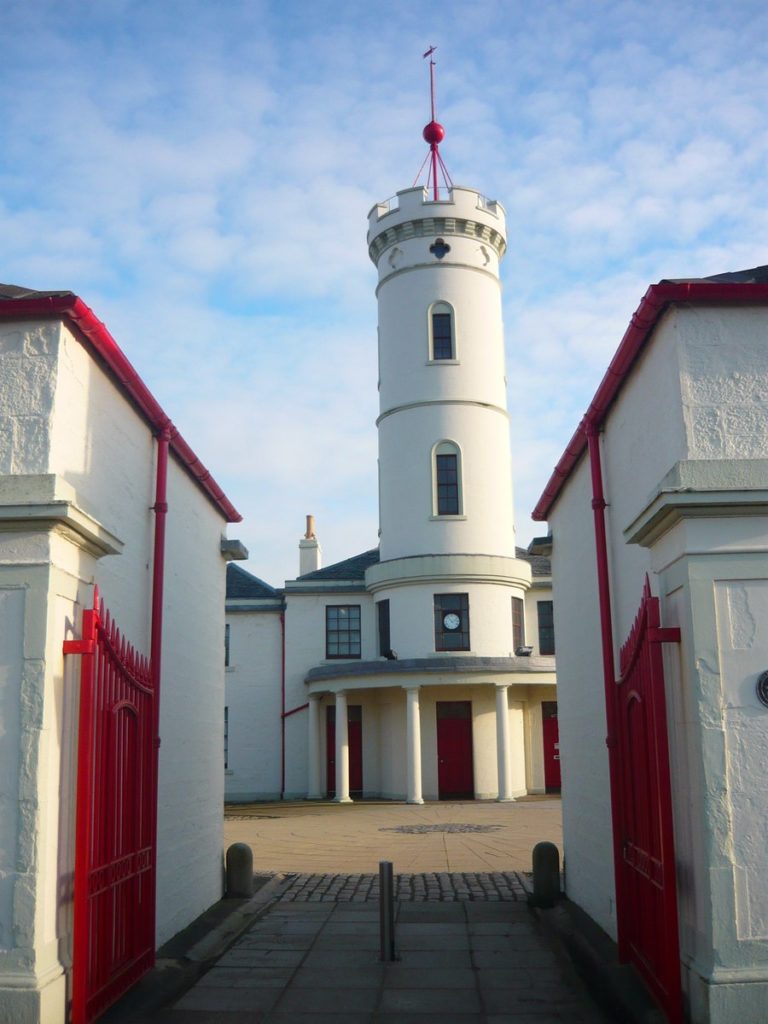 Arbroath is a treasure trove of history. It contains buildings and museums showcasing the entire history of Scotland. St Vigeans offers us a window to the ancient past of Scotland when the Picts roamed the land. Digs from the nearby sites provided evidence of human inhabitants going back as 3500 BC. The Arbroath Abbey tells a tale of Scotland as a free nation. It is pleasant to know that the US Constitution can be traced back to Arbroath to a time when a giant cathedral dominated the landscape. The Declaration of Arbroath was always a special document as it hinted on the idea that the king cannot rule the land without the consent of the lords. The Hospitalfield House stands as a testimony to a nation that loves and cherishes fine art. When you walk through the front gates you are taken back to a time when Scotland was part of an empire with people who collected and protected artefacts. The Signal Tower with its wonderful museum presents a town that was founded on fishing and trade. Its exhibitions tell tales of shipwrecks, pirates and of simple people who made their living of the sea. Along with all this history, the museum shines a light on a feat of engineering that stands as a beacon for the industrial revolution: The Bell Rock Lighthouse. This structure stands tall above the water as a symbol of Scottish ingenuity. It shows that people here can overcome everything what nature throws onto their way. The lighthouse looks majestic especially by way of a boat ride. (If you get lucky you might spot a couple of dolphins surfing the water). The history trip doesn’t end there: the town also has an artefact from the Cold War. Right above the caravan parks, tucked in a little forest the town has its own nuclear bunker. If you know the people who manned it, they are more than happy to take you to their cramped underground quarters. The bunker serves as a reminder of the horrors of a possible nuclear war. 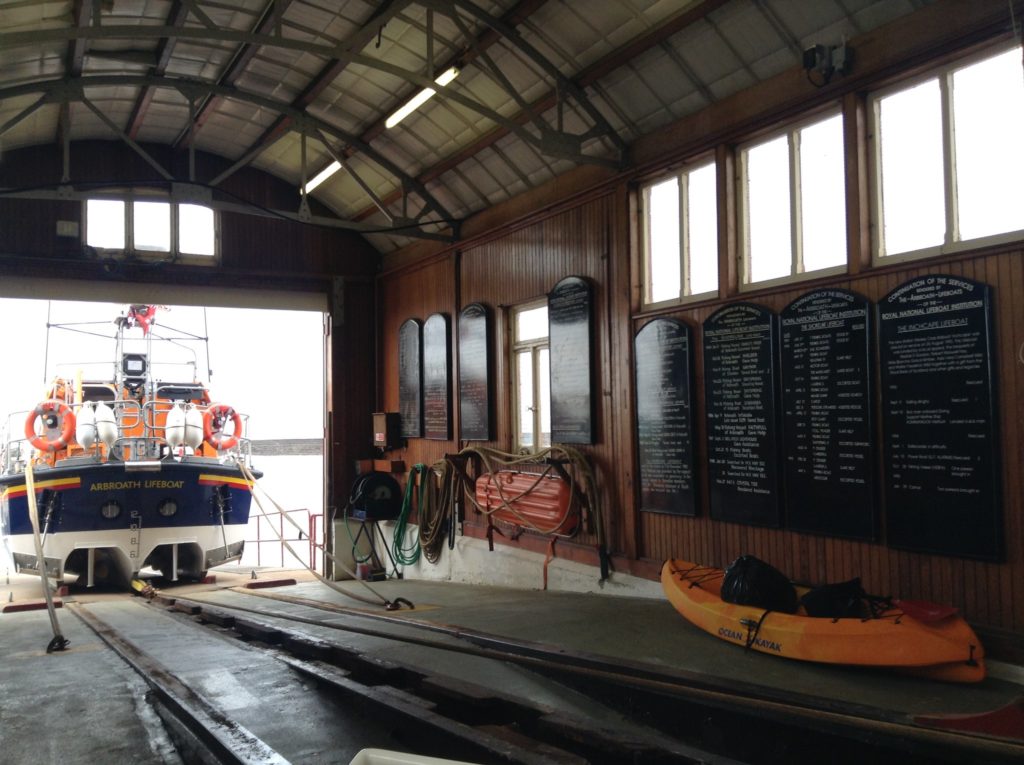 Arbroath is not just for the history buffs. The town has been a holiday destination for a long time because of its beaches and sandstone cliffs. It is always a joy to go to the harbour and grab some smokies or fish and chips after a long day of walking among the cliffs (Irn-Bru and ice-cream from Marco’s is also a great way to close a day). As a person who studies geology I find the cliffs fascinating, they tell an amazing story of how billions of years ago Arbroath was located in a middle of a hot, arid desert. The conglomerates in the cliffs inform us of cataclysmic floods taking place in the upper Devonian periods. The cliffs provide all forms of examples of different geological formations from synclines to reverse faults. The beaches are covered with all forms of igneous and metamorphic rocks brought there by ancient rivers. In my past years I have collected several of them including sandstone xenoliths in lava, granite touching bedrock with the baked margin visible, just to mention a few. The cliffs and the beaches along with their geology provide the walker with spectacular views. Taking all the dates in consideration I personally can recommend watching the sunrise from Needle E’e, a spectacular sandstone arch.
Arbroath has plenty of other lovely oddities like Kerr’s Miniature railway running in parallel with real trains. The waterfront is wonderful with plenty of fishmongers and with a beautiful working harbour. The harbour has its own lifeboat station with a working museum showing a glimpse of the rich history of the RNLI.
Overall, Arbroath is a great town to visit and a great town to live in. This place is deeply rooted in history and geology. 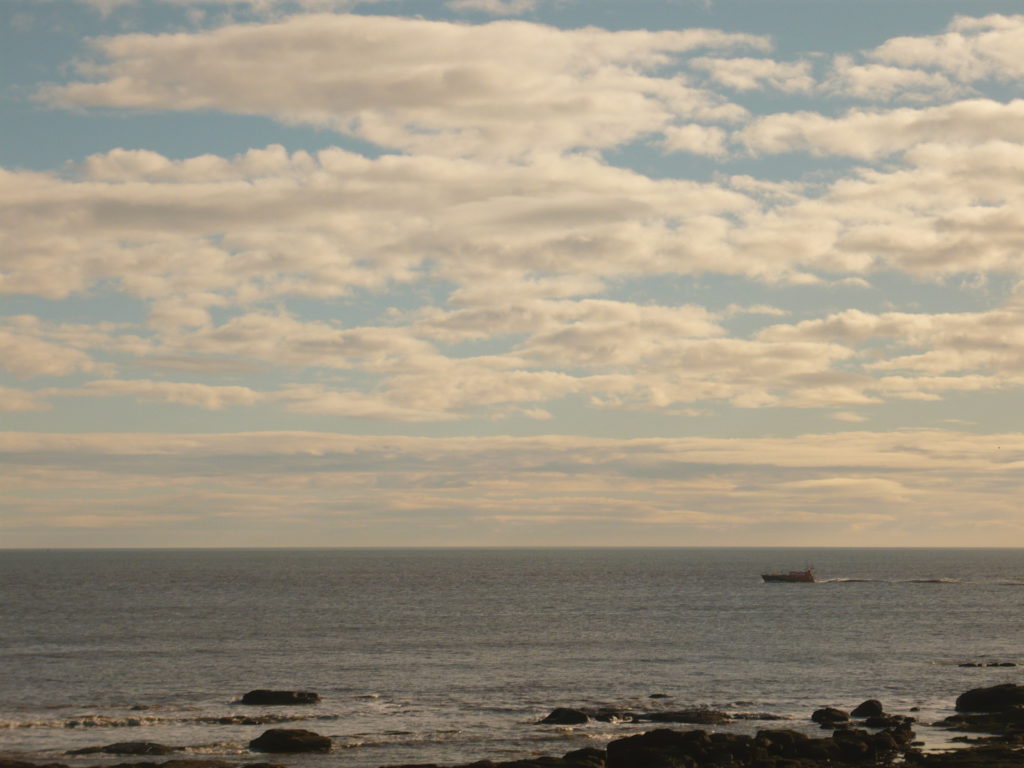 The North Sea from Victoria Park

My Travels Around Scotland: Arbroath / Working & Learning at the University of Edinburgh - Student Ambassador, Geologist, Red Lichtie by blogadmin is licensed under a Creative Commons Attribution CC BY 3.0