The title of this blog pays homage to (or should I say ‘waves at’?) the classic text by the psychologist, Elisabeth Kubler Ross, first published in 1969 and in print ever since, read by successive generations of students of psychology, nursing, medicine, and of course, social work. I first read the book in 1980 when I was a Master’s student at the University of Edinburgh. It is fair to say that this book, along with a very few others at the time, changed how I thought. I understood for the first time that death was, and should be, a part of life; that we needed to open up conversations about death and dying, not leave it to ‘experts’, or hide it away in medical institutions. Many years later, I had the privilege of working with Sally Paul, a PhD student, now Lecturer in Social Work at Strathclyde University. Her thesis, completed in 2015, described her action research project ‘Let’s Talk about Death and Dying’, in which she worked with children to develop tools for death education in primary schools in Scotland. Her work as a hospice social worker had taught her that children needed to be able to talk about the taboo subject of death. She argued that our wish to protect children from hurt would only cause them more lasting harm.

But I digress … (The wonderful thing about writing a blog rather than an academic paper is that you can wonder off the main subject and back again with impunity!)

One of the important messages from Kubler Ross’s book was that loss and bereavement are not one-off events, over and done with in a specific (and probably short) time period. Instead, she pointed to the various stages we go through, and often return to. Death and dying are, in many ways, lifelong processes. And it is this awareness that I now take to my emigration story. In the life of George Robertson Nicoll and his family, there are countless deaths and losses, some remarked on by George in his journal (The Life and Adventures of Mr George Robertson Nicoll), and some not. There is also physical evidence of some bereavements (in the form of gravestones, death notices and obituaries) but not others. And the times when deaths go unrecorded are, to the social historian, as interesting as the ostentatious displays of grief that adorn some of the various memento mori.

So to George Robertson Nicoll’s story. The first, and possibly most significant, death that he experienced was that of his mother in 1831, when he was just eight years of age. This loss devastated him, and changed the course of his life, as his father subsequently remarried and his place as ‘baby in the family’ was usurped by a new, much treasured child to father James and new wife Helen. Listen to how George describes this in his own words:

‘I was very ill about Mother’s death and did not know till afterwards the want of a Mother’s care. I was taken into the room where her dead body was laying stretched out on a broad deal board, her face wore a smile and her cheeks were as red as a rose, as when in life, next night I was called in the room to see her coffined, or as they called it then, chested, the coffin was laid on the floor, and then the body was placed in it. […] I was then eight years and three months old, too young to be left without a Mother, two days after she was buried in the Old Howff, Dundee, in her Mother’s grave, my Grandfather Robertson being twice married. It was a sad day when I saw the funeral leaving the house for I was kept at home, there was a large gathering, no hearses or mourning coaches in Dundee then, to my knowledge. The coffin was laid on two back wooden spokes and carried by eight of the mourners and friends of deceased and an officer, generally one of the sheriff’s men, dressed in a black cloak or gown, with a large black cocket hat, and a long black stick or rod walking slowly and solemnly in front, and the procession of friends following in the wake. […] After Mother was buried, there seemed to be a great want in our house. We missed her very much, as we had no one to advise and direct us.’

It is the detail that is so moving in this account – I am particularly touched by the description of ‘the black cocket hat’, and the fact that George was expected not only to see his mother’s body, but also to watch while her body was placed in the coffin. This seems very far removed from today’s Western expectations of rituals around death. George’s mother died of ‘consumption’, that is, pulmonary tuberculosis (TB). She was only 37 years old. TB was a major cause of death in Scotland in the 1800’s, particularly in the densely-populated parts of Glasgow, Edinburgh and Dundee, where sanitation was non-existent and whole families lived in single rooms in a tenement building. This was not the case for Margaret. She and her family were living in Campbell’s Close, off the High Street in Dundee, in rooms that would have been considered of a decent standard for the time. And yet TB was not only a condition that affected the lower classes. On the contrary, the ‘great white plague’, as it was called, was epidemic in Europe during the 18th and 19th centuries and caused millions of deaths (Frith, 2014). Margaret may have been exposed to infection in a number of places, including the many churches she was keen to frequent.

I don’t think it is an exaggeration to suggest that Margaret’s death must have played a part, albeit indirectly, in George’s later decision to emigrate to Australia. At the very least, her death reduced the ties he felt to family, Dundee and Scotland, making more possible the very idea of emigration. Unlike many migrants to Australia, George and Sarah were the first people in both their families to make the long journey to the other side of the world (Richards and Templeton, 1998). They did so as ‘assisted migrants’, paid for by the colonial government of New South Wales.

This was not, of course, the only death that impacted deeply on George. Over the course of the next 70 years, he lost his grandparents, parents, brothers and three more children, including his youngest son, David, who died (also of tuberculosis) in 1885 in Sydney at 18 years of age. Such a catalogue of loss might lead us to imagine that George would have been used to death by now; that death would have somehow become an acceptable part of life, as the historian Philippe Ariès (1974), has suggested. But nothing could be further from the truth, as the anguished inscription on David’s tombstone demonstrates:

My David is laid in his dark lonely bed And the cold earth now covered his beautiful head He is gone – gone for ever No more will I see The dear loving eyes that look’d kindly on me. I asked for his life and continued to pray To my father in heaven by night and by day. My wish was not granted and we had to part The pain and the agony sunk deep in my heart.

Oh sad was the parting His last heaving sign I kissed his pale lips And he breathed his goodbye My pitying saviour For thine own name’s sake Oh shelter, uphold me, Or this heart will break.’

David’s death, far from being routine, was a tragedy for his parents, bringing to the surface other long-submerged losses. Soon afterwards, George’s wife, Sarah herself died in 1897, while George was back in Scotland visiting other family members. She had stuck with him through thick and thin, and by the time she died, she was living with their son Bruce Baird and his family in Sydney. George does not comment on her death in either his book or his journal. And this is what I would now like to consider in a little more detail – why are some deaths noteworthy and others not so? What might this tell us, is anything, either about the status of the person, or the relationship with the bereaved person?

Let us now consider this by comparing two very different presentations of death: George and Sarah’s eldest son, George Wallace, who was buried at Rookwood Cemetery in Sydney in 1906, and their last surviving son, John Baird, buried at the Field of Mars, Rhyde in 1938. 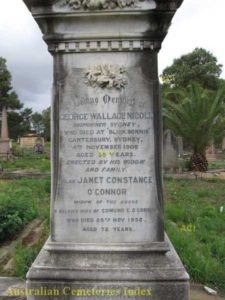 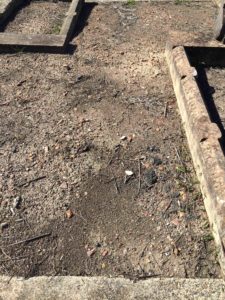 George Wallace’s grave is, as we might expect, a monument to a successful businessman, ship-owner, politician and generally upright citizen; John Baird’s in contrast, is an unmarked grave. At the time when he died, the Nicoll family fortune, in as far as his inheritance was concerned, had disappeared. How could this have happened in the space of just 30 years? Did none of the other family members who were still alive care enough to pay for a stone to mark John Baird’s passing?

So here we have it – the story of family members who prospered and perished, lived and died, supported each another and yet left one of their own to struggle. There are echoes too, of George Robertson Nicoll’s half-brother William, who died destitute and alone, in the Dundee poorhouse hospital in 1900.

Families. We cannot make any assumptions.

But to return to where we began – the impact of loss and bereavement. My preferred story is that George does not write about Sarah’s death in the end because he cannot bear to do so – she was, quite simply, the anchor that held him throughout his 50 years of travelling the globe, and without her, he was lost. Or have I read too many love stories over the years?