This emigration project has been in my thoughts and dreams for more than 20 years. After my sisters and I cleared our family home in Dundee, Scotland, in 1997, following my parents’ deaths, my mother’s cousin asked me if we had come across a “little red book” written by one of our forebears about his travels around the world. I had never heard about this before, but set out to see what I could find, and I have been on the case ever since, most recently following retirement from the University of Edinburgh.

The book, Fifty Years’ Travels in Australia, China, Japan, America Etc. was written by George Robertson Nicoll and printed in 1899 in London by Hazell, Watson & Viney Ltd. In the Preface to the book, G.R. Nicoll writes:

‘At the request of numerous friends I have decided to print only a few copies of this book – a narrative dealing with fifty years of my life spent in Australia, and travels to other parts of the globe. The book has been written, and is intended, for private circulation only. It contains no exaggeration, but is simply a plain statement of the varied experiences I have met with.’

George Robertson Nicoll was a distant relative from my mother’s side of my family; his eldest brother James Robertson Nicoll was my great great great grandfather. George was born on 11 October 1824 in Dundee.  Like his father before him, he was a time-served block, mast and pumpmaker. He married Sarah, a power loom weaver in one of the city’s linen mills, on 17 August 1846.

The starting-point of George’s autobiographical narrative  is 17 March 1848, as he leaves London on the Royal Saxon, bound for Sydney. He tells us that the ship carried three hundred passengers; it stopped off at Plymouth to collect provisions before heading out to sea. From here on, we read about George’s experinces over the next 50 years. So we learn that he initially worked as a shipwright on boats at the docks in Sydney, but soon after, headed for the gold-fields in California and then later Australia, first north of Sydney and then north of Melbourne. He tried his luck at farming, then shipping, and latterly, house-building. There is brief mention of the presence of a wife and also of children being born, as well as stories of a trip back to Dundee in 1858 and subsequent return to Australia. By his early 60’s, George, now wealthy, began to travel the world, not as a migrant, but as a tourist. The remaining two-thirds of his book (almost 150 pages) is a tourist’s recollection of all the places that he visited in the period between 1887 and 1897, sometimes travelling with other family members, but often travelling alone.

Twenty-five copies were printed of Fifty Years Travels.  A copy given to my great grandmother (inscribed ‘to my niece Christian’) has disappeared; all I have is a photocopy of the title page, which was found in papers after my mother’s death. Three copies are held in libraries in Australia: at the National Library of Australia in Canberra, at the Mitchell Library in Sydney and at the University of Melbourne Library. The National Library of Scotland has a microfiche copy of the book, inscribed ‘to my niece Maggie’, and I paid for a photocopy of this for myself and my mother’s cousin in 1997. I read the script with amazement, and began the process (mainly online) of finding out more about this previously-unknown family story. I also tried, without success, to locate a copy of the book for myself. In tandem, the husband of my mum’s cousin spent many hours in local history archives in Dundee, as he set about the job of identifying the family tree.

I visited Australia twice in the years that followed. On my first trip, when I held the ‘little red book’ in my hands for the first time at the Mitchell library in Sydney, I felt nothing but admiration for this skilled craftsman who had had the self-assurance to write down his story for others to read. On my second visit, I travelled to Paddington in Sydney to see the houses that George had built; sadly, they no longer exist. I also looked up the Sydney phone book, finding many Nicolls to whom I might be related. I accessed the book again, this time at the University of Melbourne library, and took notes about gold digging and Mount Alexander. I then put the story to one side, for a time., as I told my family and friends, when this would become my ‘retirement project’.

I finally started again in earnest in early 2019. I re-read the little red book, and did another (unsuccessful) online search for copies that might have turned up for sale. While doing so, however, I was reminded that the National Library of Australia also has a copy of a manuscript, The Life and Adventures of Mr. George Robertson Nicoll. The library catalogue records that this as follows:

Manuscript of “The life and adventures of George Robertson Nicoll”, which was published as “Fifty years’ travels in Australia, China, Japan, America, etc. 1848-1898”. Also included is a 40 page journal of a cruise through the Pacific Islands in 1902 by J. B. Nicoll.

I had initially taken this description at face-value, thinking I would check it later on a visit to Australia. Then I wondered: what if it contained information about George’s early life that would be useful to me now? I therefore paid for a copy to be sent to me by email. When it arrived six weeks later, I found that, attached to the manuscript, was a copy of a letter, dated 16 June 1938 and written to Mr. J.B. Nicoll by the Mitchell librarian, Ada Leeson. In this letter, she acknowledges receipt of the manuscript and says that she has compared it with Fifty Years Travels, which was already in stock. She writes that because the one follows the other ‘pretty closely, there does not seem to be sufficient extra material in the manuscript to warrant my making you an offer for it’.

So this letter gave two new pieces of information. Firstly, we have the source of the suggestion, repeated in the library catalogue, that this was, in effect, a manuscript of the book, Fifty Tears Travels, with the addition of an extra tourist journal written later by J.B. Nicoll. But more intriguingly, there is evidence that George Robertson’s only surviving son (John Baird Nicoll) had tried to sell the manuscript to the library. The fact that it is still in the library today indicates that he was unable, on receipt of the letter of rejection, to go back to retrieve the manuscript. John died in August 1938, which presumably explains why the manuscript is still in the library’s possession today.

When it arrived, the manuscript, in contrast to the catalogue description, turned out to be a real treasure. Although much of the its 368 hand-written pages are indeed a slightly extended version of Fifty Tears Travels, the first 30 pages or so tell us about George Robertson’s early life in Dundee, answering many of my questions about his upbringing, schooling etc. It was therefore a real gift to my project, and an important reminder of not taking other people’s views for granted. 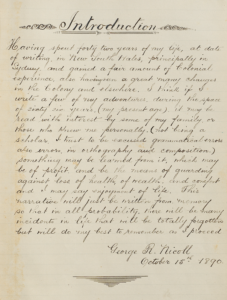 What we have in Fifty Years Travels, and in the manuscript, The Life and Adventures, is an amazing first-hand account of travel. Reviewing the book in the NLA News in July 2003, Judy Cannon applauds its vivid accounts, written at a time when only the ‘wealthy and leisured’ could travel. She reminds us that very few travellers reached China and Japan at this time, then known as ‘the Far East’. But the book and manuscript are much more than this. This is a ‘real life’ account of someone who lived through a time of major social, economic and personal change between 1824 when he was born and the end of the nineteenth century. George and Sarah epitomise the two pillars of Dundee in the 1840’s: shipbuilding and linen weaving. Their story is one of bravery and struggle, success and failure, achievement and disappointment. It is also a story of loss: loss of status, money, gold, and also cherished family members – parents, siblings and children.

The blogs that follow will focus on George’s autobiographical narrative, and place this, as far as is possible, in its economic, social and cultural context.  I will draw on the findings of my own research and also the research undertaken by the husband of my mother’s cousin, Neil Munro. I will also include new insights from Australian friends and relatives shared with me via the social messenging site Facebook. So… onward!