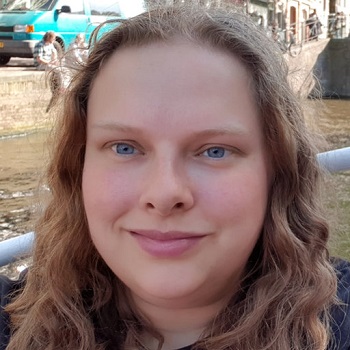 Science is hard. So often we find ourselves stuck in a rut with no idea how to move forward. There’s some question we can’t answer, some experiment or statistical test we need that might not even exist, some gremlin in a machine bent on causing us despair.

Getting stuck can be very isolating, especially if no one in your group or division seems to know the answer. Perhaps the answer lies in a different field entirely? This is a problem amplified by the pandemic with many new staff and students having no idea who they should turn to for help.

Typically we have seminars in the auditorium to listen to very interesting results from complete or near-complete projects, the audience learns about a wide variety of research taking place both on campus and internationally and the speaker gets some feedback on their work. However, at that stage they rarely need that feedback. The people who need input from the community are much earlier on in the process and they’re stuck. 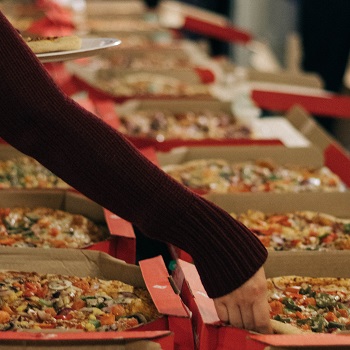 Recently, I asked the director of The Roslin Institute, Bruce Whitelaw, if I could buy pizza for the entire campus once a month. This was not a morale boosting strategy, but was to be used as bait to attract as diverse a set of researchers to one place as possible and create a campus-wide hive mind. Everyone loves pizza (and those who don’t were invited to request their own personalised bait).

Pizza Solves Everything invites researchers of any level and background who are stuck to present very short talks on their problem to an interdisciplinary audience who have been lured there with the promise of free pizza. The talks are less than 10 minutes long, can include slides (but don’t have to) and summarise what they are trying to do, what the problem they have come across is, and what they have already tried to do to resolve it. Importantly no questions are asked in front of the audience. Presenting to a large audience can be an intimidating experience, even more so when you are telling them what you don’t know, and removing the Q&A makes for a more casual experience.

Following the presentations everyone is moved into a large break area where the pizza is, but not before being reminded of the rules:

No judgement: presenting problems is intimidating enough and well all have different backgrounds, perspectives and knowledge gaps

No questions in front of the audience

Ignore the little voice that says discouraging things when ideas pop into your head (“That’s probably not a good idea…”, “I’m sure they have already thought of that…”, “Someone else will probably suggest that…”, “They’re more senior than me, they don’t want my advice…”).

The little voice is not invited to Pizza Solves Everything.

Then through the magic of eight 18-inch pizzas (and a little bit because we have an awesome interdisciplinary community) the speakers get new ideas on how to progress their project through casual conversations. 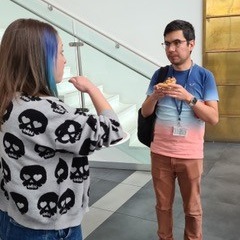 The Easter Bush Postdoctoral Committee hosted our first Pizza Solves Everything on 18 October 2022 and all four of our speakers left knowing what their next step was with their problem either resolved or with promising ideas on how to resolve it. Additionally, several problems that hadn’t been presented were heard being solved in the crowd as the session got people talking openly about their own problems.

Around 90 people attended the event with attendees ranging from students to group leaders from buildings across the campus, as well as our industry neighbours from the Roslin Innovation Centre, and feedback was overwhelmingly positive, not just because they enjoyed the pizza (which we actually ran out of).

Following the event the concept took off on Twitter, with over 277,000 views (at time of writing) and triggered colleagues around the world, and from entirely different disciplines, to plot to host their own versions of Pizza Solves Everything.

We strongly encourage others to pick up this format. Research problems cause a huge amount of stress and frustration and waste staff time and resources, an absolute bargain of around £100 of pizza and snacks got four projects moving again. Additionally normalising talking about problems and building the community are incredibly important steps towards improving research culture.

I will end with the feedback from our four speakers:

“It was a really fun session. I feel it also highlighted really well the various problems faced by people working at the same institute, rather than always seeing a very polished and professional presentation. I managed to talk to quite a few people after the session. They all had really interesting and diverse advice for my research problem and I’ve now got a long list of experiments to try, which has given me some much-needed motivation (and hope!) to solve my cell culturing problem once and for all. I might even volunteer again when the inevitable next research problem arises!”- Pieter Steketee, Postdoc, The Roslin Institute

“The session was helpful to me and exceeded my expectations. As part of the GAAFS, I feared that my research would be too different from what people are doing at Roslin, and no one would be able to exchange ideas with me. However, I was surprised by the number of people interested in my topic and how kind and enthusiastic they were. I left the session with many ideas, reading suggestions, and new colleagues to talk to if needed.” – Jacqueline Tereza Da Silva, PhD student, GAAFS 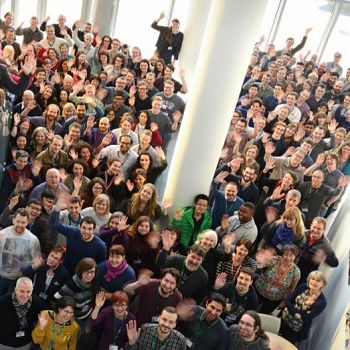 “Having this kind of event was very helpful for my lab work. I received advice from people doing similar techniques routinely and from people who had encountered the same issue in the past. Sometimes people feel like a lab problem is too small to be worth showing to colleagues or that following a protocol should solve everything but that is not always the case as there are many unwritten tweaks that need to be communicated somehow. The setting was comfortable enough to have a casual chat about my troubleshooting and the appeal of free pizza maximised the number of people who could help me.”- Ricardo Corona Torres, Postdoc, The Roslin Institute

“I enjoyed giving my talk! Which is great because normally I absolutely hate public speaking because I worry I’ll get something wrong or people will ask me about something I won’t be able to answer. At the chat afterwards, somebody mentioned that the receptor they were expressing during their PhD 20 years ago fell off the cell, so checking for cell surface cleavage sites in my expressed receptor should definitely go on the design check-list! I can safely say I would not have thought of that until the expressed receptor wasn’t working, and probably not even then. Also, someone suggested looking into getting the Genome Foundry to make all our plasmids so we can try more options in a short space of time.”- Nicky Craig, Postdoc, The Roslin Institute

Those on Easter Bush Campus who would like to present a problem should email Amanda Warr to be included in next month’s Pizza Solves Everything. We promise there will be enough pizza this time.

Pizza solves everything / SCOPE by blogadmin is licensed under a Creative Commons Attribution CC BY 3.0