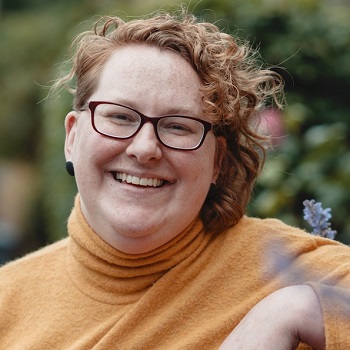 I’m a bisexual scientist. It’s only fairly recently that I’ve said that out loud, and I thought I’d say a bit about why that is and why I’m writing this blog.

So first, when I was starting out, there just weren’t opportunities like this.  Pride yes, but Pride IN STEM?  Definitely not.  I think I completely disregarded the idea that any aspect of my personal identity might be relevant to my science or my academic career. I don’t even remember if I was out at work when I was doing my PhD – which I guess means I probably wasn’t. But not in the closet either – I felt the two were entirely separable.

But there’s another factor too. I’m a cis woman, married to a cis man. I got engaged a month before I submitted my masters dissertation – I know, so young, but I did my undergraduate at St Andrews, notorious for fostering early weddings, so by those standards we were lagging behind. I was married by the middle of my PhD and was pregnant during my first postdoc. Hitting all these heteronormative milestones.

So during that time, my bi identity was completely erased. I am sure I would have gone along with assumption I was straight especially in strongly heterosexual environments like mum and baby groups. I remember that it was really only referenced when I was with people who had known me in my teens and early twenties. And in fact, I even recall the odd old friend saying things like ”remember when you were bi?” as if I had grown out of my sexual orientation.

At work, there was certainly no way to bring it up. I am sure I was – and still am – coded as straight by many.  This has left me with a nagging sadness about not being known, but also a complete inability to work out how to resolve it – short of regaling people with tales of my relationship history, which I was not keen on and in any case endorses the idea that being bi is all about promiscuity.

More recently, I started adjusting my hair and how I dressed to discourage people from coding me as straight – I was delighted when a colleague said they’d assumed I was a lesbian! At the same time, I started to see more Pride in STEM messaging, more people being visible – especially on twitter, which is such a powerful tool for marginalised identities. Finally, it was Bi Visibility Day and I decided to put “bi” in my twitter profile, do the odd tweet, and now here I am.

But I still definitely have some anxiety and reluctance in queer spaces. I worry that I have not had a “proper” LGBT experience.  Because I’ve been able to fly under the radar if I want to, I’ve never been on a Pride march, I don’t have a coming out story. I don’t even feel confident with the language sometimes.

It is easy for someone like me to glide through life looking straight – but it doesn’t feel like gliding. I’ve felt guilty for having it easy and sad for the disconnect between my identity and how I’m perceived. And I guess that’s exactly why its important to write this, even if I worry I haven’t earned a place on this blog.  Because ultimately, bi and pansexual folk belong in STEM, as they do anywhere else. It’s important that we show our faces once in a while.

Bi and pansexual folk belong in STEM, as they do anywhere else / SCOPE by blogadmin is licensed under a Creative Commons Attribution CC BY 3.0