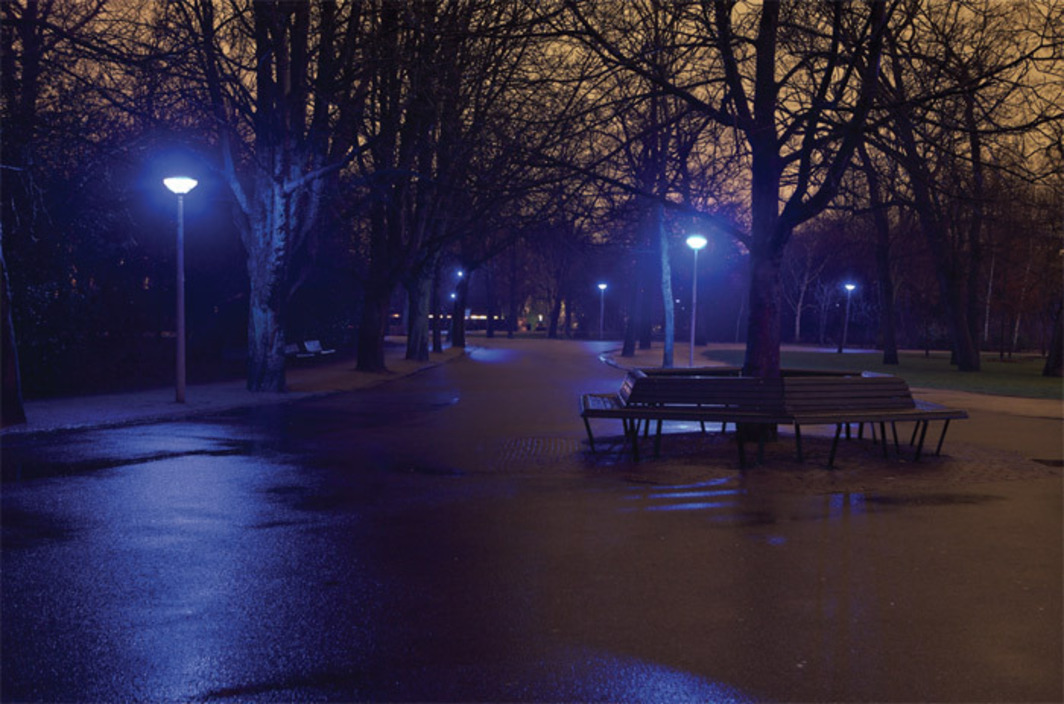 For his project Blues Before Sunrise, organized by the Stedelijk Museum in Amsterdam this past March, British artist and filmmaker Steve McQueen fitted all 275 lights in the Vondelpark with blue filters (Lee #075, Evening Blue). Suddenly Amsterdam’s equivalent of Central Park was bathed in intense midnight blue each evening and night. Dog owners lost track of their four-footed companions, evening joggers faded to dim phantoms, and the cyclists who, in a proud Amsterdam tradition, refuse to use lights of their own whooshed past each other in the azure glow like birds over a darkened sea. Many visitors must have felt they had unexpectedly (and perhaps inconveniently) walked onto the set of a movie, but without knowing what part to play or what the other actors were likely to do.

It may seem strange that McQueen, known for films and film installations, suddenly produced a large three-dimensional work. But his enduring interest in the cinema is actually what made this project such a natural step for him. In fact, Blues Before Sunrise brought together all the major strands in McQueen’s art—including the fascination with light that is especially apparent in his two feature films, Hunger (2008) and Shame (2011). McQueen has said that one inspiration for this work was the song that gave it its title, which was recorded by Leroy Carr and Scrapper Blackwell in 1934 (“Seems like everybody, everybody’s down on me / I’m gonna cast my troubles down in the deep blue sea”). But McQueen’s Blues also seemed to allude to another work of art with a musical title, David Hammons’s legendary Concerto in Black and Blue, 2002. All Hammons did to create his Concerto was to darken New York’s Ace Gallery; the work was performed by the visitors, who were given small blue LED flashlights with which they could illuminate the space. This gave rise to a jittery, mysterious, and unbridled symphony of light—Hammons’s Concerto changed constantly, never remaining the same, even for a moment. In the Vondelpark, too, the color and intensity of the light changed constantly, depending on the weather, the time of night, and the visitor’s location. McQueen’s Blues, like Hammons’s, were never the same twice. With this ever-changing light, McQueen subtly alluded to the crucial “blues feeling”: the sense that something’s playing with your emotions and it’s stronger than you are.

Yet a more powerful association was between Blues Before Sunrise and another work concerning a park, McQueen’s own film Giardini, 2009, made for the British pavilion at that year’s Venice Biennale. McQueen filmed Giardini in the Biennale Gardens at the very end of winter, when no events were taking place in the park and nature was slowly rebounding: Plants were starting to flourish again, insects were leading their fragile lives, and wind and rain were gradually leaving their mark on the site. Yet the true power of Giardini lay in symbolic elements that McQueen himself introduced, especially the lean, abandoned greyhounds scavenging outside the empty pavilions. Part of McQueen’s thinking was that these dogs are normally killed at the end of their racing careers, and are therefore symbols of death.

It was precisely that atmosphere, in which melancholy prevailed and reality became attenuated, that McQueen transferred to the Amsterdam night. As you walked through the park, you became aware that in that moment, everything was wavering, that your usual sense of control had been swept away. In hindsight, McQueen seems to have done his work a little too effectively. After thirteen days, five days before the installation was supposed to end, the City of Amsterdam decided to terminate Blues Before Sunrise “for traffic safety reasons”—it seems an accident had occurred in the eerie blue light. Who knows whether the project was really to blame, but in any case, McQueen had clearly managed to disorder the experience of the Vondelpark.

Sites Related Artist / Leah Wood by blogadmin is licensed under a Creative Commons Attribution CC BY 3.0
Posted on 12th April 2022 Posted in Sites